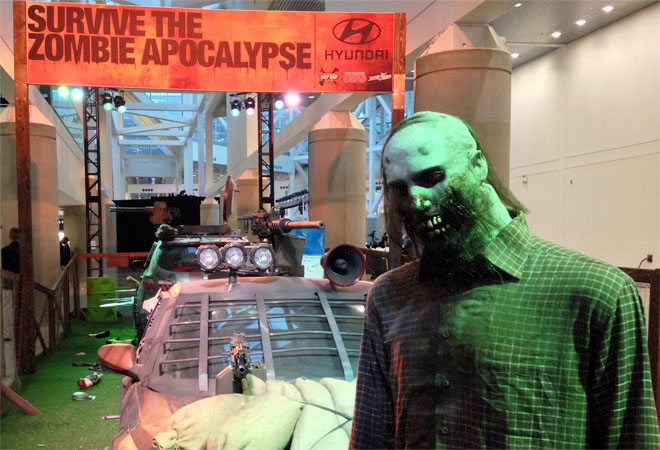 Hyundai’s Walking Dead themed display serves as a reminder not to eat or drink near the cars.

Never been to an auto show? Been to thirty auto shows but still not sure if you are up to Miss Manners’ standards? I went to the L.A. Auto Show at the Convention Center for the first time this year and wasn’t quite up to speed with car show etiquette: Was I allowed to touch the cars? Should I pretend like I already knew all of the stats? Would it be like the zoo, where I could talk loudly, or more like the Louvre, where everyone whispers?

After hours of observation of my fellow car show goers, I compiled this list of Auto Show Do’s and Don’ts, handy for buyers, thrillseekers, or simply those looking for a hydrogen-fueled day out.

Do: Give yourself enough time…
…And make sure that time includes a coffee break. If you rush through, all of those headlights start to blur together.
Don’t: Get stuck with one car
If you’ve already touched every square inch of the car, sat in every seat twice, and publicly announced a list of the roads on which you’d drive it, then it’s probably time to move on. No worries; you can always come back!

Do: Ask questions
Don’t: Hit on the experts
Those ladies around the cars may be sexy, but they are also black belts in car knowledge who have graduated from qualifying programs within their company (read: they know their stuff).

Do: Pretend like you can make it rain
Getting bogged down by the astronomical prices can take the fun out of the experience. It’s perfectly fine to imagine that you are a trillionaire with plenty of garage space.
Don’t: Make any rash decisions
Like I said, coffee breaks are important, if only to prevent you from slapping down your Visa for the new Porsche 918.

Do: Join the conversation
Think of some impressively bad car metaphors and discuss them with the other chin-scratchers around the vehicle. The best worst metaphors I heard were: “dinosaur head,” “the Pringle man’s mustache,” and—my favorite—“a grandma’s bra.”
Don’t: Be a hater
If the sight of a Nissan makes you gag, then move on. Stay positive at the show and wait until you get home to craft a grumpy Facebook status.

Do: Practice polite Instagramming
This may be the only time you will get near perfect light for a photo with the new Jaguar, so choose your filter wisely.
Don’t: Push people out of the way for a perfect shot
Be patient and photoshop those slow pokes out later.

Do: Take a test drive
Or twelve. This is the best way to get to know cars. Think of it like speed dating.
Don’t: Forget traffic laws
Yes, test-driving is like speed dating, but remember that there is still a speed limit.

Do: Bring the family
How else will you know if all five of you and the dog will fit into the new Smart Coupe?
Don’t: Let your children run rampant
Though this might be the most tempting hide-and-go-seek arena in Los Angeles, keep those nuggets under control. This also goes for car buff boyfriends, girlfriends, and grandmas–be sure to use your indoor voices!