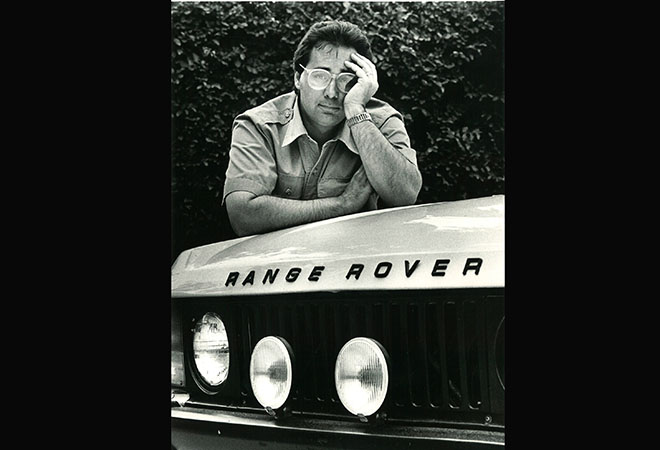 When Joe Molina was a kid growing up in Orange County, he would make (collect) calls to car factories in Europe to order brochures about automobiles that weren’t sold in the United States. Even though he didn’t have a driver’s license, he would arrange to go on luxury car test drives, giving a friend’s address as a pick-up point so his dad wouldn’t know he was riding around in Aston Martins.  After graduating high school, he joined the Army as a rock journalist, hoping to earn enough money to buy an exotic car of his own.  When he was twenty-two, he left the music business to start his own company.

Thirty-five years later, that company, JMPR, is the one of the most in demand lifestyle and automobile public relations firms in the country, with clients like Bentley, Bugatti, and Infiniti. Molina’s childhood hope that he would someday own his dream car has come true tenfold; throughout his presidency he has owned over eighty of the world’s most beautiful cars, including a 1973 Lamborghini, 2007 Maserati, and 1956 Bentley Continental.  As he prepares for the LA Auto Show later this month, we got to chat with him about cars, the immense success of his company, and the difference between life and living.  Here, the motor maven shares some words of wisdom:

On Cars and Youth:
“I didn’t buy a car until I was 21. I just didn’t have the money. My first car was a 1971 Volkswagen Super Beetle. It was green with a white interior. A guy owns an exact copy of it in Michigan, and I’ve been tempted to buy it. I’ve traded, bought, and sold all the cars I wanted to own as a kid.”

On Cars and Life:
“When my father passed away, we had a ’66 Chevy Caprise wagon. I bought it from my mom and worked out my grief: I restored the car, built it up into a hot rod, and used it for eleven years. Then I sold it. My therapy session was over.”

My cars reflect my history: the license plate of my first Lamborghini had my high school’s initials on the plates, and I bought a replica of the car I met my wife in.  She recently passed away from breast cancer; we were together for as long as JMPR has been around—thirty-five years.”

On Cars and Living:
“You need to find what moves your heart. Take a lot of test drives. You can’t own a Porsche when you’re six feet under, and you don’t want your last breath to be, ‘Gosh, I wish I had bought that Bentley.’ Find your passion. Find what makes your heart flutter.  If you can’t afford the car, you can rent them – you can’t buy happiness, but you can certainly rent it.”

On Cars and Art:
“My wife and I collected art and cars together. Contemporary art and collectible, exotic cars are the icing on life. Nobody needs these cars; they are accessories. More people need to reward themselves with a good car. It’s like a good bottle of wine, there’s something about it that lifts your spirits. Even just seeing it parked in the driveway. Cars are mobile dreams, and in L.A., the city of dreams, it all fits.”

On Cars and Los Angeles:
“The freeways in L.A. are the only downside [to the city] because the only thing you get a chance to do is rev your engine, gas, brake, gas, brake. There is nowhere to test a car’s speed, except for the 210, maybe, around sunset. I should have ended up in jail making license plates so many times for how fast I’ve gone on that road.”

On Cars and the L.A. Driver:
“I think in many cases, their cars are more important than their homes, and the way traffic goes, [Angelenos] will see their car more than their house. Something that is unique to L.A. is that people aren’t afraid to show success on four wheels. There is an attitude that it’s all right to have fun, to show off, and to have some individual flair. This city is really cool because there are two important things people look for when buying luxury cars: speed and what it looks like arriving and leaving. Any cars above $35,000, you don’t need for transportation, it’s a statement of how you feel. That’s an important aspect of L.A.; that’s why all the auto trends start here. We are defined by what we drive.”

On Cars and Sharing:
“If there are kids looking at my car, I’ll take them for a ride. One time, this guy who works at my pharmacy complimented my car, so I threw him the keys and said, ‘See you in fifteen minutes.’ It changes people’s lives. Kids never forget, and that’s how you keep the dream alive. It’s better than only driving the cars in Grand Theft Auto.”

On Cars and What Matters:
“Eating, drinking, and driving. Not necessarily in that order.”

A Look at Joe’s Journey: