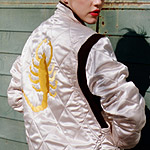 Let’s talk about something I will never do again: mistake a Lamborghini for a Ferrari.

It all started when I arrived at 1232 Sunset Plaza, a massive property in the hills overlooking Sunset Boulevard. Black and white Lamborghinis lined the winding driveway. The black ones looked like Batmobiles, and the white ones were—and I’ve never said this about a car—sexy. I was hot and bothered before I even saw the event’s prized showpiece: a 2013 Lamborghini Aventador LP 700-4 Roadster.

Women in ice-pick-sharp high-heels sipped on Old-Fashioneds, and almost all of the men wore sport coats. I even spotted a few guys donning driving gloves while helping themselves to tiny plates of even tinier octopi (the event was catered un-ironically by Ink.). I myself stuck to free chocolate and whiskey. From the outside, 1232 Sunset Plaza looks like an apartment complex. Turns out it is a $28.8 million seven-bedroom home boasting an infinity pool and a massive guesthouse (the closets of which are bigger than my entire apartment). Needless to say I was more than a little stunned by the time I made my way to the Lamborghini Aventador LP 700-4 Roadster (I dare not create a nickname for it), which looked so natural and angular near the infinity pool that it just as easily could have been a piece of modern art.

After some encouragement from a leggy blonde Lambo employee named Charleyta, I clunked down into the driver’s seat, surprised at how low the car was. Everything was white: white detailing, white leather, white steering wheel. I checked my fingers for chocolate.

There isn’t much to do in a stationary Lamborghini parked in the driveway of a mansion. So I resorted to my imagination: all of a sudden I was cruising down the PCH at an ungodly (read: illegal) speed, miraculously filled with the knowledge necessary to utilize all seven gears. Charleyta caught me voguing a little too enthusiastically with the steering wheel, but I allowed myself a minute more of daydreaming before unfolding myself from the machine. This is a Ferrari. How could I ever mix these cars up?

I moseyed over to the car’s passenger side, where a group of people stood to admire its butterfly doors (truly the stuff of rap anthems). “This is the closest I’ve ever been to a Ferrari,” I said, trying gracefully to insert myself into the conversation. A hush fell over the crowd. A man dropped his whiskey in shock. No one would meet my eye. The Spanish fighting bull on the car’s delicate hood decal twinkled in the purple light of dusk, and I realized my mistake. This car wasn’t just some Ferrari. This was the 2013 Lamborghini Aventador LP 700-4 Roadster! There are less than 1,000 of these cars in the whole world. This car’s V-12 engine is so inspiring that its designers added hexagonal windows to its back hood so that people could behold its might (700 horse power). This car can go 0-100 mph in less than the time it takes you to refresh your Facebook feed. I needed to be more respectful.

I cleared my throat and apologized to both the group and the car before shoveling free bon bons into my mouth in an effort to quell the embarrassment. Next time, I’ll be sure to double-check a car’s nameplate before speaking.