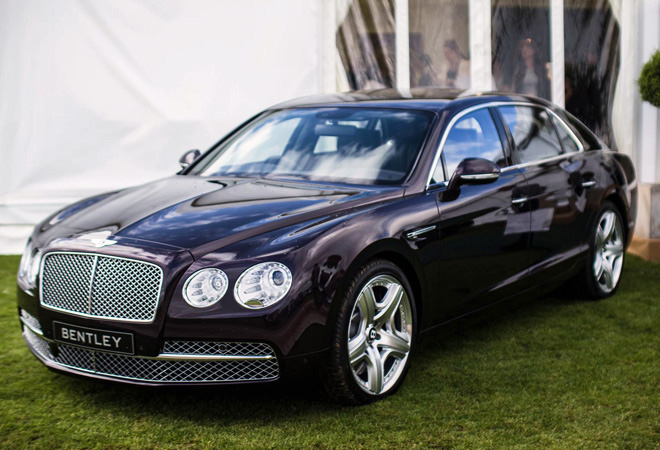 The Bentley Flying Spur in the color Damson.

“So, how long have you been into cars?” I get this question a lot at car events, and I’m still working on my answer:

“Well, I’ve been in this car for about two minutes.”

The truth is, I’ve never been “into” cars. I often mistake V-8 for that one tomato drink, and horsepower sounds like a club I might have joined in third grade with other girls who exclusively wore Lisa Frank pony t-shirts. Which might explain why I was so nervous when my editor sent me to report on a luxury car premiere.

Walking into the pseudo-lawn party at O’Gara Coach Company, all I could look at was the New Flying Spur Bentley, majestic atop its throne-like platform. As I circled the beast like an anxious bullfighter, a pair of older men in grey suits and bowties set down their glasses of white wine and opened its gleaming rear doors, admiring the creamy beige leather and the surprising amount of legroom in the back seat. When they got out, they popped the hood and admired the W-12 engine (which, courtesy of its two cylinders, actually looks like a letter “w”). “Does anyone ever sit in one of these and then decide to buy it right then and there?” I asked the man standing next to me, who happened to be a professional driver for Bentley. I struggled to comprehend how someone could, on a whim, purchase a car starting at $200,000 (the base price for those who don’t care to have a home theater installed in the backseat) and so racked my brain for a frame of reference. The $10,000+ wedding gowns from TLC’s Say Yes to the Dress came to mind, ones iced with Swarovski crystals. You try it on, and you just…

“No,” he said. “Most people who buy Bentleys never come to look at the car. They hear a new one is coming out and make the call.”

When I asked my new driver friend what he loved most about the Flying Spur, he got misty-eyed (yes, seriously) and motioned to the car’s trunk area. “They really got it right this time,” he said, running his hand along the shapely curve.

After watching a parade of women in tight dresses slither in and out of the Spur’s front seat, I stepped up onto the platform and opened the door myself. I noticed that the paint wasn’t black, as I had assumed; it was a deep purple, so dark that its true color was only visible in its shine. Very lovely. I slid awkwardly into the front seat, silently vowing never to wear a skirt in public again. The inside was beautiful, too: handcrafted woodwork gleamed from the doors, armrests adorned both seats, and even the steering wheel was covered in smooth, sweet-smelling leather. Oddly, though, the driver’s space was cramped. I could have comfortably curled up to watch a movie with two of my biggest friends in the backseat. Why was the front seat so small in comparison?

Then it dawned on me: the car was designed for a chauffeur.

A mini-theater might be appealing during one of L.A.’s classic rush hours, but if I were in a car with the ability to reach 200 mph, I would absolutely want to be the one in the driver’s seat. So—anyone need a private driver?