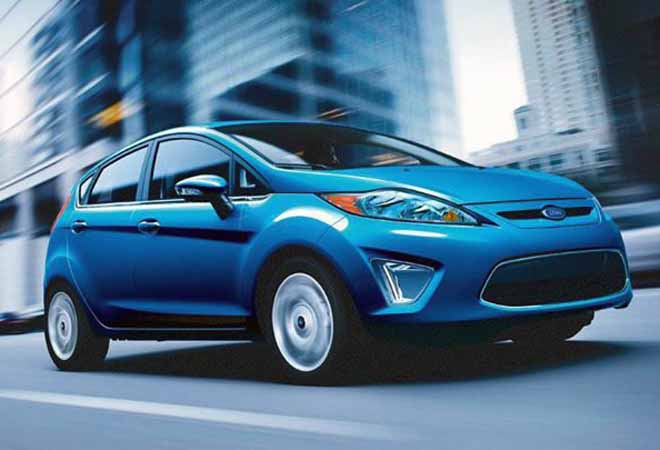 A visual interpretation of what it feels like to test drive a 2014 Ford Fiesta in Candy Blue.

Nearly every car event I’ve ever been to has requested I bring a valid driver’s license, if only to prove my age whilst ordering a drink from the bar. My invitation to the Ford Fiesta test drive event at Santa Monica’s Viceroy Hotel on July 24th was no different, although seeing as how I would actually be getting behind the wheel of a vehicle this time (promptly at 9:00 a.m., no less), I was certain there’d be none of the whiskey and champagne I’d freely sipped at past Bentley and Lamborghini events. Marginally disappointing? Maybe. But after I finished signing the insurance papers (“can you not crash our car?”), I found something better than booze waiting in Ford’s private room: coffee and parfaits. Parfaits served in tiny glass jars, like some kind of poster-food for Pinterest. My mom always says “don’t judge an event by its nibbles,” but I couldn’t help but feel immediately understood and taken care of by Ford Motor Company.

Even beyond the choice in adorable glassware, it was obvious to me that I am the target demographic for a 2014 Ford Fiesta. The marketing team informed attendees that this past year has shown a significant increase in buyers ages 18-35 (check), and most of those consumers were purchasing their first cars (double check). I am nestled right in that age range, the proud first-time owner of 2011 Fiesta that I rescued from its past life as a rental car. The 2014 models we were test driving were tricked out with “Ford Touch” screens, Sony speakers, and the now-standard electric steering, but the familiar was still there: that ding-a-ling sound reminding me to turn my lights off, the mirrors that notify me when a car is in my blind spot (a feature I happen to be completely dependent on). My Malibu view from the passenger’s seat. Note the blind spot meta-mirror.

The Ford team instructed us to break off into pairs for the drive. Car companies, it turns out, keep a special fleet of cars meant specifically for the media to drive and review. A lineup of such Fiestas was waiting for us in the parking lot, ready to be driven down the One and into the Malibu mountains. I coupled off with the first person to ask, a red-haired guy in khakis that were a little too big for him. We were handed a key, directions, and a folder filled with pamphlets. I flipped through and found no conversation cue cards. The drive would take two hours.

My car buddy took first shift. Our itinerary steered us through Malibu Canyon, where the twisting road resembles one of the more rickety wooden roller coasters at Knott’s Berry Farm. When traffic halted our journey, he shared that he drove this route all the time, especially on the weekends when celebrities like Fabio and Jay Leno sped through in their impeccable sports cars. I noticed the black skid marks that chaffed most of the tight turns and was relieved that we weren’t going to be testing the little Candy Blue Fiesta’s power that day.

We finally made it to our driver switch destination, a sweet, rustic winery I mentally filed away as a potential date spot. A few of the drivers who beat us there were standing around one of the other Fiesta’s bumpers casually scratching their chins, as if the small car were a new racehorse that might be worth betting on. Before my car buddy could get wrangled into their conversation, I slid into the driver’s seat, claiming that I wanted to win the race back to the Viceroy. Really though, I didn’t want him and the other drivers to talk to me long enough to realize that everything I know about electric steering I learned from Google. Besides, the longer we stood debating the age old Hatchback or Sedan?! argument, the longer we were keeping ourselves from the delightful Mason-jarred meal that was waiting for us at the hotel.

Unfortunately, those cliffside Malibu roads have more twists than an M. Night Shyamalan movie, meaning I stayed under the speed limit almost the entire way home. Car Buddy, still constrained by the seat belt of politeness, hid his frustration with my consistent braking by telling me stories about other cars he’d driven, like the Tesla he had on loan for the week. How could I keep up with that? “I saw Patrick Dempsey touch leather pants once,” I offered. For the rest of the drive, I listened to the air conditioner.

When we pulled into the Viceroy parking lot (last, thanks to my feather foot), Car Buddy and I mechanically exchanged business cards before heading inside for lunch. My inner teenager wanted to say something to make our two hour journey more memorable, less awkward, but the grown up me, the me that has keys to her own Ford Fiesta, was really looking forward to cheesecake. It was served in jars—perfect.

Christina Wolfgram is a blogger who, like most Angelenos, pretty much lives in her car. Her mission? To investigate the California car-mosphere. Visit CityThink every other week to experience L.A. from this Lady Driver’s perspective, and follow her adventures on Twitter @TheCWolf.

The IQ of Ford Consoles Is About to Sky-Rocket

14 Ideas to Kick Carsickness to the Curb

Selling Off Unused Parking Meter Time: There’s an App for That