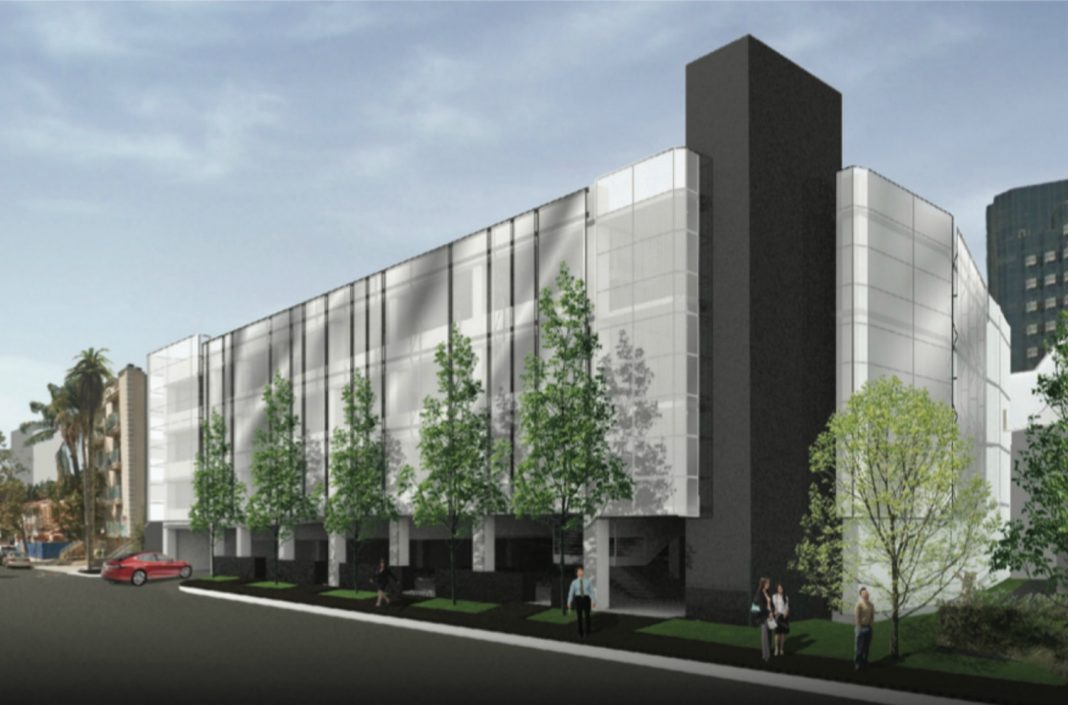 Swiss architect Peter Zumthor spent 11 years drawing up plans for an ambitious reinvention of the Los Angeles County Museum of Art. After multiple drafts, the fruits of his labor were made public, and many had a strong negative reaction to the proposed overhaul. Critics across the city decried the project—which would replace four of LACMA’s existing buildings with a single beige, concrete structure spanning Wilshire Boulevard—describing it as a freeway overpass, a toll booth, a Palm Springs motel, and a coffee table.

The complaints, however, failed to move the the county Board of Supervisors, which  approved a $300 million bond for the project.

The project finds itself steeped in controversy yet again, this time over something characteristically L.A.: parking. A lawsuit filed against the county and LACMA alleges that the county and the museum violated state environmental regulations by approving construction of a five-story parking lot on Ogden Drive without anticipating the impact on the neighborhood. The suit, filed by the nonprofit Fix the City, contends that the county did not consider how the nearby Purple Line expansion might attract commuters looking to drop off their cars and ride the Metro.

“You only have so many parking spaces,” says James O’Sullivan, director of Fix the City. “What are you going to do about people who would just park there and take the subway?”

Fix the City’s suit relies on the California Environmental Quality Act, a landmark state environmental regulation passed in 1970 that requires developers to identify and mitigate the environmental impact of their actions. Developers must release their findings and mitigation proposals in an Environmental Impact Report. Neighborhood groups recently have used CEQA to oppose homeless shelters proposed for their districts.

In response to earlier questions submitted by O’Sullivan, the final impact report proposes a fee system and validation program at the parking lot “to discourage non-LACMA visitors from utilizing LACMA parking facilities.” Additionally, the county predicts that overall parking demand will shrink once “the station portal for the future Metro Purple Line Wilshire/Fairfax Station is open and operational.”

“With the opening of the Metro Purple Line station at Wilshire/Fairfax anticipated to coincide with the opening of this new museum facility, it is expected that a significantly lower portion of museum visitors would arrive by private automobile, and, thus, parking demand would decrease,” the report says.

Still, O’Sullivan worries that enterprising subway riders might try to game the system, either paying for an annual membership with parking privileges or just shelling out for the daily rate as if they were going to the museum.

“People could drive to the parking lot, park their car, go in and take the subway, go downtown, come back,” he says.

Whether or not the courts agree with O’Sullivan and Fix the City, the proposed parking structure also faces opposition from the Miracle Mile Residential Association, a local neighborhood group. (In addition to his role as director of Fix the City, O’Sullivan serves as the president of MMRA. In this matter, O’Sullivan says, he has let MMRA vice president Ken Hixon take the lead for the association.)

Unlike Fix the City, MMRA’s grievance stems from an alleged violation of the Community Design Overlay, a community-ratified set of zoning strictures.

“The only kind of parking structure that the CDO allows is one that could be two stories high, but it has to be directly part of and connected to a building or project along Wilshire,” Hixon says.

But in its earlier responses to comments, the county points to decades of state legal precedent that exempts county-owned property from city zoning and building ordinances.

“It is well-settled in California law that the city and the county are mutually exempt from each other’s building and zoning codes,” the county writes.