Home L.A. History As Demolition Transforms LACMA, a Look Back at Its Glory Days

The hair was high, the gowns were sparkly, and in March 1965, one percent of the one percent were out in full force for the debut of the Los Angeles County Museum of Art.

Movie stars Bob Hope and Vincent Price were there, mingling with all the names we know today as plaques on buildings: Ahmanson, Taper, Norton Simon. Peter Bing was there, too, munching beef Wellington and crab legs. The museum’s theater would be named for his father, Leo.

That hall was the first to fall this week as four structures on the LACMA campus—the Ahmanson, Hammer, and Art of the Americas buildings, in addition to the Leo S. Bing Center—are demolished to make way for a proposed replacement, a flash Peter Zumthor-designed amoeba that would span Wilshire Boulevard. The work is happening on an unusually quiet Wilshire Boulevard, while we’re all cooped up at home and few will see the buildings come down.

When the complex first opened all those years ago, the Los Angeles Times gushed about the “many-fountained splendor” of the “magnificent” complex. Los Angeles called it “dazzling” and featured it on our cover four times during the ’60s. The museum didn’t have much of an art collection back then, but it was widely perceived as putting Los Angeles on the art world’s map. It signified a major milestone in the city’s development. 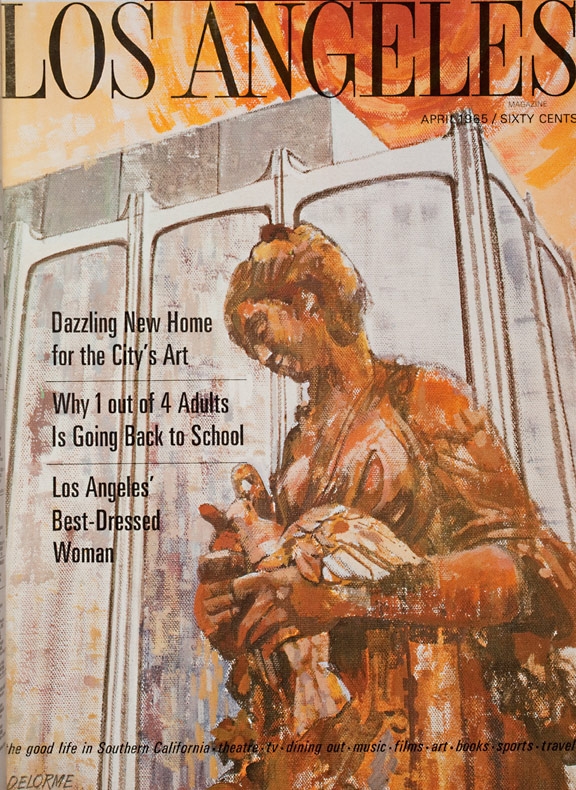 William Pereira, who also dreamed up CBS Television City and the Transamerica pyramid in San Francisco, designed the New Formalist compound. The original sandstone-clad buildings were originally seen on a raised platform behind a massive pond dotted with fountains spraying high into the air. An enormous steel starburst spinning in the breeze was at the center of it all. For the last three decades, this delicate composition has been hidden behind a big blank wall that runs the length of the museum, turning its back on the city and hiding the elegant original from view.

Nancy Sinatra set part of her 1967 TV special Movin’ With Nancy at the original LACMA, crooning a sad song in a raincoat surrounded by facsimiles of elite patrons of the museum. She’s cheered up by “fairy Goduncle” Dean Martin. The whole special is fantastic and filmed all over L.A.; you’ve got to see it.

The museum had been chipping away at the complex for weeks during the asbestos mitigation phase of the demolition, but the big mechanical beasts came out this week to tear into the Bing theater in a scene so brutal it could have been staged by Alfred Hitchcock, another guest at that fancy gala when the museum was shiny and new.