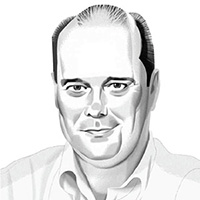 Age: 52. Occupation: USC history professor and head of the Huntington-USC Institute on California and the West. Books he’s written or coauthored: Eleven, including Blackwell Companion to Los Angeles and Whitewashed Adobe: The Rise of Los Angeles and the Remaking of Its Mexican Past. Two of the books he is working on now: One about the post-Civil War American West and one about three-year-old Kathy Fiscus; her 1949 plight in a San Marino well became a major media event. “It marks a certain transition from television as an amusement to television of newsworthy, even eyewitness, capability.” Why Southern California captured his curiosity: “It’s environmentally complex; its metropolitan history is very complex; its social, demographic, and racial history is very complex.” One notion that fires his imagination: “The amazing array of archival sources that are still in garages, closets, and attics. It’s just terribly exciting to run across archival holdings of a family’s odyssey to, let’s say, Southern California in the early 20th century.”