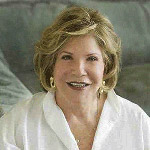 Photo courtesy of the Annenberg Foundation

The firstborn daughter of publishing tycoon, broadcast pioneer and philanthropist Walter Annenberg, Wallis Annenberg was born in Philadelphia in 1939. After just one year at Columbia University in New York, Annenberg dropped out of school to marry Seth Weingarten, who was then pursuing a career in medicine. The two moved several times before settling in Los Angeles, where Annenberg worked as a liaison to the television industry for TV Guide magazine (a company her father owned for 16 years before selling it to media-mogul Rupert Murdoch). Annenberg and Weingarten had four children before they divorced in 1975.

Annenberg took the reins as President of the Annenberg Foundation in 2009—seven years after her father’s death—following the passing of her stepmother. She continues to follow in her father’s footsteps not only by preserving the Annenberg legacy but by pursuing their shared commitment to public service. Today, the 73-year-old spearheads the Foundation as Chairman of the Board, President and CEO. Her philanthropic accomplishments include the 2009 opening of the Annenberg Community Beach House in Santa Monica, Los Angeles’ first and only public beach club. With Annenberg’s support, many other community-minded projects have come to fruition, including the Annenberg Space for Photography and the Wallis Annenberg Center for Performing Arts. Annenberg is also known for her generous grants and her dedication to a number of organizations for education and youth development, arts, culture and humanities, civic and community life, health and human services, and animal services and the environment. She was interviewed by Maria Shriver for our October 2011 issue on the L.A. Woman.

“I’ve never had a problem using the Annenberg name. That’s who I am, and I’m happy to be that. I’m very proud of it. But I want to be worthy. Because it opens a lot of doors, and I want to be the best person I can to walk through them.”

KCRW and the Annenberg Foundation To Present Free Concert Series

Powdered Wigs and Bidding Wars: Behind the Scenes of The Los Angeles Ballet Gala