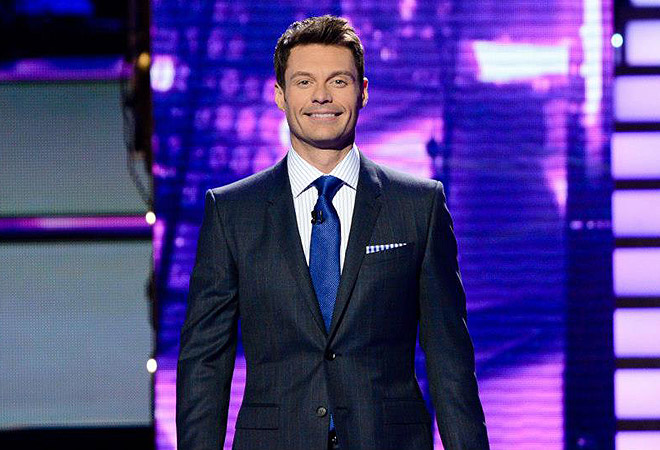 Radio personality and TV host extraordinaire Ryan Seacrest was born on Christmas Eve in a suburb of Atlanta, Georgia. He had showbiz on his mind from an early age—according to his mother, Seacrest would use a toy microphone to do shows around the house as a boy. By the time he was a junior at Dunwoody High School, Seacrest had not only become the voice behind the school’s morning announcements but had landed a behind the scenes internship with WSTR (FM) in Atlanta, where he was mentored by Georgia radio royalty Tom Sullivan. Seacrest’s career in radio took off, though, when a WSTR DJ called in sick one evening: As a last minute stand-in, he did well enough to earn the weekend overnight shift at the station, a gig that lasted until he graduated high school. Though he enrolled in the University of Georgia to study journalism, Seacrest moved to Hollywood at the age of 19 to pursue a career in broadcasting.

After hosting a number of shows throughout the ’90s, Seacrest hit the proverbial jackpot in 2002 when he accepted a position co-hosting the then-unknown American Idol. The show, now in its 13th season, achieved national success, making Seacrest a household name. Along with his Idol gig, Seacrest hosts the #1 nationally syndicated radio show, On Air with Ryan Seacrest, on Clear Channel’s 102.7 KIIS-FM as well as a nationally syndicated Top 40 show. He is also the host and executive producer of Dick Clark’s New Year’s Rockin’ Eve With Ryan Seacrest on ABC. In 2006, he launched Ryan Seacrest Productions, which produces various shows for Bravo, A&E, Esquire, ABC, AOL, Telemundo, and E! Network, including the highly-rated Keeping Up With The Kardashians.

In 2009, Seacrest and his family started Ryan Seacrest Foundation, a non-profit that strives to enhance the quality of life for seriously ill and injured children. The organization builds broadcast media centers inside of hospitals so that children can apply their creativity to radio, television, and new media technologies. On July 29th of this year, Seacrest opened his fifth studio at Levine Children’s Hospital in Charlotte, North Carolina.

NBC confirmed in August that Seacrest will be hosting their new game show, The Million Second Quiz, this September.

* Forbes named Seacrest one of the 400 richest in America, estimating his net worth at $200 million dollars.

“I always just wanted to be a cheesy guy on television.”