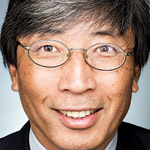 The richest man in Los Angeles was born in Port Elizabeth, South Africa in 1952 to Chinese immigrant parents. An aptitude for academics presented itself early on: He graduated high school at 16, medical school at 23, and went on to earn a masters in science from the University of British Columbia, where he was the only resident to receive multiple awards in research simultaneously from three different surgical educational associations. Upon moving to L.A. in 1979, he enrolled at UCLA and became a board-certified surgeon, pioneered new methods for treating diabetes, invented the cancer drug Abraxane, and developed two multi-billion dollar pharmaceutical companies (American Pharmaceutical Partners and Abraxis, both of which he has subsequently sold). All this, and he’s generous, too: Soon-Shiong and his wife, Michele Chan, are the founders of the Chan Soon-Shiong Family Foundation, which has given $135 million to the Saint John’s Health Center in Santa Monica and $100 million to Martin Luther King Hospital in South Los Angeles in addition to other gifts.

“I want to do transformational work to actually fix the world. But [I want] to fix things in our own country first.”

RELATED: Read “A Wealth Of Reasons,” our April Q&A with Patrick Soon-Shiong

Meet the 26 Local Billionaires Who Made the Forbes 400