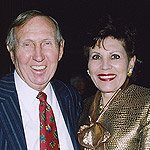 Los Angeles power couple John E. Anderson and his second wife, Marion, established their non-profit foundation in 1986. John, who was born in Minneapolis, Minnesota in 1917, attended UCLA for his undergraduate studies and went on to earn a Master of Business Administration at Harvard University and a Doctor of Jurisprudence at Loyola Law School. He began his career as a beverage wholesaler (he earned the exclusive right to distribute Budweiser in Los Angeles) and later leveraged his profits into retail and financial services, accumulating 33 subsidiaries in the areas of real estate, insurance, beverage distribution, and automobile sales. He also launched Topa Equities, of which he was both the president and chief executive until his death on July 29, 2011. A philanthropist, Marion currently serves as Vice Chairman of Topa Equities and has sat on the Board of Trustees for Children’s Hospital Los Angeles since 1989. She also gives her time to First Families, Children’s Fund 100, The National Art Association, ARCS Foundation, Diadames of the Child Care League, Blue Ribbon at The Music Center, Phoenix House, and Claremont McKenna College (among others). In conjunction with Dr. Cheryl Saban, Marion recently donated $10 million to the building of a walkway that connects the Marion and John E. Anderson Pavilion to The Saban Research Institute at CHLA.

They said it:
Marion: “Philanthropy doesn’t have to be just about money. No matter how much or how little, get involved. When you do, you really begin to understand the meaning of what philanthropy is—of what caring is. You get so much back. I can’t explain this to people because they think, ‘Well, you know, it’s just talk.’ It’s not talk. You have to do it to realize the importance of it.”

John: “It is very important to give back, and philanthropy is uppermost in mind. We have a foundation, and we try to makes contributions that are meaningful. We make a practice of making contributions every month. It is a privilege to be in a position to help to others.”