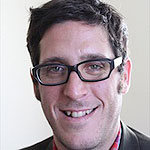 Joel Arquillos is the Executive Director at 826LA, a nonprofit organization dedicated to encouraging students to write and to helping teachers inspire their students.

Before joining the 826 team, Arquillos taught social studies in the San Francisco Unified School District at Galileo Academy of Science and Technology for eight years. He was a celebrated presence at Galileo, earning himself the title of Teacher of the Year in 2001. Arquillos left the traditional classroom in 2006 to work as Director of National Programs with the founders of 826 National (the umbrella organization for 826LA and its sister chapters). In 2008, he relocated to Los Angeles to take on the role of Executive Director for 826LA.

With the help of Arquillos, the 826LA offers after-school tutoring, field trips, workshops, in-school programs and publishing. In 2010, the organization hosted a songwriting workshop for its students, who wrote and performed original lyrics and music. To honor the students’ work, many professional musicians volunteered to record an album of the songs composed in the 826 workshop. One of its tracks, “So Sleepy”, was featured in Judd Apatow’s film This is 40.

Arquillos’ own background allows him to identify with the children he serves. The son of a Spanish father and a Cuban mother, Arquillos was rarely read to as a child. His upbringing led him to understand the indispensable role of reading and writing skills in childhood development. He emphasizes that fostering such skills opens a world of opportunity for students by allowing them to develop stronger critical thinking skills.

“In the end we might inspire a few of tomorrow’s novelists, but what we hope to give all the students we worth with is the ability to communicate clearly and effectively. That is the most important tool we can equip our students with.”