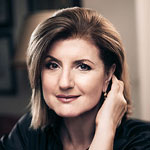 Sixty-three years ago in Athens, Greece, the founder and editor in chief of The Huffington Post was born. Arianna Stasinopoulou, the daughter of a struggling newspaper publisher and a nurturing mother, has become one of the media’s most influential women since HuffPost’s creation eight years ago.

At 16 years old, Huffington was awarded a full scholarship to study economics at the University of Cambridge, which led her to the United Kingdom. After graduating six years later, she moved to London, where she published her first book, The Female Woman, attacking the feminist movement and establishing herself as a controversialist.

Backed by the royalties from her first best-selling biography, Maria Callas: The Woman Behind the Legend, Huffington left London for the Upper East Side of Manhattan in 1980. Dating powerful men and hosting renowned dinner parties boasting prominent guests like Oscar de la Renta, Barbara Walters, and Plácido Domingo earned her the status of a socialite. But city life left little time for Huffington to work on her next book, a Picasso biography, and after four years she left New York for Los Angeles. A year later, she was introduced to her future husband, Michael Huffington, by oil heiress Ann Getty. The couple married in 1986 in San Francisco and later settled in the hills of Santa Barbara where they had two daughters.

In 1997, Huffington’s marriage dissolved. She divorced her husband and moved to Los Angeles, where her political activism skyrocketed. Though Huffington had previously been an active supporter of the Republican platform, she detached herself from the party in the mid ‘90s. In 2000 Huffington organized the Shadow Conventions, an alternative to the Republican and Democratic conventions. She then ran as an independent candidate for California governor against Arnold Schwarzenegger in the 2003 recall election. After failing to garner much support, she appeared on Larry King Live to drop out of the race.

Huffington shifted her efforts from politics to journalism in 2005 when she launched The Huffington Post, a news and blog site that has since become one of the best-known online media brands. In 2011, she sold the site to AOL for $300 million in cash and was appointed as the president and editor-in-chief of the newly-formed Huffington Post Media Group, which included The Huffington Post and other AOL properties such as AOL Music, Patch Media, and StyleList. Just seven years after its inception, The Huffington Post won a Pulitzer Prize for national reporting.

Though her focus remains on The Huffington Post, Huffington also serves on several boards, including EL PAIS, PRISA, the Center for Public Integrity, and the Committee to Protect Journalists. In the past decade she’s been named to many lists of influential people, including Forbes’ Most Powerful Women, Forbes’ Most Influential Women in Media, and the Time 100.

“Fearlessness is like a muscle. I know from my own life that the more I exercise it the more natural it becomes to not let my fears run me.”