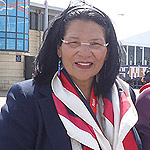 Former American Olympic athlete, International Olympic Committee member, board member of the United States Olympic Committee, and Vice President of the International Rowing Federation (phew!), Anita L. DeFrantz was originally and East Coaster, born in Pennsylvania in 1952. Growing up with very little exposure to sports, she had never planned for a career in athletics; rather, she envisioned herself as a practicing attorney and perhaps even a judge. Her trajectory changed, however, after discovering rowing at Connecticut College. Between her undergraduate work, applying for (and attending) law school, and passing the Pennsylvania bar, DeFrantz competed in the 1976 Olympic games and won the bronze medal. In 1984, DeFrantz participated in the Los Angeles Olympic Organizing Committee, and was subsequently named President of the LA84 Foundation in 1987.

A legacy of the L.A.’s 1984 Olympic games, the focus of non-profit organization LA84 is philanthropic work in the arena of youth sport, providing grants to organizations in the eight southernmost counties of California.