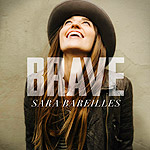 Singer-songwriter Sara Bareilles just wants to see you be “brave.”

The “Love Song” chanteuse released a music video for her new single, “Brave,” just this week (directed by fellow Angeleno Rashida Jones, no less). Aside from being a spunky, Glee-esque nod to lovable misfits, the video is also a valentine to Los Angeles: Several iconic L.A. locales appear right alongside of the video’s cast, whose bravery is evidenced by their carefree dancing in very public places. “My favorite location [in the video] is Chinatown, I think,” Bareilles says. “That might be because of Summer Shapiro, who is the dancer featured in that segment. She is such a brilliant performer and that moment really sparkles for me.” As for her all time favorite spot in the city? “It’s really hard to choose, but one of my favorites places is Venice,” she says. “I have a house there, and I chose that part of the city because it spoke to me deeply. I love the collision of old and new, grit and gourmet. It’s strange and proud of itself for that—and I can relate.”

Get a load of L.A.’s starring role in the new video for “Brave,” below, and then use our handy dandy map to get your groove on around town.