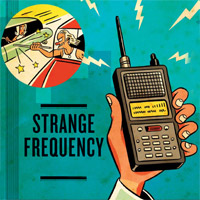 It’s been a long hot summer, and aside from the miracle of air conditioning, one of the only things keeping us sane is @LAScanner. After interviewing the king of the Los Angeles Twitter crime junkies, we pored over his feed and picked our 20 favorite Tweets. Of course, brilliance drips from his fingertips like morning dew off a blade of grass, so we recommend checking back on a daily basis for the latest in hilarity.

17. MACARTHUR PARK *Update: Fools chose to run, a folly begun. But the chase is short-lived as their feet failed to give. A footbail to jail 9:08 pm, Aug. 20

15. HOLLYWOOD: LAPD going to Sunset & Highland for a dude covered in blood w/a machete. Sounds like a Monday night in August. Or total bullshit. 9:59 pm, Aug. 13

5. BEVERLY HILLS: Lady won’t let her neighbor smoke a little grass in peace on his balcony. Keeps calling the cops. They come, leave, he tokes. 12:13 am, July 13

2. ECHO PARK: Tranny wearing all pink threw loveseat over a fence near Sunset & Alvarado. This call makes no sense at all. LAPD enrte. 11:24 pm, July 8

1. N. HOLLYWOOD: Sucks to be robbed of your pocket knife by a grown man on a red BMX bike, wielding a hammer. Happened behind a liquor store. 12:13 am, Aug. 17