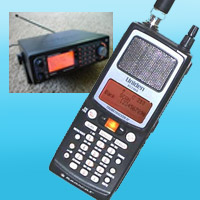 Hostage situations, wildfires, car crashes, and the occasional naked man threatening his roommate with an ironing board. Well before the phalanx of officers and local news stations arrives, even before the LAPD airship kicks up dust, Angelenos can learn startlingly precise details of local emergency calls. They only need to check Twitter, where scanner junkies who listen in on police and fire deparments relay all manner of crimes, great and small. Their timely updates have earned @Venice311, @WeHoDaily, and @SGVScanner sizable followings, but for pure amusement the undisputed king is @LAScanner. When he goes #ScannerOn, there’s no better window on the chaotic, tragic, funny, and outlandish spectacle that is life in Los Angeles.

With a laptop and his trusty Uniden BC296 by his side, LA Scanner, who we write about in our October issue, dashes off hilarious Tweets from behind a mask of anonymity. (Only three people in his life know about his online alter-ego, he says.) When we spoke on the phone, he wouldn’t reveal much about his personal life except to say that he is in his mid-30s, grew up in Los Angeles, lives in the Miracle Mile neighborhood, and works a “slightly irregular” office job that’s not in the entertainment industry. Otherwise, he was happy to talk about anything.

In his first extended interview, printed at length for the enjoyment of die-hard followers, LA Scanner answers questions about everything from the wackiest calls he has overheard to the finer points of scanning technique. (Geek out on that, radio scanner nerds.)

How long have you been doing the @LAScanner Twitter feed? What made you start doing it?
I think I started in the spring of 2011. I had been listening to scanners in various forms for about 25 years. I started around 1988, and I originally got into it because I wanted to listen to airplane traffic. I was an aspiring pilot at the time. I got a scanner that was designed to pick up airplane frequencies. It looked like a big old brick cell phone.

I was listening to airplanes fly over my house. At the time, LAPD was broadcasting emergency calls on this one frequency that I was randomly able to pick up. I got hooked. The stuff you hear on these scanners was fascinating. It was interesting, funny, sad. I hadn’t connected the dots until about a year and a half ago. For whatever reason I thought Tweeting these things would be interesting.

How has the feed evolved since then?
In its early days it was way more in the weeds. It wasn’t so general purpose. It was more like ‘what this specific truck is doing in this specific neighborhood.’ I found an audience pretty quickly and I realized there was an appetite to hear what was going on in various parts of L.A., and I was able to quickly move into doing more commentary while providing information.

Since that first scanner, how many have you gone through? Which model are you using now?
Four or five. I’ve probably had this one for at least six years. It’s a Uniden BC296. It was probably top of the line in 2003 or 2004. It’s relatively unremarkable. It looks sort of like a Walkie Talkie. The technology doesn’t change all that much, but with each successive model I was able to pick up more of what was being broadcast. Luckily for us in L.A., the systems that most of the police and fire agencies use aren’t that complicated.

How does it work when an emergency call comes in?
Los Angeles has two big dispatch centers, one in Van Nuys and one in downtown. If you call 911 you get routed to [one of them]. (Weirdly enough, West L.A. dispatch calls go to the Valley.) There are 21 LAPD stations in the city. Each has a dedicated frequency. The LAPD itself has over 100 frequencies including specialized ones for detectives, SWAT teams, and helicopters. There’s also the Hotshot Channel, which broadcasts every emergency police call in the city.

How often do you listen for LA Scanner?
It depends. I go through phases. For me, it’s like background noise.

So you have it on while you’re hanging out at home?
Yeah, absolutely. While I’m tidying up, cleaning, doing laundry, cooking, whatever. With LA Scanner there’s this demand. I feel more obligated to listen to it in the evenings. The other issue is I have to be near my computer. It’s hard to wander around. So I end up turning it on for a couple hours a night three or four nights a week if I’m around and feeling it. I’ve gone through phases where I won’t listen to it for weeks or months because I’m just not interested. The reason I got into this is because I like knowing what’s going on. Partly it’s a voyeuristic thing, but also you want to know why that fire engine just drove by or why that helicopter is overhead.

How long did it take you to learn “scanner language”?
It takes a good couple years. For me, the first couple years — this is before the Internet — I was spending a lot of time trying to get my hands on reference books. When the Internet came around it made everything easier. The codes you see in the movies — 10-4 and all that — the sheriff uses that but the LAPD and the LAFD use what they call “plain speak.”

I think your sense of humor is what makes your feed so fun.
There’s so much funny shit that just happens, whether it’s the guy last night who was threatening his roommate with an ironing board or the tranny running down Silver Lake naked at two in the morning throwing a pink couch over a fence. I literally couldn’t make it up.

Are there things you don’t Tweet?
There’s nothing funny about rape. There’s nothing funny about mass murder. I tend to never Tweet about domestic violence calls. But there are exceptions to every rule. If a wife is beating her husband over the head with a chicken, that’s funny — potentially. If someone gets shot 30 times with an assault rifle, that’s worth tweeting about because it’s a serious crime. If someone gets shot with a blowdart, that’s funny.

Unless it’s a fire or a car crash or something that everyone’s going to see, I will almost never Tweet the exact address. I’ll say, “the 1200 block of Third Street” or “the 500 block of Sunset Boulevard.” Partly because it’s a privacy issue. Partly because I don’t want somebody trying to roll over to that address to check out what could be a robbery or a shooting in progress. The short answer is: I just try to use my best judgment.

Are there things you don’t Tweet about because it might hinder police?
Yes and no. I don’t ever want to put a police officer or the public in danger, so I’m very careful. I never put the name of the hospital that anybody is taken to. If you’re the guy who did the shooting and you want to finish the job, it’s a good way to figure out where the guy just went. In general, I don’t need to censor it too much because for the biggest stuff, the news helicopters are overhead. I never listen to surveillance or detectives or undercover stuff. I don’t even have those frequencies programmed into my scanner.

It sounds like you have a sense of responsibility.
One of my goals is to always be credible. I want people to enjoy what I’m Tweeting and have a laugh, but I also want to make sure I’m not putting bad information out. People need to remember that this is real stuff that’s going on. It can be funny and it can be crazy, but at the end of the day these are real calls and real emergencies that affect people.

What sets you apart from other Twitter feeds?
I try to inject humor and wit and sarcasm. Mostly humor and wit. Less sarcasm.

Is there more pressure now that you have a following? People, myself included, were bereft when you went out of town.
That was a tactical error on my part, not properly announcing my departure. I was so busy I totally forgot to say: “I’m going off the grid for two weeks, everybody.” There were all these direct messages from people freaking out.

You have some notable fans, including Susan Orlean.
That’s definitely Twilight Zone territory, when you’re talking on Twitter to Susan Orlean. It’s undeniably cool. And it shows you the amazing egalitarianism of Twitter. I’m not sure if they are still followers but both the Osborne kids, Jack and Kelly, have followed and retweeted me at different times. Rob Delaney will once in a while retweet me. There’s also a whole group of folks who are expatriate Angelenos or who live outside L.A. They basically say they’re glad they don’t live here, but they like reading my Tweets.

Why do you remain anonymous?
This is about crime and public safety and scanning in L.A. Not having who I actually am out there helps that. It gives me more freedom to tweet things without people thinking, “Oh, of course. He Tweeted that because that’s who he is and that’s what he thinks.” I have a ton of followers who are hardcore right-wing conservative folks. I also have a ton of Occupy and left wing people who follow me. There are no flame wars. They don’t know who I am or how I think about anything.

What makes someone a good scanner?
The thing with scanning is that you’re only as good as how many channels you can listen to at once. The scanner works like a car radio, so you can hit a button and cycle through all of the frequencies you’ve programmed, and when there’s talking on one of the frequencies, it stops. Meanwhile, there’s probably 50 other people talking on 50 other frequencies but you won’t hear that. The trick, and this is what takes a lot of experience, is quickly deciding if what you’re hearing is important enough. If it isn’t, you keep scanning.