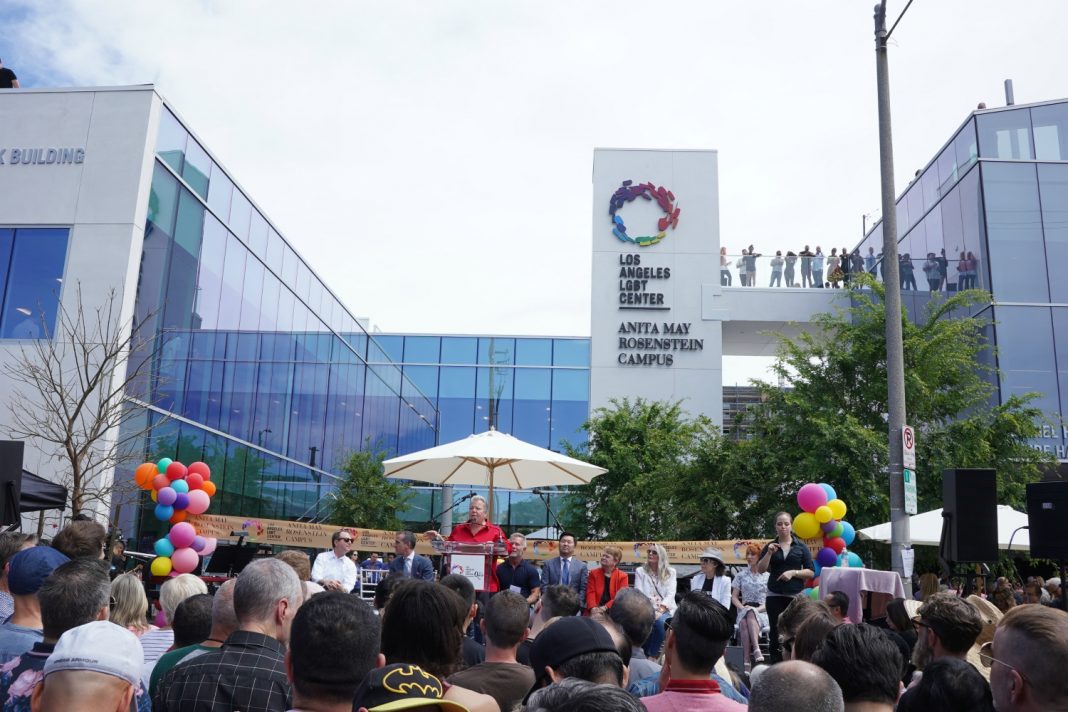 A coterie of celebrities, public officials, and high-powered donors attended a ribbon-cutting ceremony and block party for the Los Angeles LGBT Center’s new digs in Hollywood on Sunday.

The $141 million Anita May Rosenstein Campus is practically a miniature queer city, with 100 beds for homeless youth, a new senior center, and an academy. It will serve as the center’s flagship facility, while the current hub near Sunset and Highland will be transformed entirely into a health center. A second stage of campus construction, slated for completion in 2020, will include 99 units of affordable housing for seniors and 25 supportive housing apartments for young people.

The opening of the new campus shut down a full city block and brought thousands to the street for a live performance from the Trans Chorus of Los Angeles, a comedy set from Lily Tomlin, and rousing political speeches from the likes of Adam Schiff. (Visitors seemed to ignore the small group of protesters, near the rainbow-bedecked entrance, holding signs that read, “Jesus Tells the World Ends” and “Ask Me Why You Deserve Hell.” )

The building’s namesake, Rosenstein, is an heir to the May department stores and was introduced to the center by actress Judith Light, a former board member. She pledged $8 million for the building’s construction—the largest gift ever given to an LGBT organization by a living person. Total costs for the campus exceed $141 million.

Among the other big names that attended the opening were a veritable who’s who of L.A.’s political establishment, including L.A. County Supervisor Sheila Kuehl and mayor Eric Garcetti. (Lisa Vanderpump had been scheduled to attend but bowed out, per a spokesperson for the center.)

Speakers stressed the importance of a center that serves a broad spectrum of LGBT people, including vulnerable youth. “How many of you feel that your parents never really understood you?” Lily Tomlin asked the crowd. “And how many feel it would have been more awkward if they had?”

According to a 2012 study by the Williams Institute at UCLA, 40 percent of homeless youth identify as LGBT, and 46 percent ran away because of family rejection of their sexual orientation or gender identity. Thirty-two percent faced physical, emotional, or sexual abuse at home.

“This is an intergenerational campus where youth and seniors are going to live together, help each other, learn together,” said Lorri Jean, CEO of the LGBT Center. “There’s nothing like it.”

“It will bring love, it will bring hope to tens of thousands of people,” said Rosenstein. Schiff lauded the new campus for its work to create a “better, healthier, and more equal world.”

In addition to housing, the 180,000 square-foot campus includes a youth drop-in center and academy, a new senior community center, and space for a diverse range of programming.

Kuehl noted that the center was important because, although the homeless count went down by 5 percent this year, the number of homeless seniors went up. “And, as we know, the LGBTQIA population is always among the most vulnerable.”

“This campus will be a home for young people—many of whom are trying to get their lives back on track,” she continued. “Mentoring, job training, GED programs, case management, treatment services—that’s where your county money actually goes so that people can stay off the streets and hopefully get what they need.”

RELATED: For Trans Angelenos, a Job Fair for Gender-Diverse People Can Be More Than a Place to Find Work