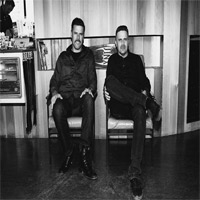 Movember—the growing tradition for men to sport a mustache during the month of November to raise awareness of prostate cancer—will soon be on the tip of everyone’s tongue—or lip rather. So we got the “dirt” on hirsute style from the man who helped start the movement. No matter if you’re “The After Eight” guy, an “Abrakadabra” gentleman, or “The Connoisseur” type (see a detailed style guide here) these words from Adam Garone, the Australian born CEO and co-founder of Movember, will surely inspire your individual “growth”.

In addition to raising awareness of prostate cancer, Movember is all about promoting the ethos of the modern gentleman, a man of chivalry and respect. How does this relate to growing a mustache?
It’s been a really interesting evolution over the years. Three years ago we came up with a campaign that centered around the modern gentleman, and we really defined what we thought being a modern gentleman was all about. It’s about bringing back chivalry and good manners and tied to this is the idea of having respect for your body and your health, because chances are there’s someone out there who wants to keep you around. The movement is about looking out for your friends and family, while at the same time taking care of and maintaining yourself.

What do you say to the guy who is hesitant to grow a mustache for relationship or work reasons, or to someone who has never grown facial hair before?
We get quite a few guys who won’t grow a mustache because they think of what their partner would think, or their boss, but the key to this is grooming. Some who haven’t done this before have the perception that they can just grow out their hair and be fine, but it actually does require some grooming. We are telling men to change their appearances, and for the first two weeks this is daunting: You’re not sure whether you can grow a mustache, what shade it’s going to be, and it’s a really interesting journey that guys go on. By week two you start to own it and be positive with it and your whole attitude sort of flips around it and how you look. That’s really what we’re trying to get across with our message, to change your attitude—especially towards health.

What I say to everyone is that there will be one conversation sparked by a mustache that will be really enlightening, and that whole month of growing that mustache will be worth it for that one conversation, no matter whom it’s with. Certainly each year in November I have that conversation. A couple of years ago it was a taxi driver.

This year’s campaign is called Movember and Sons. Why?
We came across this father and son barber, and that was the geneses of the idea and the name behind the campaign. When you think about it, ideally the father or the father figure passes knowledge down to the child, and there comes a pivot point in our lives where we can actually pass knowledge back up to our dads and men of that generation. Then it becomes about knowledge transfer. In our case it’s educating these men about the importance of their health. By virtue of growing a mustache you will explain yourself over and over again and by virtue of talking about Movember and men’s health, you effectively become a walking, talking billboard.

Why is Los Angeles such a relevant city for the movement?
With so many action sports brands located in California it just clicked. Angelenos were really the first ones to jump on board, especially in the creative agencies. In the entertainment world there are so many guys behind the scenes that participate. Plus, the Prostate Cancer Foundation in the U.S. happens to be based in Santa Monica, on 4th Street and Arizona, and it’s our key partner in North America. And they grow the best mustaches in Los Angeles.

What do you say to the people who dismiss Movember as just some hipster thing?
It is a little bit of a hipster thing, but some of the hipsters that rock a mustache all year round get a little bit annoyed with Movember, too. We find that it is expanding every year. You can’t walk around L.A. at any time of year and not see a gentleman wearing a mustache. Words of wisdom though: Girlfriends are definitely the gatekeepers to growing one. It’s so important to get them on board.

What kind of mustache will you be rocking this year, and what celebrity has the best mustache in your opinion?
I find myself with a mustache the vast majority of the time. When I don’t have one people go, “Hey where’s the mustache?” We call it our hairy ribbon, so we’ve got to wear it. But this year I think I’m going with “The Connoisseur.” In terms of the best mustache, I grew up admiring the actor Errol Flynn, he had a great ‘stache. Kevin Connolly also [participated in] Movember last year and grew an awesome mustache.

For tips on growing a mustache and how you can contribute click here.