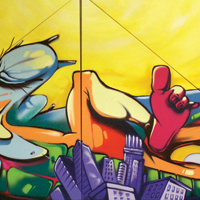 First off, the spray-painted letters and stenciled scrawls all over Los Angeles aren’t street art. They’re graffiti art—a semantic distinction often blurred by the most passionate fans of this largely illegal form of expression but key to understanding the value of L.A’.s urban landscape. “Street art is still seen as art created in the studio rather than installed on the streets,” says artist Man One, “while most graffiti art is painted on location, with codes of conduct.” In other words, graffiti art is a visual dialogue, with hundreds of artists’ tags and icons as unique as dialects.

This month artists fluent in the form, such as Chaz Bojórquez, Dave Kawano, Max Neutra, and Patrick Martinez, are showcasing original works on canvas, wood, sculpture, and mixed media at the downtown gallery Crewest as part of its tenth anniversary celebration. “I’ve titled the show Mission Accomplished,” says One, who is also the gallery’s creative director, “because our ambition to make graffiti art a viable and respected art form has come to fruition.” A potentially profitable one, too: Graffiti and street art buyers—from casual fans, who spot artists on art blogs or post their work via photo-sharing apps like Instagram, to more serious collectors—will pay a few hundred to a few hundred thousand dollars for original work once the artists have established themselves on the street, which is still a risky endeavor; graffiti is a felony or a misdemeanor in California. “Some artists are riding the fame wave,” says One. “Others are getting their homes raided by police and treated like criminals. That’s the irony in all this.”