Home Philanthropy When Disaster Strikes, an Elite Team of L.A. Firefighters Travels All Over... 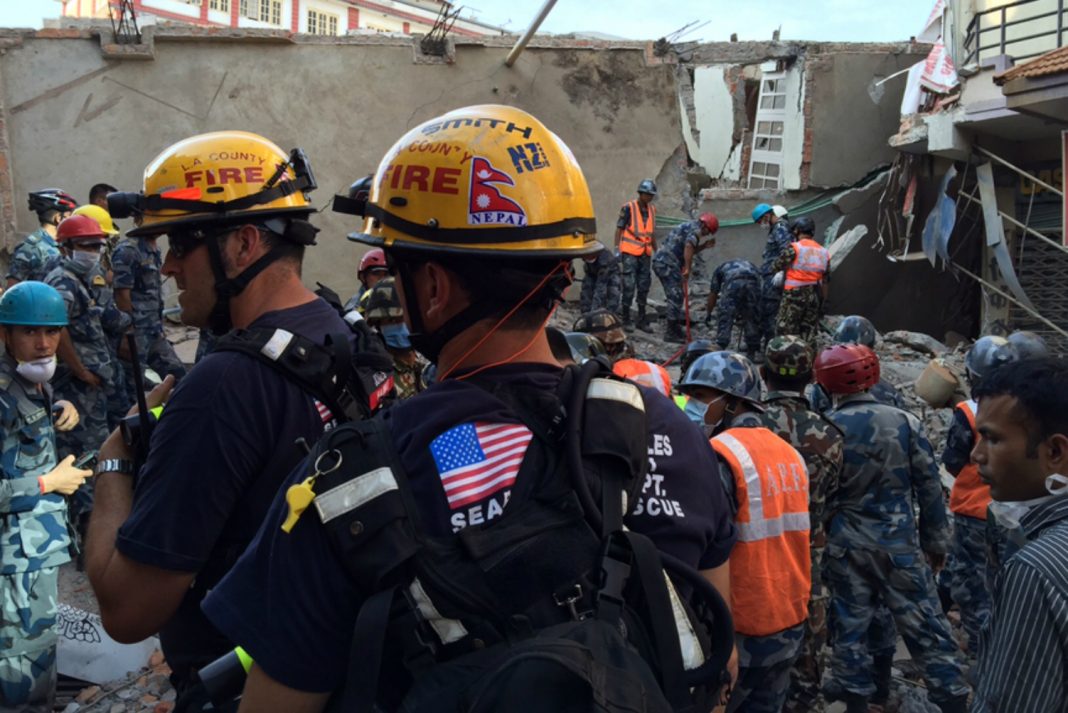 When a 7.8 magnitude earthquake rocked Nepal on April 25, 2015, the country sent out an urgent call for humanitarian aid and rescue assistance. The landlocked nation was overwhelmed at the outset by the so-called Gorkha earthquake, which resulted in catastrophic destruction and thousands of casualties.

Like a Swiss army knife, the 230 men and women who make up the USAR Task Force come with an array of skills. The unit is known alternately as California Task Force 2 (CA-TF2) for domestic missions directed by the Federal Emergency Management Agency (FEMA) or USA-2 for international disasters directed by the Office of U.S. Foreign Disaster Assistance.

CA-TF2 and USA-2 have deployed to some of the most horrific disasters in modern history: the 1995 Oklahoma City bombing, the terrorist attacks on 9/11, Hurricane Katrina in New Orleans in 2005, the 2010 Haiti earthquake, and the 2011 earthquake and tsunami in Japan.

“Sometimes we got to get dirty with what we do, but we’re there for a reason,” says battalion chief Robert Harris, who has spent more than 20 years on the USAR task force. “We’ve got a mission and a purpose, and we do what got to do to get as many people out alive as possible.”

“Some of the things you see are pretty ugly,” he said.

The physical and psychological toll endured by task force members from deployments to disasters is unfathomable. Unsurprisingly, some members have left the team. Because deployments can last from a few days to upwards of a month, often with short notice, these sometimes undefined absences from home add to the strain and anxiety on their spouses and loved ones.

Recently, CA-TF2 and USA-2 have been deployed to perform search and rescues in Nepal, swiftwater rescues in Houston, Texas, and air and water operations in Puerto Rico.

Captain Dave Norman was among the 57 members of USA-2 to deploy to Nepal after the earthquake. He was part of the coordinated rescue of a Nepalese teenager named Pemba Tamang, along with Nepalese armed forces and another elite team of firefighters from Fairfax, Virginia.

“Someone thought they had heard screaming [from underneath the rubble], so we stopped the track excavator,” he recalls. “Our guys got some hits with the canines which were then confirmed with our technical search cameras.”

The environment where rescuers were operating while trying to save Tamang was “horrendously dangerous,” Norman says. Collapsed portions of buildings surrounded the area while aftershocks, which had been sporadic since the initial quake on April 25, presented an even more precarious situation.

By the first full week of May, USA-2’s search and rescue mission was drawing down. They began demobilizing and preparing to go home, but their plans abruptly changed on May 12 when a violent, 7.3 magnitude earthquake struck near the base of Mount Everest.

“After the earthquake hit, we immediately went operational,” Norman says.

With assistance from the U.S. military, squads from USA-2 were delivered to villages by helicopters to conduct search and rescue operations, mass casualty preparation, and medical assessment. Working for four hours straight using just hand tools, a squad from USA-2 was able to rescue a woman who was trapped beneath the rubble of a collapsed four-story building in the nearby village of Singati.

Task force members are trained to specialize in multiple types of rescues. With the exception of members who are not active duty L.A. County firefighters, everyone on the team is swift water, hazmat, and confined-space trained.

And their rescue efforts aren’t limited to other countries. When seasonal rains fall across L.A. County, swift water rescues have been performed in the L.A. River and flood control channels. The experience they get at home—in addition to year-round training—keeps them nimble for trips abroad.

After Hurricane Harvey made landfall in Texas as a Category 4 storm on August 25, 2017, CA-TF2 swift water specialists were notified by FEMA to immediately deploy to Houston.

Hurricane Harvey was unlike anything Texans had seen or experienced in history. Catastrophic amounts of rain shattered records across multiple counties in Texas. Residential neighborhoods and roadways were underwater, rivers and lakes overflowed, and levees were breached.

“One of our assignments was to support the Houston Fire Department who over the last 36 hours had received so many 911 calls, they were not able to check or respond to all of them because the system, locally, was overwhelmed,” recalls Captain David Stephens, who deployed as part of a 15-man component of CA-TF2 specializing in swift water and flood rescue.

Launching their rescue boats from neighborhood cul-de-sacs and tree-lined streets in the community of Kingwood in northeast Houston, CA-TF2 methodically went house to house, neighborhood by neighborhood, to check on residents, follow up on 911 calls, and, if needed, rescue people from their flooded homes.

“We were going into areas that had already been cleared by the Cajun Navy [a volunteer group of civilian rescuers from Louisiana] to make sure nothing was missed,” Stephens says. CA-TF2 ended up rescuing several residents including an elderly couple who were trapped in their home.

In situations like that, the dangers of the deployment aren’t exclusive to just the environment above water, Stephens explains. What lurks in the water can be just as threatening.

“Whenever you have flooding, whatever is hazardous to your health like pesticides, oils, animal feces, all of that stuff gets washed into the flood waters,” he says. “Anytime you’re operating in and around those waters you’re exposed to a lot of things, some of which are obvious and some of which you might not be aware of.”

Barely a month had passed since CA-TF2 deployed to Houston when FEMA requested the task force’s assistance to an even more grim disaster: Hurricane Maria, which hit Puerto Rico in September of 2017.

“Once the wind came through the island, it was pretty much over,” battalion chief Harris recalls of the apocalyptic devastation he and 26 other members of CA-TF2 witnessed upon arriving on the island.

Once Hurricane Maria struck the U.S. territory, destruction crippled the island. Unlike in Houston, where the task force was assigned a certain territory to operate in, in Puerto Rico they were sent all over the island. “We were literally chasing 911 calls,” Harris recalls.

Aided by vehicles provided by FEMA and helicopters piloted by the U.S. Coast Guard and private contractors, Harris and the team were able to mobilize quickly to respond to calls for help. “We broke down into squads and were doing welfare checks all over the island,” Harris says. “We were doing debris removal and clearing streets so that we could get to certain areas of the island that were totally cut off.”

Throughout the two-week deployment, CA-TF2 saw its mission evolve from being rescue-driven to organizational, as they assisted local cities and municipalities in assessing their critical infrastructure and emergency operation center needs.

What may be most remarkable about CA-TF2 and USA-2 is that members volunteer to serve. Back home in L.A., flags are displayed at the Pacoima headquarters to represent all the places they’ve traveled: New Zealand, Mexico City, New Orleans, Texas, and Puerto Rico. They remind task force members where they’ve made contributions—and that another deployment could be just around the corner.