Home Technology A Game-Changing Electric Mustang and More to See at the L.A. Auto... 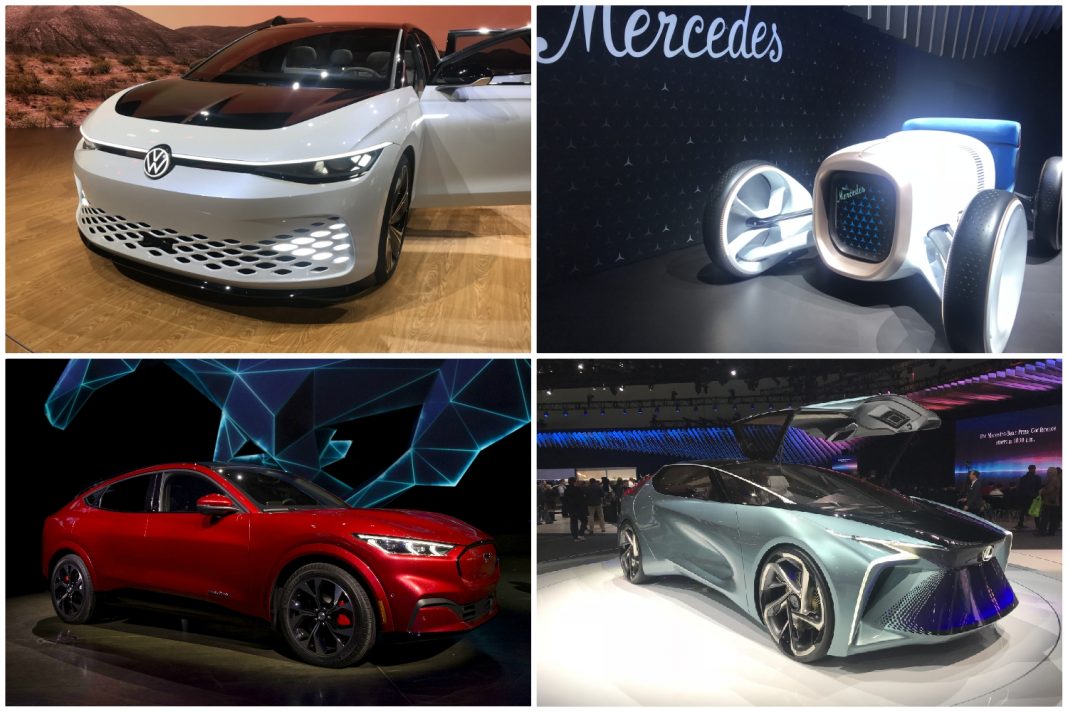 The 2019 Los Angeles Auto Show opens to the public today at the L.A. Convention Center, as slumping sales, shifting technologies, and the coming of age of a generation diffident about car ownership are causing yet another legacy industry to undergo an existential crisis.

Earlier this year Ford—which introduced mass-manufactured automobiles with the Model T—announced it was largely exiting the car business save for still hot-selling pickups and SUVs; GM laid off thousands, closed factories, and was subject to the longest strike against the company in nearly 50 years. Under pressure to reduce carbon emissions, every automaker is wrestling with converting to electric vehicles without compelling evidence that a mass audience for EVs actually exists.

During press previews for the show earlier this week, auto executives and analysts painted a picture of near-apocalyptic change upending the industry.

Porsche has earmarked $6 billion through 2023 to develop pure electric and hybrid models like its stunning new Taycan, the marque’s first all-electric model, with range and power comparable to the Tesla Model S (the nominally entry-level Taycan 4S, at $103,000, bows at the show).

German automakers Porsche, BMW, and Mercedes-Benz in particular were blindsided when Tesla seized the technological and status high-ground in 2012 with the Model S and subsequent Model X SUV and Model 3 sedan and have spent the intervening years furiously retrenching. Now, Porsche is about to find out whether its rabidly devoted customers will embrace electric cars as readily as they did the Cayenne and Macan SUVs, which now account for more than half of the brand’s sales in North America. Klaus Zellmer, president and CEO of Porsche North America, pledged that 60 percent of the company’s vehicles “will come with a plug” by 2025.

Porsche marketing executive Detlev von Platen obliquely credited Tesla’s influence in remarks while unveiling of the Taycan 4S at the press preview. “California is a role model for all us, the birthplace of modern electromobility,” he said. “Right here, this trend started ten years ago; right here, people started to think differently and changed the way of thinking all over the world…we see the changes we need to be making, we are embracing the power of electric drive.”

Eager to put to rest the rigged emissions scandal which derived partially from the company’s desire to sustain its investment in diesel-engine technology, Volkswagen—Porsche’s corporate parent and the world’s largest automaker—introduced a slate of pure electric concept vehicles that it plans to bring to the mass market and pledged more in a pre-show press conference.

“We’ve made this massive commitment to the biggest transformation in the industry to finally bring EVs to scale,” said Scott Keogh, CEO of Volkswagen Group of America, adding in a subtle dig at Tesla’s (and presumably Porsche’s) price points and demographic, that VW would make EVs “for millions, not just the millionaires.” Keogh said VW will invest close $37 billion in e-mobility by 2024 and produce nearly 1 million electric cars by 2025, with a goal of delivering 22 million electric vehicles by 2030. VW’s latest iteration of its I.D. electric concept series, the snazzy I.D. Space Vizzion, set to hit these shores in 2022, gets the star treatment at the show.

Domestic automakers are also betting on electric. As part of a sweeping reorganization that eliminated nearly all of its traditional sedans in favor of still brisk-selling trucks, SUVs, and crossovers, on Monday Ford unveiled the Mustang Mach-E, an all-electric compact crossover based vaguely on the styling of the iconic pony car introduced at the 1964 World’s Fair. The Mach-E will deliver an EPA estimated range of around 300 miles and in its GT configuration leap to 60 mph in about three seconds—and is aimed squarely at eating the lunch of the pricier Tesla Model X and the smaller, forthcoming Model Y, with which it will directly compete. Taking a page from Tesla’s playbook, Ford is accepting $500 reservations for the Mach-E (MSRP: $59,000) for delivery in 2021. Check out the production model at Ford’s space at the show—this is a vehicle that could be a game-changer on the level of its storied namesake.

With pure electric vehicles still representing an infinitesimal slice of the market, there’s plenty of brawny petrol-powered iron to be sampled at the show. Chevrolet’s eighth generation Corvette Stingray and Coupe radically re-imagines the namesake of Prince’s cherished hit as a stunning mid-engined monster that finally brings the ‘Vette into styling parity with European sports- and hypercars—and for the comparative pittance of $59,995, starting MSRP. MotorTrend named the revamped Corvette its 2020 Car of the Year.

Get ready to see a lot of white—the Vizzion at the VW exhibit is painted pure white; as is the new ‘Vette spinning serenely on the turntable at Chevy’s booth. Infiniti, meanwhile, goes all in on the trend: the entirety of its lineup at the show, including the gorgeous QS Inspiration electric concept, along with the walls, furnishings and carpets at its booth, are uniformly white as snow. (Custodians stand by in the wings to blot stains). What gives? Style consultants say the trend toward white vehicles began as a backlash to ubiquity of silver cars that dominated the ‘aughts; white finally supplanted silver in 2013 as the most popular car color, influenced by the original iPod and iPhone’s clean white faces and stainless steel accents. On upscale cars, white’s impracticality subtly implies the owner has the means to keep them looking presentable; white also suggests eco-sustainability and clean air, making it popular for zero-emissions vehicles.

Finally, flying cars may finally be a thing: Porsche’s Zellmer confirmed the company is partnering with Boeing on a flying car—or “flying object,” as he prefers. “We have a prototype and are building the full-blown flying object as we speak,” Zeller said.” As for its prospects? “Let’s see,” he said.

RELATED: Driverless Cars Are Set to Dominate L.A. Roads, but No One Knows if That’s a Good Thing