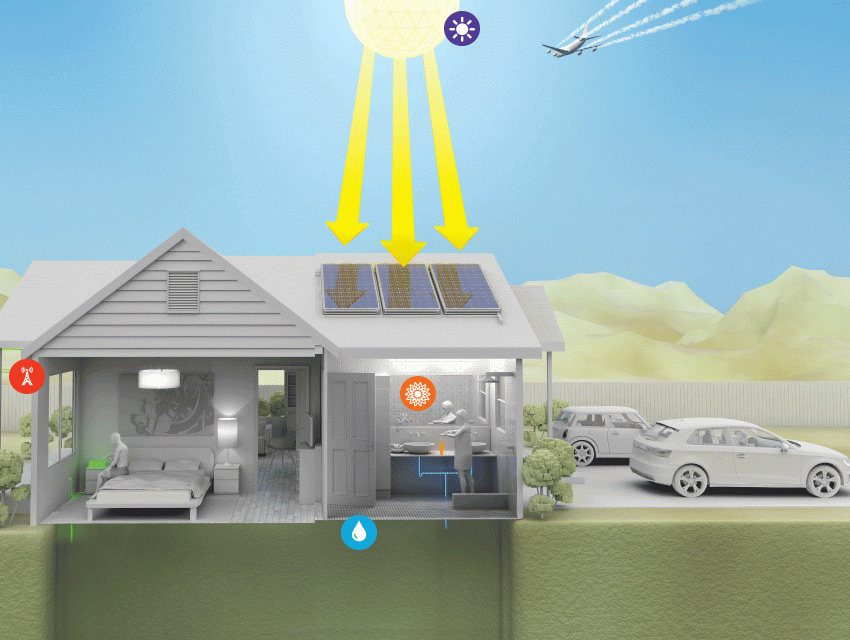 Air Quality
Smog is a go-to gripe, but our air is far better than it used to be. The EPA’s Air Quality Index (AQI) uses a scale of 0 to 500, based on the concentration of five types of pollutants: carbon monoxide, nitrogen dioxide, sulfur dioxide, ground-level ozone, and particulate matter. An AQI of 125 or less is regarded as generally healthy. Surprise: The average L.A. County AQI in 2013 was 74, which is moderate (Beijing’s AQI is 646). Problem is, according to the American Lung Association, we have the third-highest year-round particle pollution of any city worldwide and the highest ozone levels of any major metropolitan area (though that number has been decreasing steadily). Without this layer of gas protecting the Earth’s atmosphere, however, we are more susceptible to hazardous ultraviolet rays.

Radio
The technology may seem quaint, but that radio at your bedside is part of a sophisticated communications system, starting with mountaintop “antenna farms” that maximize signal transmission. (Pasadena-based public radio station KPCC, for instance, has a large antenna atop Mount Wilson.) When you select a station, your radio receives the signal, separates out the specific wave frequency of the station, and amplifies that signal so that you can enjoy Morning Edition before hitting the snooze button (again).

Electricity
The Los Angeles Department of Water and Power is the largest municipal utility in the country, serving 3.8 million Southland inhabitants. Just 25 percent of the LADWP’s power is generated in the L.A. basin; the remaining 75 percent originates from outside the area, including coal-fired power plants in Utah and hydroelectric plants along the Columbia River in the Pacific Northwest.

Plumbing
In the 101 years since William Mulholland supervised construction of the 223-mile-long L.A. Aqueduct, the region’s population has exploded, necessitating additional sources for keeping lawns green and glasses full, despite a drought. Today water is purchased from the Metropolitan Water District and transported through the California and Colorado River aqueducts. Other sources include captured stormwater and groundwater from aquifers.

Solar Energy
The science behind most solar panels is photovoltaic technology. Sunlight hits the silicon cells on the panels (placed on the south side of a roof), creating an energy current that flows to an inverter, which converts DC to AC. The price of installation starts at approximately $17,000; energy bill savings average $143 a month.

Sunscreen: A Moment to Deflect
L.A. is exposed to 3,000 hours of sunshine a year, so protecting your skin is a must. Most sunscreens contain filters (like octyl methoxycinnamate) and reflectors (including titanium dioxide or zinc oxide) to guard against ultraviolet (UVA and UVB) radiation. Obviously sunscreen with a higher sun protection factor (SPF) is more effective than one with a lower value, but after SPF 30, the difference is minimal. The recommended amount for the entire body is four ounces—enough to fill about two shot glasses.

Sky Writing
Contrails (a portmanteau of condensation and trail ) are formed when the heated air produced by a jet’s engine reacts with the cold, low-pressure air present at high altitudes. Conspiracy theorists popularized the term “chemtrails,” claiming that the government uses these fluffy streaks as a cover to release harmful chemicals (It doesn’t).