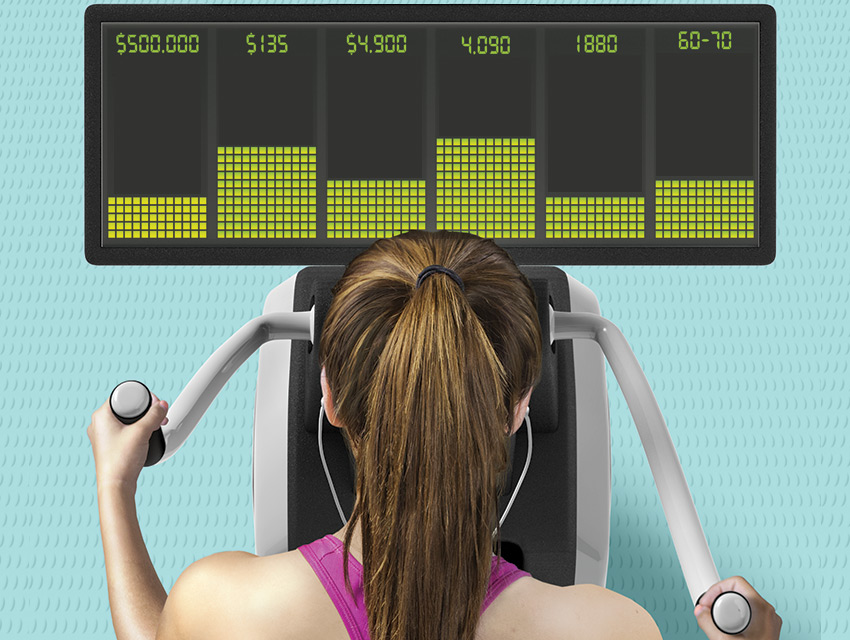 $165.68: Combined price (plus tax) for one pair of cropped yoga pants and one tank top from Lululemon Athletica.

$500,000: Approximate cost of outfitting a gym with all of the necessary equipment. A single treadmill can cost $6,000—or more than $11,000—depending on the model. A large gym might include 100-plus machines.

$135: Price that high-end gyms can charge for one personal training session. But trainers aren’t rolling in dough: Their cut is often less than half that.

4,090:Yelp listings (as of August 15) for L.A. gyms. The top-rated facility (with five stars) is Crossfit Ganbatte in Glassell Park.

1880: Year that L.A.’s first private gym, the Los Angeles Athletic Club, was established. Members (read: men) paid a $5 initiation fee plus one buck a month to use the trapeze, flying rings, a long horse, and dumbbells.

60-70: Minutes required to burn around 500 calories on an elliptical training machine. That’s about how long it takes to burn off the same amount of calories in the smoothie you’re about to drink.

180: Ideal number of beats per minute (BPM) in a song for a runner to maintain optimal stride. (Try “Hey Ya!” by Outkast.)