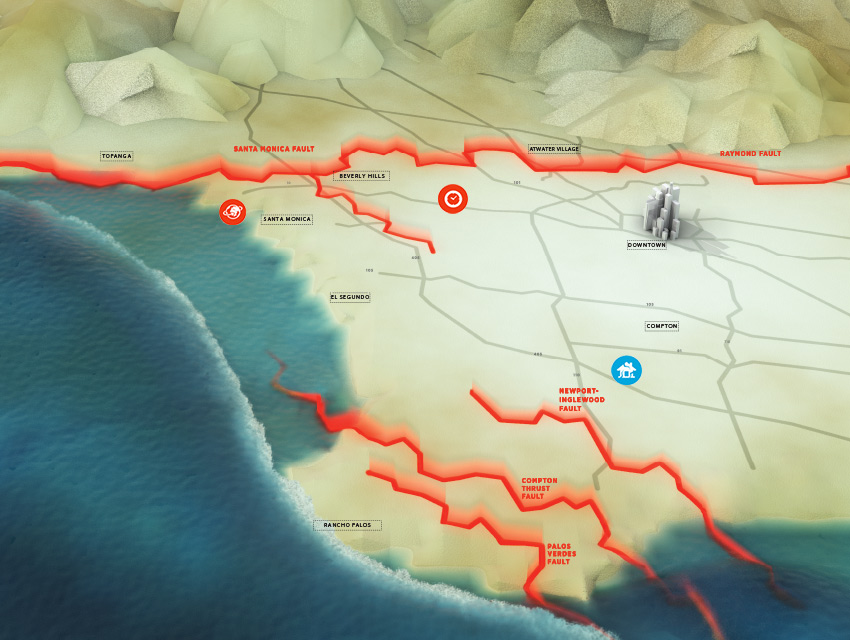 A Matter of Scale
Though unpredictable, earthquakes aren’t geographically random. Deep within the Earth lie specific seismic zones, which periodically manifest volatile tectonic plate activity. The West Coast happens to be located on top of one of the most active areas. Southern California experiences about 10,000 earthquakes per year, but only a few exceed a magnitude of 5.0 on the Richter scale, which measures the amount of shaking amplitude and energy released. While there is no reliable method for predicting an earthquake, scientists and engineers are devising warning systems (see “Embrace the Shake,” below), and several smartphone apps (we like QuakeFeed) keep track of temblors all over the globe on a real-time map.

Between the Lines
Don’t let the red jagged lines on this map fool you. Faults aren’t like continuous tendons; they’re more like a series of fractures, with lines representing their zones. The larger the fault, the bigger the earthquake. L.A. has 21 major faults. The largest is the San Andreas, which lies 40 miles outside the city. The zone spans a surface area of 800 miles, with some faults running as deep as 10. Major movement along the San Andreas occurs, on average, every 100 to 150 years; the most recent activity was 157 years ago. We’re overdue. What to Do
“Drop, cover, and hold” remains the most effective personal response to a quake. If you’re indoors, drop to the floor, get under a desk or table, tuck into a ball, and grab onto something. If there’s no desk, stand in a corner (not in a door frame). When outside, seek an open area away from trees, buildings, and power lines. On the road, pull over and stay inside your car.

Embrace the Shake
Lucy Jones, famed CalTech seismologist and earthquake adviser to the mayor’s office, on why Angelenos need to suck it up and face the fear: “The reality is that everybody in L.A. is within five miles of a potential earthquake. If you want to live here, you need to get over it. What most people don’t know is how to manage them properly. People should be scared. We aren’t prepared for the threat to our economy. We have bad buildings and bad water infrastructure.

We are looking at financial devastation waiting around the corner. I’m talking about the whole community, because making money depends on your having a job. I think it’s best to consider our resilience as well as our preparedness. An American is far more likely to die in a tornado. Over the last 100 years, the average annual number of deaths from tornadoes is more like 100 or 200, versus earthquakes, which is about 3.”

“We have a prototype warning system working through the government-sponsored Urban Area Security Initiative. We’ll soon be able to send out warnings, making use of those seconds between the initial rupture and an actual earthquake hitting L.A.”

Point Break
Large-scale undersea quakes displace huge quantities of ocean water, creating tsunamis with waves that can reach more than 100 feet high. With our fault zones mostly inland, even major tremors aren’t likely to destroy our beaches. But a serious quake near the Alaskan peninsula could have a ripple effect that would hit our shores in four hours.

Slow Going
For the past 3 million years, the San Andreas fault zone has “grown” roughly two inches per year—at about the same rate as a human fingernail.

Sneak Peaks
The hills and mountains around us formed over many millennia. The repeated uplifting and submergence of tectonic plates by the Raymond Fault eventually led to these masses of sedimentary rock.

Code Red
Since 1984, cities in California have been required to retrofit brick buildings. According to the Los Angeles Times, 70 percent of 26,000 buildings across the state have been retrofitted or demolished.

Welcome to San Frangeles
If certain fault lines continue to move as predicted, in about 15 million years L.A. and San Francisco will be next to each other.

The Median American Rent Jumped 17 Percent in One Year

Crime’s Up — Everyone into the Panic Room!