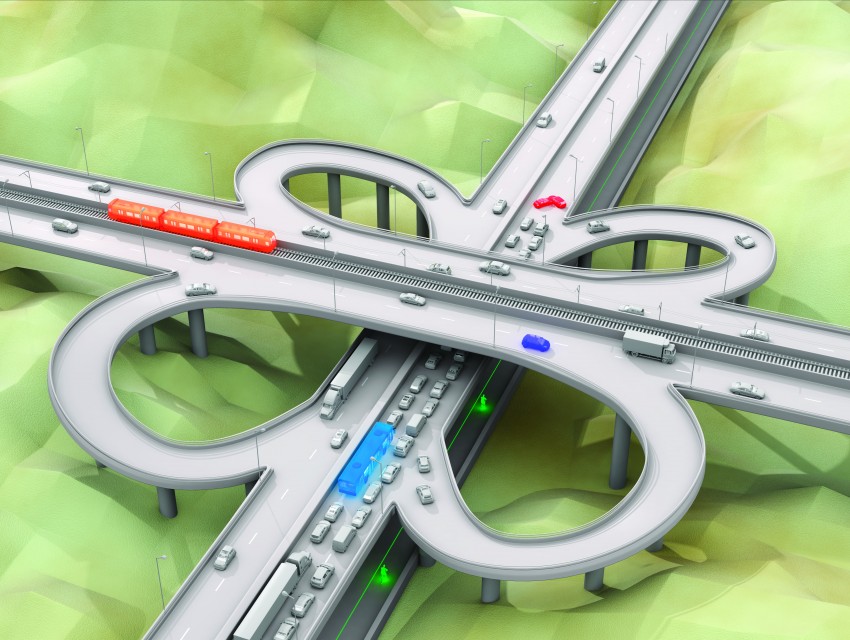 Sigalert: L.A.’s Omen of Freeway Hell
There are annoying fender benders, and then there are true disasters—pileups, oil spills, bomb threats—destined to clog roads for at least 30 minutes. This is where SigAlerts come in: Drivers rely on them to steer clear of trouble (and stay sane). The real-time traffic reports were invented in the 1950s by Loyd Sigmon, an executive at radio station KMPC-AM, who used a short-wave receiver and a tape recorder to transform LAPD accident dispatches into immediate on-air bulletins. In the 21st century anyone can access Sig-Alerts through the California Highway Patrol’s Web site.

Public Transportation
The Los Angeles County Metropolitan Transportation Authority is the nation’s third-largest transit system; its Metro buses cover 1,433 square miles. In July approximately 28,700,000 boardings were reported across the entire Metro fleet of 2,228 buses. Two common vehicles are 45-foot-long buses, with 46 seats, and 60-foot biarticulated models, with 57. Bus lines are divided by color into three categories, based on the frequency of stops. The orange “California Poppy” buses are local and make the most stops, the “Rapid Red” make limited stops, and the “Business Blue” are cross-freeway express lines.

A Waze to Go
For anyone trying to avoid gridlock, Waze seems like magic, but the traffic app has a rigorous, globally used system. It aggregates crowd-sourced information, such as accidents and police traps, that’s shared by thousands of users via smartphone and provides turn-by-turn directions for the fastest alternative routes. Much like Wikipedia, Waze relies on a team of volunteers, including Jesse Mayof Long Beach (left), who makes sure the data is accurate. The app is so successful, Google bought the company for $1 billion in 2013.

Clearing Hazards
Stalled vehicles, blown tires, and dogs running amok on the freeway are common road hazards, but what makes the difference between nuisance and crisis is the intervention of the California Highway Patrol. When the CHP receives a call about an obstruction and the object is small enough, an officer is dispatched to remove it.

To organize a “traffic break,” another officer in a cruiser slows down freeway lanes one or two exits ahead of the hazard by turning on the back lights and weaving carefully across lanes, starting in one and gradually widening the zigzag until all lanes are crossed and all vehicles behind the cruiser have stopped. The officer parks in the middle of the freeway and gets out of the car to retrieve the offending object or to move it to the side of the freeway. Once the road is cleared, the officer leaves the scene, and traffic resumes. Caltrans performs most roadside cleanups and typically comes by with a dump truck within a week to pick up anything left behind. Let’s hope it’s not your Beemer.

The Mark of a Perfect Latte

Your morning coffee likely comes to you as art: Many baristas craft a flower shape, called a rosetta, on top of the foam. Turns out it’s more than mere decoration—it’s a quality seal performed in three steps