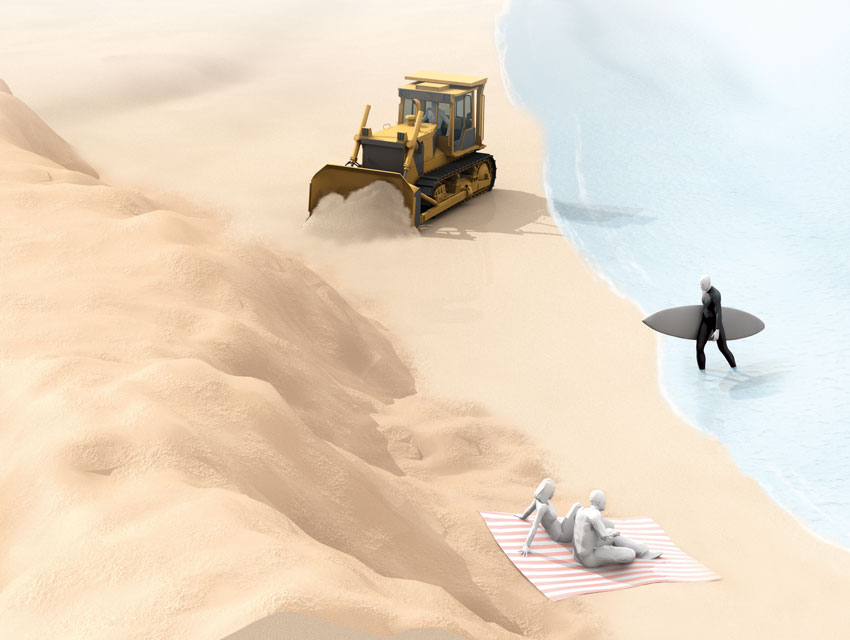 The Grunion
Beginning in March, grunion do their “run” onto the shore at night to lay eggs and fertilize them. Officials try to work around the spawning schedule of the silvery fish. The construction and deconstruction of berms may interfere with the burying of grunion eggs and their subsequent hatching.

The Placement
A berm is built as close as possible to the area it is intended to protect, which varies from beach to beach. Venice Beach has a berm that’s 50 to 60 yards from the Washington Boulevard parking lot.

The Mound
The Department of Beaches and Harbors brings in bulldozers to push dry sand from the ocean side of the beach into mounds that are 10 to 12 feet high; some mounds are as long as 416 yards. No foreign materials are used. It takes approximately three to five days to construct one mound and three weeks to complete the full set along the coastline.

The Surface
Broad and flattened by the weather, berms are so densely packed, they’re sturdy enough to support several tons, including the weight of a lifeguard vehicle that may need to cross one in an emergency.

The Upkeep
Beach officials periodically check on their man-made sand dunes, doing restoration work if they’re damaged by the elements or, for that matter, beachgoers. Build a berm, and someone’s going to want to sled down it.

The Shape
The side of the berm that faces the area being protected is practically vertical in order to provide the most support for the side that gets pummeled by waves, which is sloped.

The Ecosystem
According to state law, a biologist must be on-site during berm construction to ensure that the habitat of the snowy plover, an endangered species of bird that lives on the beach, hasn’t been disturbed.