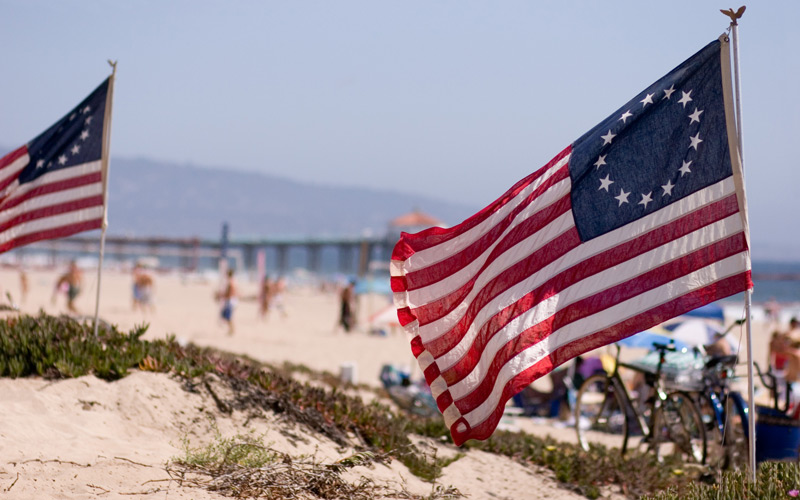 I had a very patriotic upbringing. My father was in the military, and so my family moved constantly, from city to city and state to state, experiencing different expressions of Americanism along the way. Each stop on our veritable tour of the U.S. introduced me to a new kind of local pride: from Augusta to Washington, D.C. and Manhattan to Kansas City, I learned that America is a place to treasure, honor, and boast about.

Then I moved to L.A.

To be frank, it felt like a great escape, a chance to be a little more low-key about my love of country. After all, Fourth of July weekends in Los Angeles are about drinking white wine and trying to spot illegal fireworks. Conversations at annual holiday BBQs center around past, present, and future vacations. America doesn’t really come up.

Lately, I’ve been wondering why that is. Why doesn’t L.A. feel like it has a strong patriotic culture?

Here’s what I’ve decided: L.A. patriotism isn’t non-existent. It’s internalized. Hear me out. We’re a sprawled melting pot that represents the country’s great, diverse future. We’re socially progressive, and politically complicated and full of cultural contradictions. We’re our own little version of America, and we think about the city as a nation unto itself. Sometimes we grapple with issues before the rest of the country—like we did with same-sex marriage and minimum wage—and it’s indisputable that our local tastemakers influence culture.

So is Los Angeles, as a place, particularly patriotic? On the surface, it’s not, no—but that’s only because we show our pride of country in a less traditional, more contemporary way. In place of talking about America the way people in other places do, we stay busy trying to make it better and leading by example from the West Coast. That’s a type of American pride I can get down with. I hope Americans who live elsewhere look left and see the value in it, too.