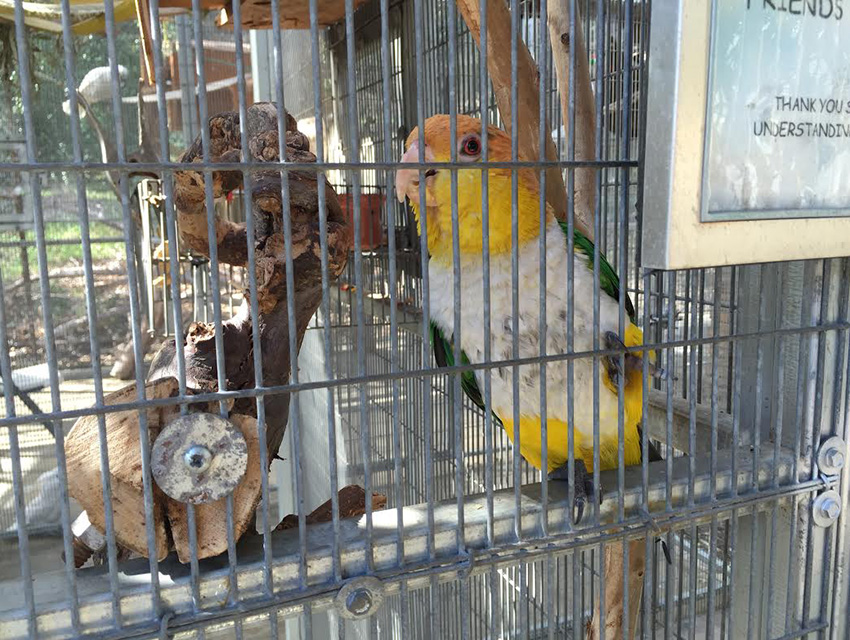 At first blush, Serenity Park seems like a misnomer for a parrot sanctuary located just yards from one of the busiest interstate highways in Southern California. But the little-known enclosure, which sits on an eighth of an acre tucked behind a baseball field on the VA campus in Westwood, is one of those rare L.A. discoveries: a world unto itself.

Birds caw, chirp—and, yes, say hello—but it’s impossible to hear other noise, like traffic whizzing up and down the nearby 405, or to sense the city’s urban pulse from inside the grassless park. Founded in 2005 by Dr. Lorin Lindner, a clinical psychologist and preventative health specialist, the sanctuary has the simple but noble mission to heal veterans by rescuing parrots.

The sanctuary takes in birds in need of care—either because they’ve suffered an injury, experienced abuse, or can no longer be tended to by elder owners—and then welcomes veterans dealing with issues ranging from substance abuse to PTSD to nurse the parrots back to health. It should come as no surprise, perhaps, that the veterans experience healing, too.

Matthew Simmons, the park’s director of operations, says physical labor and animal interaction (often administered in combination with medical services provided by the VA) helps veterans coping with military-related traumas find renewed purpose and a way to reconnect with the world outside of combat. Simmons is a war veteran himself. He served in Operation Desert Storm, in the Persian Gulf, and Operation Desert Shield, in Iraq. He experienced Serenity Park for the first time in 2006.

“When I came to Serenity Park, there were two birds, Maggie and Ruby,” he says. “Maggie and Ruby were attacked by a raccoon. They were wild parrots from Telegraph Hill. Maggie’s wing was mutilated, so was her chest. And so was Ruby. For four weeks I held them down and put medication on them and force-fed them, and they would bite at me and be angry. After four weeks, they started to physically heal. After four months, they started to emotionally heal. Then I would go into the enclosure and they would land on my shoulder and say, ‘Matt, I love you. Matt, hold me.’ And they would lie in my hands and I would tell them everything was going to be OK.”

“I was this veteran who carried this big bag of guilt. I’ve seen things I can’t unsee and I’ve done things that I can’t undo. And just because you do it for God or Country doesn’t make it better, doesn’t help you sleep at night. But the birds taught me that you can let go. Because Maggie and Ruby let go when for the first month I was the worst thing they ever met, because I would hold them down. They learned that it was all for their own good. After that, I dove back into therapy with the idea that it was all for my own good. Living that [experience] with a sentient being made me more open to sharing with my doctors.”

Nearly a decade later, Simmons has seen 48 other veterans move through the animal therapy program he now helps oversee. He says 43 of them have remained “sober, employed, and connected.” Some have gone on to apply the bird-handling skills they picked up at Serenity Park by working with veterinarians. At any given time, four paid veterans, three veteran volunteers, and seven to 10 citizen volunteers keep the park in order. Some additional 1,500 veterans have stopped by for a support group session or to visit with the parrots.

And while critics have in recent months called for VA oversight and reform, Simmons says the Westwood campus should be commended for Serenity Park, which is the only therapy sanctuary of its kind.

Singer-songwriter Laura Bryna, who has long supported veterans’ causes, agrees. Bryna says she was blown away when she visited Serenity Park for the first time. Now she’s leading an $80,000 fund-raising campaign to expand the park’s presence with an additional aviary that can hold up to 36 more parrots and provide paid work to 30 additional vets. Construction is set to begin in the coming weeks and should be completed by Christmas. “It makes me cry every time I think about it,” says Bryna of the Serenity Park. “It’s one of the greatest places because it’s not one of those rescue programs focused on just the human being, where a dog helps the human. It’s the bird and the veteran. If the bird is getting better, the veteran thinks, I can get better too. Why can’t we both get better together?”

The park, which is open to the general public on Saturdays, exists mostly as a way station for people and animals in pain, but it’s been a site of transformation, too. That’s why Bryna choked up on a recent walk around the grounds. Her voice shook, just a little, as she spoke. “Isn’t it the happiest place?”