The nail-biting intensity of Election Day is poised to endure longer in Los Angeles as the razor-thin margins separating candidates Rick Caruso and Rep. Karen Bass might make it difficult to determine a clear L.A. Mayor-elect for several more days. According to the latest available election returns, Bass and Caruso are locked in a virtual 50-50 deadlock and the candidates traded leads on Tuesday night.

The next time Angelenos will see news on the vote count will be Friday, and the most up-to-date data available from the L.A. County Registrar-Recorder/County Clerk shows Caruso leading Bass by 12,282 votes, as of 3:30 a.m. Wednesday. This translates to 51.25% of the vote for Caruso compared to 48.75% for Bass. Still, both candidates are projecting confidence in their respective runs.

On Wednesday, Bass tweeted of her readiness to answer the call of L.A. voters, expressing confidence in the numbers so far.

We feel great about the numbers so far. As we await the next rounds of updates, know we're already rolling up our sleeves to launch urgent solutions for homelessness, crime and affordability.

The people of L.A. sent a clear message last night.

I am ready to answer their call. pic.twitter.com/V9wdkegmwB

Caruso, meanwhile, said that the election is a reflection of “those left behind and unheard,” then similarly noting his own readiness to bring about change for L.A.

This election has always been about those left behind and unheard. I hear you and change will happen. pic.twitter.com/53HZ9OIiYo

On Wednesday, the county registrar’s office announced that there were roughly 1 million ballots still to be counted, though the office did not specify how many of those come from the city. Sarah Leonard Sheahan, Bass’ communications director, expressed enduring confidence Wednesday.

“We expect to see support for our campaign build even more as further reports are released, just like we did in June,” Sheahan said in a statement, referring to the mayoral primary, where Bass initially trailed before eventually surpassing Caruso. 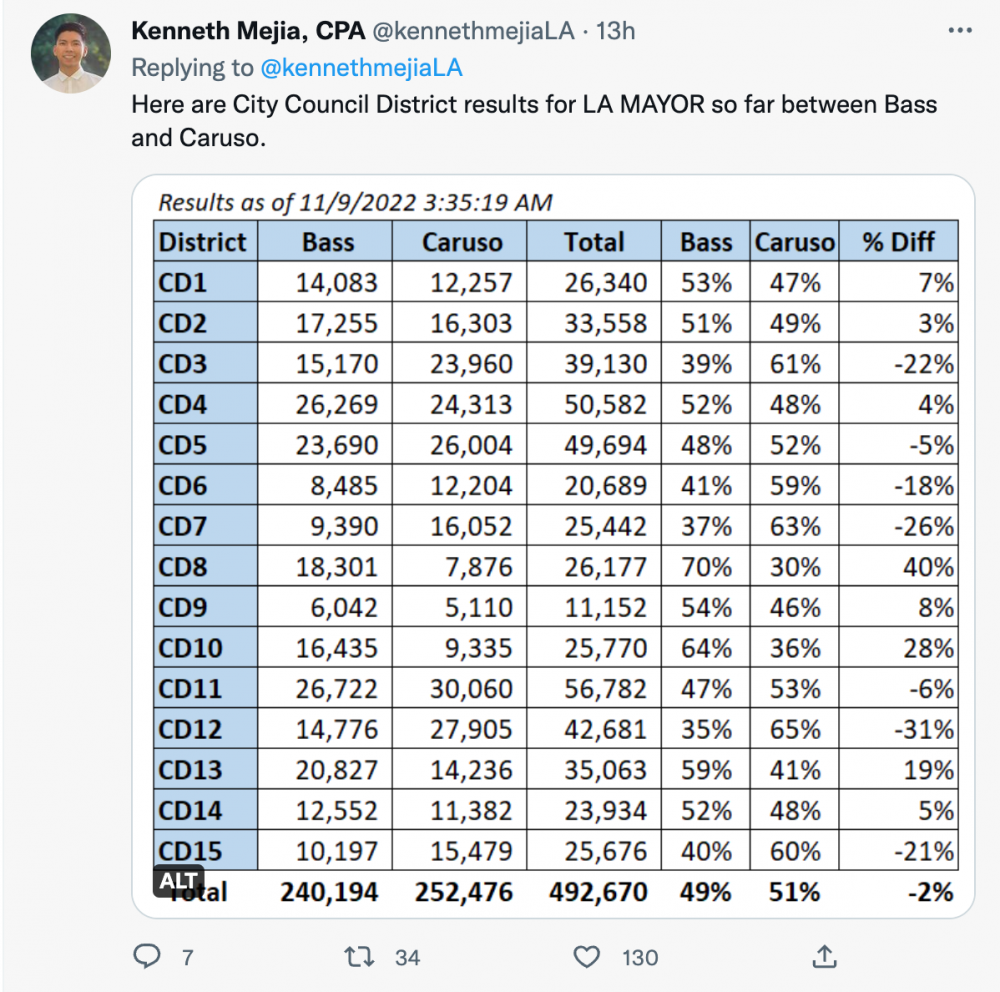 In Tuesday night speeches at their respective election night parties, both Caruso and Bass acknowledged the race may be too close to call for a while. The real estate developer, walking out at his election night party Tuesday at The Grove to the song “Safe And Sound” by Capital Cities, said while he didn’t know the outcome yet but they were “starting out strong.”

In between chants of “Rick, Rick, Rick,” Caruso thanked his supporters for taking “a chance on an unproven candidate who has never run for office.” He spoke about his grandparents immigrating to Boyle Heights, where he cast his ballot on Tuesday to remind himself of his family’s humble roots. Caruso said he wanted to provide the chance for everybody to achieve the American Dream.

In her speech at the Los Angeles County Democratic Party’s election night party at the Hollywood Palladium, Bass said it was “going to be a long night” and that the results might take a few days, before leading the crowd in a chant of “We will win.”

“We’re going to build a new Los Angeles, and when we win, we have to begin again,” Bass said. “We want a City Hall that’s not just a City Hall for the powerful, not just a City Hall for the wealthy—but a City Hall that is for everyone so that we can have the quality of life that I know that we deserve.” Citing Los Angeles’ position at a crossroads, Bass called the fraught election a “fight for the soul of our city.” She went on to say, “And I know the soul of our city is based in a set of values that is reflected in the Democratic Party.” As she finished her speech, Aretha Franklin’s “Respect” played over the speakers like a battle cry.

Bass, a six-term member of Congress, is seeking to become the first woman and only the second Black person to lead Los Angeles. Caruso, a billionaire with celebrity endorsements from the likes of Snoop Dogg, Katy Perry and Kim Kardashian, is looking to win a campaign that’s on track to spend over $100 million—much of it from the magnate’s own fortune.

Bass held a comfortable lead in the polls just a month ago, but recent surveys ahead of Election Day showed that Caruso had closed the gap considerably. Bass led Caruso 45% to 41% in a UC Berkeley Institute of Governmental Studies poll conducted from Oct. 25-31—co-sponsored by the Los Angeles Times—with the gap within the margin of error. A Southern California News Group poll conducted by J. Wallin Opinion Research from Oct. 15-17 found a 3-point lead for Caruso, which was also within the margin of error.

An earlier version of the UC Berkeley IGS Poll in early October showed Bass with a 15-point advantage among likely voters. Experts told City News Service that, while the electorate in Los Angeles favors Bass, the race could hinge on other factors.

“The conventional metrics tell me that Karen Bass is going to win,” said Fernando Guerra, professor of political science at Loyola Marymount University. “However, there are two things: The general discontent with the electorate, and $100 million being spent by Caruso—and that makes a difference, obviously.”

Whoever wins the election will inherit leadership of a city grappling with a scandal that has embroiled City Hall for the past month after three council members and a top county labor official took part in a leaked conversation in October 2021 that included racist comments and attempts to manipulate redistricting.

“We’ve had a really volatile month in L.A. County, and Rick Caruso has made a late push here that clearly has made, at least in the polling, a significant difference,” said Mindy Romero, director of USC’s Center for Inclusive Democracy.

Caruso has connected the scandal to claims that the city’s political system is broken—exacerbating issues such as homelessness and crime. He painted himself as the candidate of change, blaming a failure of leadership for the City Hall scandal.

“People are spending more time protecting themselves and protecting their jobs than working for the residents of the city,” Caruso said during the final mayoral debate on Oct. 11. “This is why we have crime out of control.”

Bass said at the debate that she would make sure Los Angeles rejects “the politics of divide and conquer.” Bass has sought to frame her opponent’s campaign as one driven solely by his own wallet. In an interview with City News Service in October, she said Caruso “represents the worst of our political discourse.”

“He shows the worst of what can happen when you have somebody who has unlimited resources, and then you have someone who is raising money and abiding by all the rules,” Bass said. “He has no rules. He has just writes checks.”

Caruso countered that by pulling from his personal funds and not taking money from special interest groups, he would not be swayed by lobbyists and have the city’s best interests at heart. Bass has also criticized Caruso for switching political parties. Caruso was a Republican until 2019 and donated to anti-abortion politicians, allowing Bass to contrast herself as a “lifelong, pro-choice Democrat” in a city that leans heavily Democratic.

Caruso said at a debate in September that he has always been socially liberal, and that he left the Republican Party in 2019 because it didn’t reflect his values—noting his support for Gov. Gavin Newsom and former Gov. Jerry Brown.

Caruso, in perhaps an acknowledgment of most major Democrats endorsing Bass, responded: “It doesn’t seem to be accepting me.”

Both candidates have acknowledged the gravity of the homelessness crisis in Los Angeles but differed on how to approach it. The latest point-in-time homeless count released this month showed a 1.7% increase in the number of unhoused people in Los Angeles since 2020, bringing the total to 41,980.

Caruso said the premise of his plan to address homelessness would be to get people into shelters, noting his goal to build 30,000 new shelter beds in his first year in office.

“We’ve got to meet people where they are,” Caruso said.

Bass said that, while getting people off the streets is important, “shelters are not the answer.”

As the two’s barbs now transform into a play of who can project the most confidence heading into the final ballot counts, experts have cautioned people not to read too much into initial results from Tuesday’s voting. After all, millions of vote-by-mail ballots have yet to be tallied. Close races lead to delayed calls, and this one might not be determined until later this week.

The Strange Days of the Karen Bass Transition Period

Why L.A.’s Next Mayor Won the Election Is Obvious—She’s Karen Bass