Home Dining For Nearly 30 Years, This Koreatown KFC Has Been a Misunderstood L.A....

There’s a giant chicken at the corner of Western and Oakwood avenues. Some people think it looks like a bucket, the standard receptacle for fried chicken. But to me, it’s always been a chicken, its beak pointing northeast, its feathers pointing to the intersection, and its comb stamped with the disembodied head of Colonel Sanders.

The infamous two-story KFC (technically located in East Hollywood) has repeatedly been named one of the ugliest buildings in Los Angeles, but it also has a fascinating architectural pedigree. Built between 1989 and 1990, it was commissioned by KFC franchisee Jack Wilkee, who wanted to “challenge the notion that all KFC franchises should have the same standard design of fake mansard roofs (and) outsize Colonel Sanders bucket,” he told the L.A. Times.

A fan of modern art and architecture, Wilke enlisted Grinstein/Daniels Inc. Founded by architect and art publisher Elyse Grinstein and Frank Gehry protégé Jeffrey Daniels, the firm had already designed artist David Hockney’s Hollywood Hills home and several of the Chaya family of Asian fusion restaurants. Initially, the firm was reluctant. According to Daniels, Wilke approached him and asked, “How do you feel about doing a chicken store?” Daniels admits, “At first I thought this might not be the right thing.” 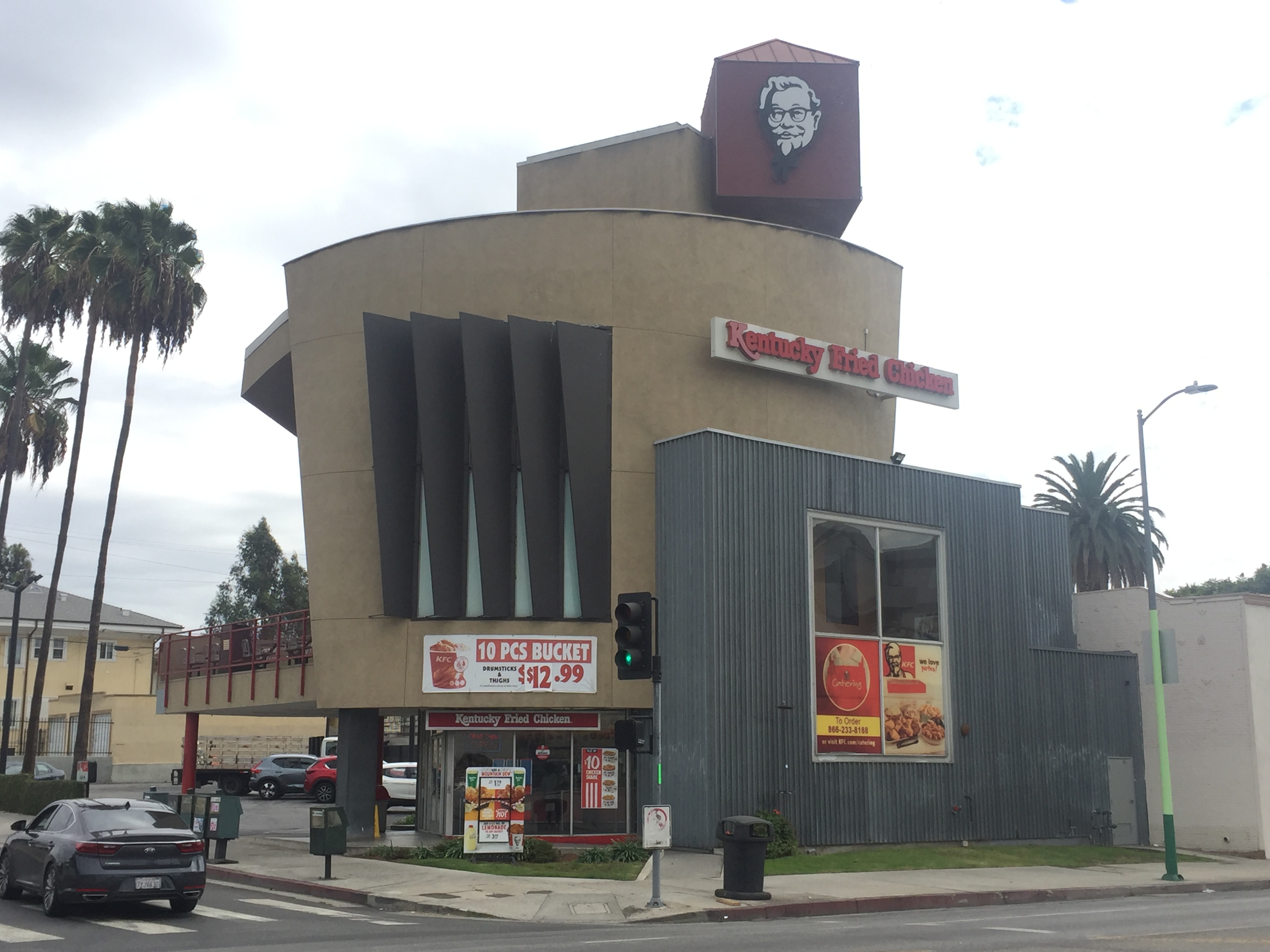 However, a specific namecheck changed the duo’s minds. “He asked me if I had ever heard of the Googie restaurant that John Lautner had been involved with. The minute he said that, I knew this was someone who might be really cool to work with,” said Daniels. Lautner’s long-gone Googies coffee shop in West Hollywood featured wild geometric shapes, as well as playful colors and fonts and a bold use of neon. The term Googie has since come to define mid-century architecture that features those elements. Although, the final building was more Gehry influenced, Googie touches can be seen in the beak and comb of the “chicken.”

When designing the KFC, Daniels wanted to make a “very structurally dynamic” building. While most fast food restaurants are surrounded by a parking lot, the KFC stands proudly at the corner with the parking hidden behind it. This recalls another L.A. architectural innovation; John and Donald Parkinson designed the art deco Bullocks Wilshire with a rear parking so the building and its wares could stand out more. Daniels says the KFC was designed similarly, calling attention to itself as part of the fabric of the city. The two-story KFC certainly catches the eye with its size and constructivist design. In a way, it interacts with the intersection, as you can stand outside and watch through a large window as people climb the stairs to the dining area on the second floor or sit on the building’s jutting balcony and take in the view of the intersection and Hollywood Hills.

Amazingly, despite Daniels’ intent to create a dynamic eye-catching building, he never had a chicken theme in mind. “It’s been called a bucket and a chicken, but this wasn’t a self-conscious thing,” says Daniels. The intent was to create a constructivist building, but it’s been interpreted as a modernist take on programmatic architecture. There was a time when programmatic architecture, a kind of novelty architecture in which a building was shaped like what the business sold or was called, like the hat-shaped Brown Derby restaurant or the armada of boat shaped buildings around town, was everywhere in L.A. It’s no surprise people assume this fancy chicken shack is part of that genre.

If you’re still not a fan of the structure, look on the bright side: it could have been more ostentatious. According to Daniels, Wilke frequently asked the same question throughout the design process: “Jeff, do you think we’re pushing it far enough?”

RELATED: This Fried Chicken Delivery Service Is New, but Its L.A.-Native Chef Is Legendary