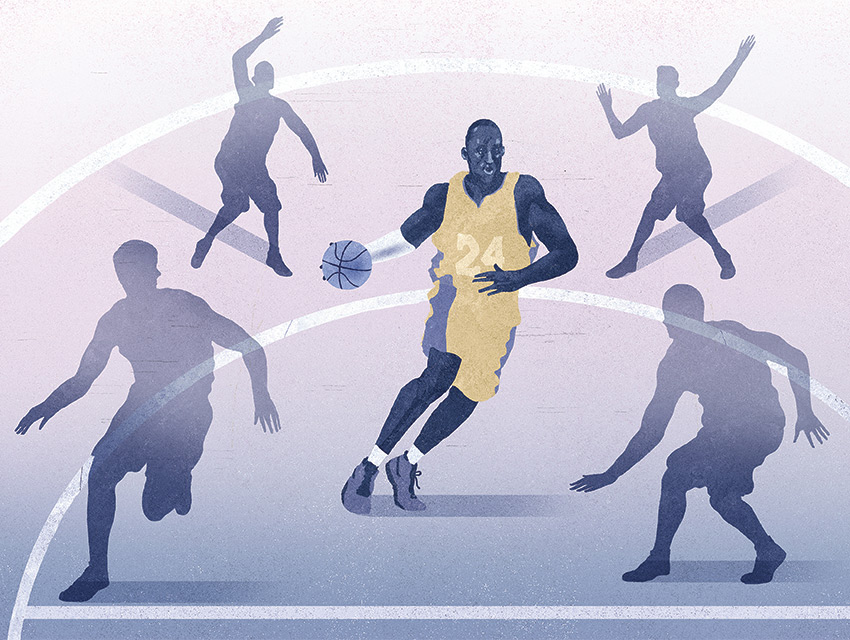 I keep having this vision of Kobe. He is on the court, running, teammates surrounding him. The crowd is lively; the cameras scan the front row of loyal celebrities, the ones still going to games during this disastrous season. Everything is vibrant and noisy: big bodies pounding up and down the floor as the ball is dribbled and passed. Suddenly the action stops. The lights dim, the spectators grow quiet, the players come to a halt. There at one end is 36-year-old Kobe Bryant, a bright beam on him. He is shooting again and again, retrieving the ball and firing from different spots on the court. He keeps on, like the kid in front of a driveway hoop. The other players have vanished. There is no one else around.

The Kobe Show is ending much as it began, with all eyes on the superlative, trash-talking superstar. His contract is up in 2016, and it is doubtful he will go on after that, doubtful, too, that the Lakers will be major contenders next season, no matter how gifted their draft picks. So what can we finally say about the aging wunderkind who came to the NBA out of high school and never played anywhere but L.A.? That he was a checkered hero who dazzled us and made us crazy at the same time, a man who brought us championships and probably cost us some, driving other players away from the Lakers with his intensity and mouthy arrogance. He has often felt like a soloist in an ensemble, right from the get-go when he refused to pass the ball in his first All-Star game back in 1998. That’s how he is finishing up, with the longtimers gone, the new crew not fully engaged. So it’s the Kobe Bryant swan song: a man taking shot after shot—from here, there, everywhere, trying to catch the all-time leading scorers, surpassing Michael Jordan but short of Kareem Abdul-Jabbar, at the top of the list with 38,387 points. With no chance of a championship ring this time, that’s all that’s left to do.

Maybe I am going soft, but there is something touching in this scenario—a ball hog who was never viewed as a team player getting what he asked for. It’s a lonesome existence, regardless of whether you helped bring it on yourself. Yet I find myself rethinking Kobe’s behavior, specifically his much-lamented squabble with Shaquille O’Neal. They had won three world titles in a row and could have nabbed more had they managed to get along. Shaq got the better of the story. He was the beefy, lovable clown who couldn’t make free throws, while his companion in victory was seen as icy, manipulative, angry. Then Shaq went off to the Miami Heat and a few years later won a championship in his new home. Looking back, I wonder if many of us didn’t misread the tempestuous narrative.

Even as he has exhausted us Angelenos, we are going to miss Kobe Bryant, and not only his athletic feats but the amount of space he has taken up in our heads. He appears to have at least one more season with us and we with him. Maybe we should try to embrace that prospect more, show him our loyalty, attend the games, not let those seats go empty, honor the spectacle that is Kobe Bryant despite his franchise having landed on the rocks.

Sure, he moves hard and sometimes mean through the world, so competitive that he—by his own admission—tries to beat his young daughters at board games. You can see how Shaq’s inability or unwillingness to master those foul shots drove Kobe mad at the deepest, cellular level. Would we have wanted him to sit on his ferocious resentment so the dynasty could continue? No doubt. But that’s not who Kobe is. He couldn’t do it, not for the team’s sake, not for the city’s sake, not for his own sake. That’s the most arresting part, the self-inflicted wound.

We have watched the defiant dance of his ego for the nearly two decades he has been with the team. A friend of mine, a sportswriter who covered this era, says she thinks Kobe has been misperceived, that he is not an egomaniac always pushing his own agenda but a person who cannot tolerate laziness in any form. Underneath his seeming showboating is someone who cares profoundly, not just about winning but about being the best he can be at every single turn, although it may alienate his teammates and fans. He is simply built that way, she says, noting that he has not mellowed over the years. That’s certainly the way it feels. He is in there fighting for every point, and there is something admirable about that. No coasting. Not ever. Not for Kobe.

In a lifetime of Laker watching, I don’t remember another player who has so riled our nerves. He’s no Magic Johnson, who enchanted us during his competitive years and again in his retirement as he took on the roles of entrepreneur and philanthropist. There was some innuendo-laced speculation after he announced his HIV diagnosis, but anyway, the city extended him goodwill. We held our breath. He made a comeback, both as a player and then briefly as a Laker coach—and it was always like having a bit of the sunshine back. In that sense he is the anti-Kobe, whose occasional grin seems to force its way through the control-freak layers of his psyche in a winning blast of warmth. It’s like seeing Tiger Woods actually smile. The expression catches you off guard.

It’s ironic that as the Lakers flounder, the other franchise in town is soaring. The Clippers continue on their unexpected roll after surviving the downfall of Donald Sterling. They have been gracefully shepherded by Doc Rivers, arguably the heir apparent to Phil Jackson. Yet I don’t hear much chatter about them. People still want to focus on the Lakers—and that’s in no small part due to Kobe, the carryover from their long period of triumph.

Of course Kobe’s legacy is also tangled up with that incident in Colorado in 2003 when he was accused of sexual assault. The charges were dropped, and the civil suit was settled out of court. But the accusation further complicated reactions to him, especially among women, some of whom wrote him off for good at that point as another entitled athlete/bully. It was then that Kobe started calling himself “the Black Mamba,” a kind of gang-style moniker, a protective armor he put around his damaged reputation. Ironically he grew up in white suburbia and its equivalent in Italy, where his father, a professional basketball player, moved the family when Kobe was six. He never struggled like others who came to the sport as an escape from poverty. It appears that the trash-talking and the swagger represent an assumption of a street-tough identity by a multilingual guy who takes his daughters to museums around the world. You sense a hunger, an acquisitiveness that isn’t solely about stuff. He wants to better himself, on and off the court. This is not a man who is going to ease up in retirement and play golf. His next act promises to be as intense as the one that is coming to a close.

Meanwhile we watch him solidify his place among the basketball greats. People say he is obsessed with Michael Jordan, a man he reveres but has also hoped to best. He passed him in December on the all-time scoring list, but Jordan has that sixth championship ring that will most likely elude Kobe, who is so close with five. Jordan’s per-game numbers—points, rebounds, assists, and steals—are still higher than Kobe’s. MJ seems destined to go down as the best ever, leaving Kobe one step behind, which is not the way he wanted to end up.

Kobe bristles when asked about retirement, as if to say, Don’t you guys get it? I am here playing my guts out. We can only hope he leaves the court in one piece—that he doesn’t have to quit due to injuries and limp away. That would be an unhappy outcome. Better for him to pull a Derek Jeter, be applauded when he plays his final quarters. Though he won’t leave quite the way Jeter did, with everyone lauding the veteran Yankee and talking about his grace and class. The postmortems on Kobe’s career are going to be much more complex as we all try to assess the roller-coaster ride he has taken us on.