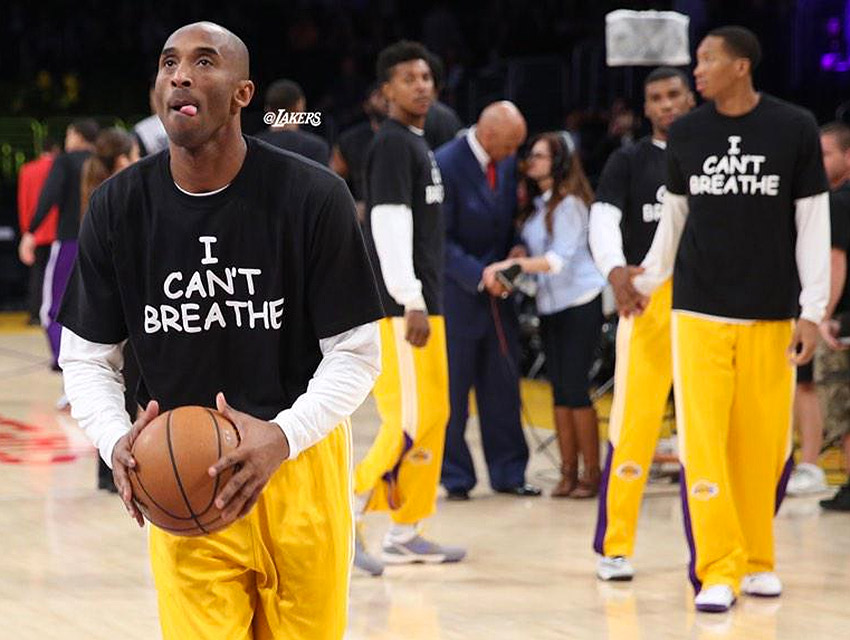 Kobe Bryant and nearly all of the Lakers have joined other athletes across America—Derrick Rose, LeBron James, Kevin Garnett—in protesting the death of Eric Garner by wearing black shirts printed with the words “I Can’t Breathe.” The Lakers wore the shirts on the court during pre-game warmups Tuesday night in a game against the Sacramento Kings.

Garner died on July 17 after being placed in a chokehold by New York City police officer Daniel Palanteo during Garner’s arrest for selling loose cigarettes. In a video of the incident captured by a bystander, Garner can be heard gasping the words “I can’t breathe.” In a second video, Garner is shown lying unconscious on the concrete for more than seven minutes before any attempt is made to save his life. On December 3, a Staten Island grand jury opted not to indict Palanteo in Garner’s death, despite the fact that a medical examiner ruled the death a homicide due to the chokehold (a move which is banned by the NYPD).

The Lakers’s demonstration comes on the heels of several St. Louis Rams players walking onto the field at the start of a game against the Oakland Raiders with their hands up in a gesture of surrender. The motion imitates the “Hands Up, Don’t Shoot” tag line born out of protests in the death of Ferguson teen Michael Brown; after the fact the move was condemned in a statement made by the St. Louis Police Officers Association. So far, it seems the Lakers have avoided any chastisement for the “I Can’t Breathe” shirts: According to ESPNLA, coach Bryan Scott stood behind his team saying, “That’s their choice, and whatever they choose, from my standpoint as a coach, I’m going to support them, but that’s their choice.” And though players are required to wear Adidas attire on the court, the NBA will not fine the Lakers nor any of the aforementioned players in this instance. “I respect Derrick Rose and all of our players for voicing their personal views on important issues, but my preference would be for players to abide by our on-court attire rules,” NBA commissioner Adam Silver said Monday.

After Tuesday’s game, Bryant spoke frankly to the Associated Press about the Lakers’ show of support for Garner’s family. “I think the beauty of our country lies in its democracy,” he said. “I think if we ever lose the courage to be able to speak up for the things that we believe in, I think we really lose the value that our country stands for…I think it would be a serious disservice to limit this to a race issue. It’s a justice issue.”