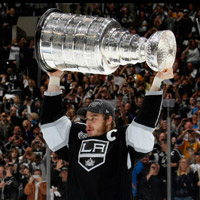 After a disappointing two-game delay, domination came early Monday night, as the Los Angeles Kings scored three unanswered goals in the first period against the New Jersey Devils. Setting the tone early on, the Kings were merciless in their rally to claim the franchise’s first Stanley Cup—and did so with a 6-1 victory in game six of the NHL Finals. Not only does the title mark a first for the Kings, but the championship run is only the third time a team with more defeats than wins in the regular season has won the Cup. It was a night of records: Dustin Brown, who scored the team’s first goal, became the second American-born captain to accept the Cup for an NHL team, and goalie Jonathan Quick, who was awarded the Conn Smythe Trophy for most valuable player of the postseason, became the second American in a row to win that prestigious trophy. Many spectators have called the Kings’ playoff run one of the most dominant of all time—and though the L.A. team didn’t sweep the Finals, they quashed the Devils in a game 6 that Angelenos will never  forget. Here’s to next season, Kings.