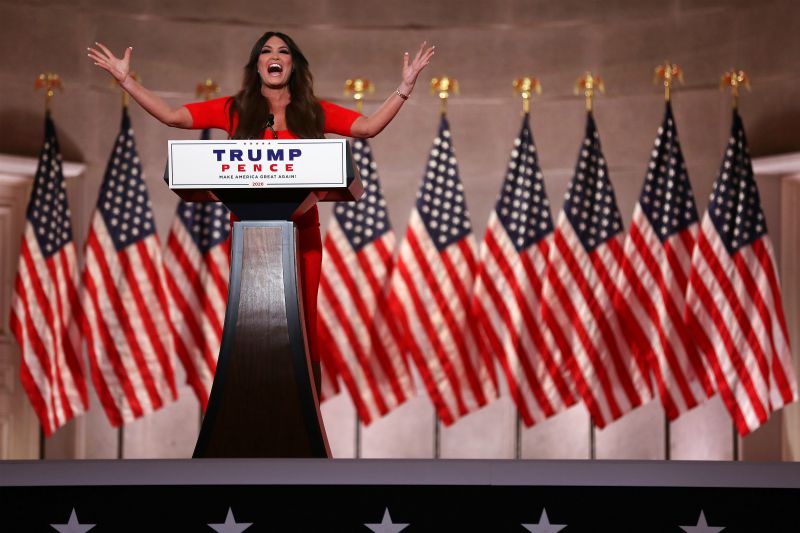 Former Fox News personality Kimberly Guilfoyle made a memorable visit to the podium during night one of the Republican National Convention, delivering (OK, shouting) a speech The New Yorker appropriately described as “high-key dystopian.”

Gesturing wildly with her arms, 51-year-old Guilfoyle—who’s currently dating President Donald Trump’s son Don Jr. and was once married to Democratic California Governor Gavin Newsom—warned the virtual audience that if Joe Biden and Kamala Harris are elected in November, the United States is certain to befall the same fate as Cuba or Venezuela—or worse, California.

“If you want to see the socialist Biden-Harris future for our country, just take a look at California,” Guilfoyle said. “It is a place of immense wealth, immeasurable innovation, an immaculate environment, and the Democrats turned it into a land of discarded heroin needles in parks, riots in streets, and blackouts in homes.”

“In President Trump’s America, we light things up,” she yelled. “We don’t dim them down.”

Kimberly Guilfoyle’s speech at the #RepublicanConvention seemed to make way more sense with North Korean propaganda music in the background.

Presumably, Guilfoyle didn’t always despise the Democrat-helmed state. The vociferous brunette, who attended undergrad at UC Davis and law school at the University of San Francisco, was married to now-Governor Gavin Newsom from 2000 to 2006. While they were together, Newsom was elected mayor of San Francisco, making her the city’s first lady for a handful of years. The couple cited the stress of living on opposite coasts (Guilfoyle had gotten a gig in NYC as an analyst for Court TV) as the reason for their split.

“Over the past ten years, we have developed a tremendous bond of love and respect for each other. That will never change,” they said in a statement.

I recently learned of this photo of kim guilfoyle and gavin newsom when they were married and I've just been finding any reason to share it pic.twitter.com/kCvbuGxoL1

Before she hooked up with Newsom, Guilfoyle also spent four years in Los Angeles, working as an assistant DA from roughly ’96 to 2000. As for her latest relationship, Guilfoyle reportedly began dating Don Jr. in April 2018. That would have been about a month after Jr.’s wife Vanessa filed for divorce after 13 years of marriage.

Guilfoyle wasn’t the only RNC speaker to set their sights on California. Florida Congressman Matt Gaetz painted a vivid image of a country where socialist Hollywood radicals would turn everyday Americans’ lives into a “horror film,” saying, “They’ll disarm you, empty the prisons, lock you in your home and invite MS-13 to live next door. And the police aren’t coming when you call. In Democrat-run cities, they’re already being defunded, disbanded.”