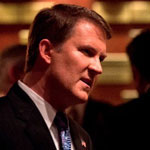 The question of which Democratic mayoral candidate Republican Kevin James would endorse—if any—in the runoff between Eric Garcetti and Wendy Greuel has been answered: the former attorney and conservative talk radio host announced his endorsement of Garcetti Tuesday.

In an interview with the Los Angeles Times, James pointed to Garcetti’s success at revitalizing the Hollywood area he represents as a city councilman plus his willingness to disagree with unions over policy and Greuel’s broad base of labor support as the reasons he chose to endorse Garcetti. “That willingness to stand toe to toe with the very powerful interest in the city—that’s something that’s attractive to me,” James said. It’s unclear how many James supporters (he picked up 16% of the vote in the primary election) will follow his lead in the May 21 runoff.

In addition to labor unions, Greuel has picked up a number of big-name endorsements, including President Bill Clinton, US Senator Barbara Boxer, and Magic Johnson.