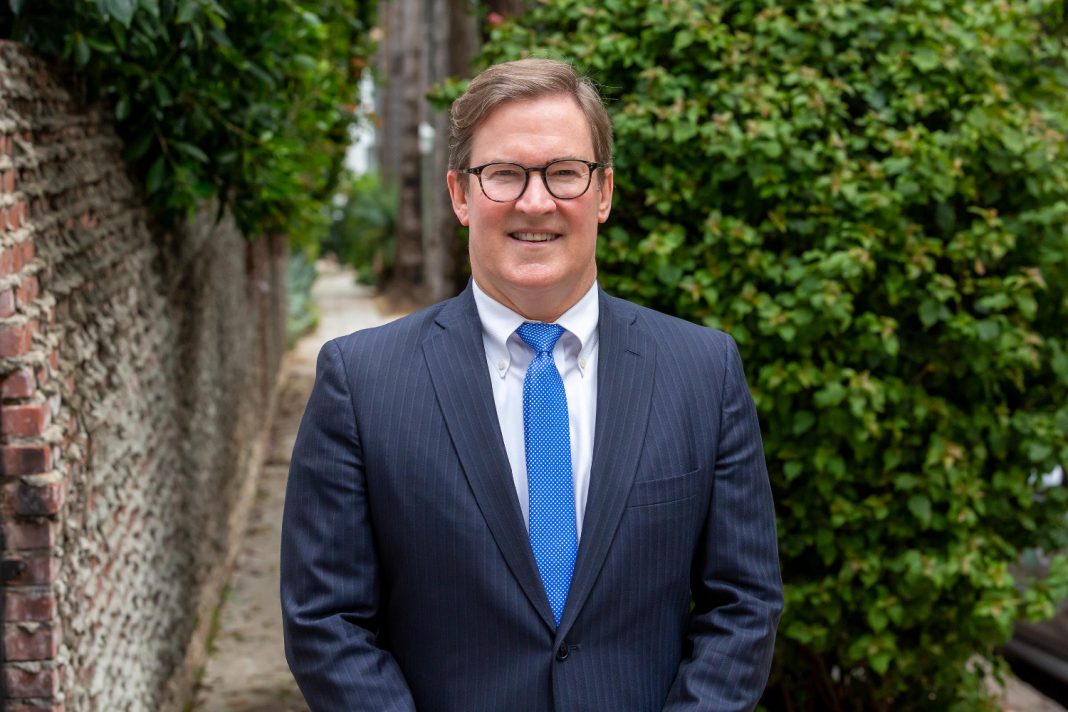 On Tuesday, Kevin James finished an improbable seven-and-a-half-year run in the upper reaches of City Hall. This morning he is taking a new step: James is launching a bid for City Attorney, and is filing papers to raise money to run for the city’s second-highest elected office. He hopes to succeed a termed-out Mike Feuer.

The primary election, which will likely feature a thick field, is in June 2022.

“Our neighborhoods and communities can be safer and cleaner,” James tells me shortly after 10 a.m. on New Year’s Day (he said he slept through any midnight fireworks in his Laurel Canyon neighborhood), explaining why he aims to become Los Angeles’ top lawyer. “I also think our legal policy toward homelessness and affordable housing has to change.

“I think City Hall needs to be trusted by the public again,” he adds. “And I bring an outsider’s instinct and indeed, a career of outside experience and sense to the job. But I also have real experience in municipal government.”

That outsider-insider duopoly is precisely what makes James interesting, as over the past decade he has undergone the unlikeliest of political transformations. When James ran for mayor in 2013, he was a Republican entertainment lawyer and gabtastic AM radio host betting, as he told me at the time, that a mix of his firebrand listeners and the “pitchfork and torch” crowd would propel his upstart bid (he earned just 16 percent of the vote).

Today, James is a 57-year-old registered Democrat who touts environmental efforts he might have once lampooned and packs relationships with a wealth of City Hall power players. The Oklahoma native who previously lambasted the state of Los Angeles’ infrastructure enters the City Attorney campaign hoping to use that very infrastructure as a calling card. Mayor Eric Garcetti appointed his onetime rival to the city Board of Public Works in 2013, and while many at the time predicted James’ stint on the paid panel would be short, he ended up spending seven years as the board’s president. For his final six months in City Hall he served as Garcetti’s chief of legislative affairs.

James says that during his time in Public Works, the city set nearly annual records for the number of lane miles paved, and took eco-friendly steps such as laying down “cool pavement” and increasing the use of recyclable materials. He points to steps such as directing more city contracts to minority- and women-owned businesses. “We created, under my motion, the first LGBTQ business certification [program] in the region,” he boasts.

It’s a resume that in June, during the last of his 1,041 Board of Public Works meetings, prompted a litany of accolades from board compatriots, city council members and department heads, as well as the presentation of a 15-pound trophy stocked with small cans of Dr. Pepper, a James favorite. One telling comment came from Garcetti Chief of Staff Ana Guerrero.

James is the fourth person to enter the race for City Attorney, and the field is likely to grow. Those already declared include Rick Chavez Zbur, the executive director of LGBTQ civil rights organization Equality California, who raised nearly $255,000 in the first campaign reporting period (which closed June 30; later tallies are not yet available); Marina Torres, a Stanford grad who worked on DACA and immigration policy in the Obama Administration, and who raised $92,000; and Teddy Kapur, who works for a large law firm and chairs the nonprofit Imagine LA.

James is garrulous, persuasive, and comfortable at discussing everything from manhole covers to department trust funds. Although he was dismissed early in his mayoral run as a gadfly candidate, he put together highly detailed position papers and proved to be deft on the debate stage. He plans to build his City Attorney run on a dozen principles, from using the office’s power in COVID response to combating corruption to labor relations. He proposes creating a legal aid unit in which volunteer attorneys work pro bono to help city residents with matters such as bankruptcy, employment and landlord-tenant law. He thinks Los Angeles should have an app to submit parking ticket appeals.

The centerpiece of his campaign will concern addressing homelessness (more than 41,000 people are experiencing homelessness in the city, and that was the tally before COVID-19 arrived) and affordable housing. It stands to be the defining issue for every candidate for any seat in 2022. It is also a subject Feuer has spent significant time and resources addressing.

James’ past could haunt him, particularly his former Republican party affiliation.

James does not criticize Feuer—who is running for mayor—but he maintains that he would often take a different tack when it comes to settling the litany of homelessness-related lawsuits the city has faced over the decades. In short, he says that if Los Angeles in involved in a legal imbroglio, he would seek to rope in neighboring cities—such as Santa Monica, West Hollywood, Redondo Beach, etc.—so that any ruling has a regional impact. If Los Angeles is going solo, he avers, then he’ll bring the fight.

“If the city of L.A. is the only defendant, and the only entity that is going to be participating, then I would not recommend a settlement. I think we ought to try that case,” James says.

Getting the opportunity to adopt that strategy won’t be easy. James estimates he will have to raise at least $2 million for the primary, and probably an equal amount in a runoff (which occurs if no candidate earns a majority). He’s got top strategist Bill Carrick (whose roster of clients includes Garcetti) on his team, and thinks he can secure support from labor unions and business interests he has worked with while on Public Works.

Still, James’ past could haunt him, particularly his former Republican party affiliation. James described his political evolution in a personal Medium post from last year, detailing how he arrived in Los Angeles in the 1980s seeking a community that would accept him as a gay man, and then registering as a Republican in 2007, spurred by economic and financial concerns and hoping to persuade conservatives to support LGBTQ issues. His time in the Garcetti administration, and a polarizing country, prompted him to shift again.

“Everywhere I look for support in my public service career, I am met by Democrats. And that’s not surprising, because in recent years I have felt isolated in the Republican Party,” he wrote on Medium. “That’s not just because my views have evolved and advanced. It’s also because the Republican Party has regressed.”

James recognizes that his opponents may use his past against him in a city increasingly embracing “progressive” ideals. To combat that, he’ll point to the tool reliably employed by City Hall denizens: his municipal resume.

“Look at my record and the work I have done. Period,” James says.

James acknowledges that being City Attorney is not his dream job—that would be coaching the football team at his alma mater, the University of Oklahoma. Given the unlikelihood of that occurring, he is aiming to be Los Angeles’ chief lawyer and legal strategist, and is doing so with a different approach that when he first ran for public office.

So, I ask him, what would the 2012 Kevin James—the brash outsider ripping the system—say about 2020 Kevin James?

“My evolution may be more stark than others, but everybody has their own journey.”