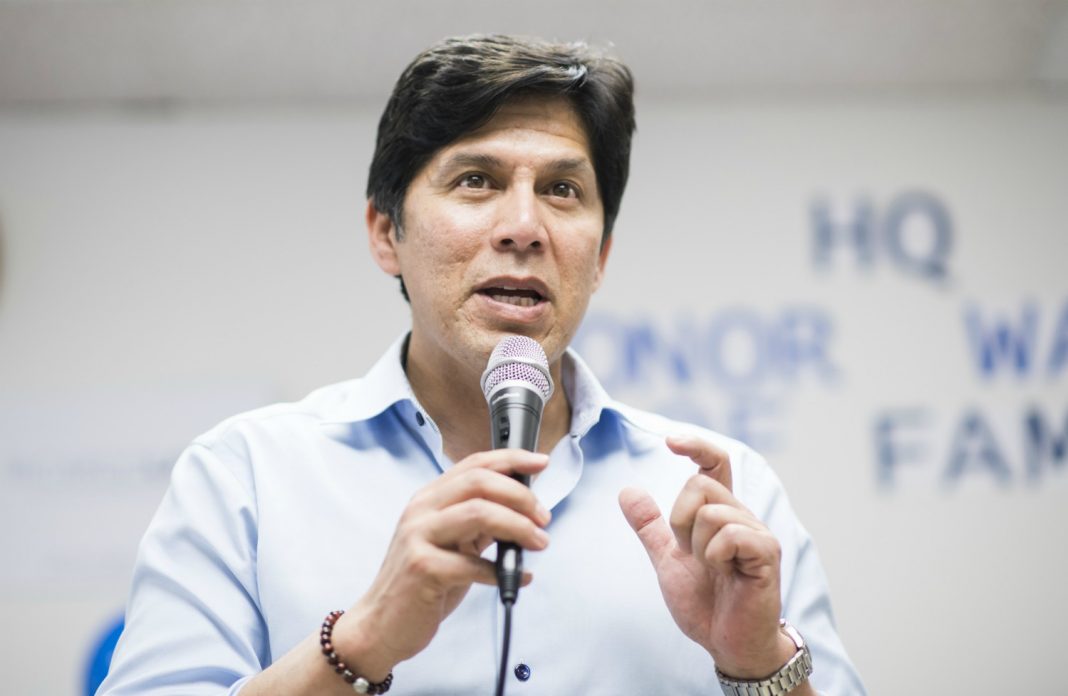 It’s unlikely that any incoming Los Angeles City Councilmember has ever faced a more difficult starting point than Kevin de León. He’ll take office amid a global pandemic. His district, District 14, includes the teeming tent encampments of Skid Row. Then there’s the shadow cast over the district by the federal investigation into José Huizar, the suspended councilman who faces 34 federal criminal counts including racketeering and bribery.

So how can de León convince the residents of Boyle Heights, downtown, and portions of Northeast L.A. that they can trust City Hall?

“I think it’s understandable that the voters are upset because of the cronyism and corruption that any wealthy corporation can come in and slip a dollar bill to politicians to help tip the scales. It would upset anybody,” he says. He goes on to detail how he plans to operate with “transparency” and explains that he has “never allowed any one individual or any one entity to influence the way I go about governing.”

It’s not a thorough prescription for restoring trust, but then again, no single interview answer is likely to assuage the concerns of skeptical residents. It will take the next councilmember months or years to repair the damage caused by the outgoing one.

At this point, probably the best de León can do is make a promise and live up to it.

“I am looking forward to diving right in and restoring that confidence for the people of CD14,” he says.

De León is a 12-year veteran of the state legislature who in 2014 became President pro Tempore of the California Senate, making him among the most powerful figures in the state. He was a skilled dealmaker and earned a reputation for environmental advocacy, pushing legislation and initiatives for clean air and more parks, including in low-income communities.

He’s a progressive Democrat as well as an ambitious one, and he perplexed many political observers when he challenged Dianne Feinstein for her U.S. Senate seat in 2018. He got thumped, earning just 12 percent of the vote in the primary. She cruised in the general election.

With his time in Sacramento done, de León followed the path trod by Assembly speakers Antonio Villaraigosa and Herb Wesson, and set his sights on the L.A. City Council. He ran against four competitors, trounced them in fundraising, and torched ’em on election day in March, securing 53 percent of the vote.

He’ll be sworn in October 15, a date moved up from the expected December 14 inauguration due to Huizar’s downfall. He’s unable to start sooner due to a terminal illness of a family member.

The ravages of COVID-19 and the need for leadership post-Huizar likely mean he won’t get the 100-day honeymoon incoming officeholders usually receive.

“Don’t need it. Never asked for it,” he responds. “It’s about rolling up your sleeves and bringing my experience from the state capitol.”

Everything is upside-down in the coronavirus era, including arranging interviews. I live about a half-mile from de León in Highland Park, and we tried to schedule a meet-up in the neighborhood. That plan fell apart in a week of 90-degree temperatures and cafes where patrons can’t sit six feet apart.

We arrange instead for him to walk over to my backyard on a Tuesday morning. He sits down for coffee at a shaded outdoor table wearing blue shorts and a green Friends of the Los Angeles River shirt with an outline of a frog. His red face mask has white V-O-T-E letters stitched across the front. When our cat walks over to sniff the stranger in the yard, he scratches her between the ears.

He speaks in a relaxed, thoughtful tone. He’s confident in his views and deliberate in his verbiage, sometimes taking pains to not repeat phrases or to find the perfect word, such as when he’s remarking on “the gap between the wealthy and the poor, or I should say the chasm, perhaps.”

If he weren’t in politics, you could see him as a college professor. Then again, he could probably make a fortune by swinging business deals.

De León grew up in San Diego and attended U.C. Santa Barbara and Pitzer College. He has long resided in Northeast L.A. He views Los Angeles through a Dickensian lens, though rather than London and Paris in the late 18th century, it’s a bifurcated City of Angels centuries later.

“I would say that we are sort of a tale of two cities,” he says. “One is what Hollywood has exported to the nation and the rest of the world. And the other side of Los Angeles is, news flash, a working-class city by and large: 50 percent Latino, mostly immigrant and undocumented.

“Sunset or 90210 or the Kardashians, that is a tiny fraction of Los Angeles. The overwhelming majority of Los Angeles is working class and working poor, people who are struggling every single day to make ends meet, to put a roof over their children’s heads, to put food on the table and clothes on their back.”

Just as de León has a take on the city, he has one on the district. He likes it so much that he touches on the theme twice during our discussion.

“[Council District 14] is not a, it is the microcosm for the city of L.A.,” he says. “We’re ground zero for homelessness. We have more luxury high-rises than any part of the city. At the same time we have more tents on the street. The largest number of freeways in America. Some of the most polluted areas within the state. It is also—I already used the word ground zero—it is the battleground for working families who are fighting to not be displaced and therefore gentrified.”

These topics are touchstones for de León; he swiftly lists the nine freeways that pass through the district and cites the air-quality and respiratory issues they pose. We discuss homelessness multiple times, as well as the hurdles to creating housing and possible ways to clear those hurdles. He says, “I believe that you have to break through the bureaucratic, Byzantine morass, and every single housing development goes to the top of the queue. No questions asked.”

Even as he prepares to take his council seat, questions swirl about de León’s future. The run against Feinstein reflected his ambitious nature.

There is speculation that, soon after taking the council seat, de León will announce a run for mayor, hoping to succeed Eric Garcetti, who is termed out in 2022. He was asked about this numerous times during the council campaign. He walked a delicate line, never copping to the mayoral vision, but also never denying it.

So it’s somewhat silly that I raise the topic—he’s aware of the speculation, and I know he won’t reveal plans until he’s ready. I finally just ask how he responds to the questions about possibly having limited time on the council.

“I haven’t even set foot in City Hall, let alone had time to even think about my future,” he responds. “My immediate and most urgent focus is on the residents of [Council District 14].”

“Council District 14 is not a, it is the microcosm for the city of L.A.” — Kevin de León

Toward the end of an almost two-hour discussion, de León launches into a story that sheds light on much of what we talked about. It builds on past chronicles of his being raised by a single, immigrant mother who worked as a housekeeper.

“This is something I never really said much. Not today, but just in general,” he says. “When I grew up, we were always just one paycheck away from being homeless. I remember living on 22nd Street in San Diego where the landlord would come bang on the door and, understandably, he wanted his rent. He would shout ‘Carmen,’ and my mother in Spanish would turn around at us—it was kind of goofy, but it was embarrassing at the same time—and would look at us and say, ‘Shhhhh. Shut up! And don’t make a move.’ And obviously my mother didn’t want to bring attention that we were actually in the house. We just didn’t have the rent to pay.

“That was embarrassing. So you fast forward, in high school I lived in an alley in a basement. Our rooms were padlocked…. There were different people living in different rooms. So we had padlocks. You didn’t want someone going in your room, taking stuff out. You know, in high school.

“That left a huge impression on me. And I think that when I became the leader, the first person of color in more than 133 years to assume the presidency of the California State Senate, those life experiences drove my policy decision-making. The fact that I grew up in a neighborhood that had a dearth of trees, or green grass, or shade. [It was] pure concrete, asphalt and cement.

“And I believe strongly that a child should have green grass grow underneath their feet regardless of their socioeconomic status.”

RELATED: The 116-Page José Huizar Affidavit Is Full of Stunning Details. Here Are the Highlights