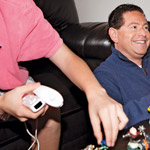 The video game company Activision Blizzard put on quite a party in Playa Vista in September for fans of its action-adventure title Call of Duty. Along with live paintball skirmishes, simulated battle scenes, and appearances by military personnel were row after row of computers armed with the game’s latest iteration, Modern Warfare 3. Roughly 8,500 Call of Duty aficionados attended the two-day event—staged inside the mammoth hangar where Howard Hughes built the Spruce Goose—but what really stood out were the millions of additional fans who watched via a live-streamed broadcast. Activision, which is based in Santa Monica, claims that only the royal wedding of Prince William and Catherine Middleton had a larger streaming audience. “It’s America personified in a video game,” one fan posted in a chat room. “Violence, patriotism, consumerism, and zombies.”

The eight-year-old Call of Duty franchise is a phenomenon all right, with sales in 2010 of $1.2 billion (7 million people play every day for an average of 54 minutes). Activision loves its blockbusters—there’s the online fantasy World of Warcraft (operated by the company’s Blizzard unit); Guitar Hero, where players use a guitar-shaped controller to mimic rock musicians; and Tony Hawk, the skateboard game that’s now in its 14th version. This fall saw the introduction of Skylanders, a collection of action figures whose character traits are connected to an onscreen adventure game through a wireless device. Kids can play on a TV, computer, tablet, or cell phone, swapping one figure for another.

Over the years Activision’s strength has been creating games for home consoles like the Microsoft Xbox and Sony’s PlayStation. But the industry’s growth is coming more from online social sites, notably Facebook. This is the world of casual games, which take less time to play, aren’t as competitive, have a largely female audience, and lack the incessant violence connected with something like Call of Duty. When you’re playing FarmVille, the struggle to raise virtual crops and livestock is about as heated as the action gets. Sims Social, a repurposed version of the console game from Electronic Arts, lets players create avatars that mix and mingle in a made-up community. “Gaming has broadened to much bigger audiences,” says Dave Martin, senior vice president of media at Ignited, an El Segundo-based marketing firm. “When I plant a new crop and the plant dies, all my friends are going to know about it.”

We’re talking silly games, nothing like Activision’s guy-oriented titles that provide snazzy graphics and a realistic player experience. Those remain Activision’s bread and butter, although the company has been under pressure—from Wall Street and else-where—to enter the casual ring. As of October Activision chief executive Bobby Kotick still wasn’t ready. “If we can’t put a creative foot forward, it’s not interesting to us,” he told me at the company’s headquarters, which is tucked in an office complex on Ocean Park Avenue. In assessing Facebook, Kotick says he’s been “trying to figure out what we could do that’s different from what’s being done. So now that they’ve gotten a large enough audience and we’ve done enough analysis of the opportunity, we can commit capital.” He adds, however, “We don’t have huge expectations.”

Kotick, who is 48, heads an efficient and reliable consumer goods business, the kind investors love. The company’s market value of $14 billion is nearly double that of Electronic Arts, one of its primary competitors, and Activision’s stock has increased 40-fold since 1994. One reason for this success is an aversion to risk: The company concentrates on a limit-ed number of titles with the potential to become long-term moneymakers. The strategy, which Kotick describes as “narrow and deep,” is similar to how film studios focus on megahits like Pirates of the Caribbean. Kotick clearly has a thing for Hollywood: He speaks at length about wanting to infuse video games with better stories and characters. (He also appears briefly but convincingly as the owner of the Oakland A’s in Moneyball, his first movie role.) “What I’m good at,” says Kotick, looking very much the studio boss with slicked-back hair, an open-neck white dress shirt, and a blue blazer, “is making sure we have the best resources, the best talent, the best marketing, and the best access to distribution.”

Actually the video game business has been structured a lot like the movies. Much of the business is controlled by Activision, Electronic Arts, and a handful of other large publishers (they’re comparable to the studios), while hundreds of small development houses (production companies) are owned by the publishers or have contractual arrangements with them. The developers, who include writers, artists, and programmers, create the titles, which the publishers distribute and market. As players demand better graphics and more complex plotting, production budgets have become massive, with a major game frequently running $50 million and up, compared with a couple hundred thousand dollars three decades ago. Marketing can cost another $50 million or so, and there are ancillary expenses like customer service that movie producers don’t have to worry about (Blizzard spends upwards of $100 million a year just to operate call centers for World of Warcraft). “The hits have to hit hard and fast because the life cycle of an individual title is typically 24 to 30 months,” says Jordan Weisman, chief executive of Harebrained Schemes, a Bellevue, Washington, gaming company. “So you have to get all of your revenue right away. That’s why it’s a challenging business.” Last year U.S. video game sales were $15.9 billion, while Hollywood’s domestic box office was $10.5 billion.

Activision was started by four former Atari programmers in 1979, a period of industry soul-searching after the rise and fall of the first video game hit, Pong. The company had a successful stretch in the 1980s (Kaboom! and Pitfall! were huge), but a misguided expansion into business software led to enormous losses. Then someone had the unfortunate idea of changing the company name from Activision to the nerdy-sounding Mediagenic. By 1991, the business was at death’s door, with $30 million in debt and $2 million in assets. Along came the peripatetic Kotick, who was in his twenties and had cobbled together a résumé that included restringing tennis rackets, renting out New York’s Studio 54 on off nights, and starting a software company that briefly competed with Apple. “I never studied business,” says Kotick, who majored in art history at the University of Michigan. “It’s either in your DNA or it isn’t.”

Kotick orchestrated a bankruptcy reorganization that left him operating the company with three partners, among them Las Vegas casino mogul Steve Wynn, who had befriended Kotick some years earlier. They changed the name back to Activision and moved from Silicon Valley to Santa Monica because Kotick figured that being close to Hollywood talent might lead to games that resemble movies and TV shows. As it turns out, there’s not much overlap—L.A.’s video game industry is relatively compact, with a full-time workforce of about 6,000, plus several thousand freelancers (the entertainment industry employs 20 times that amount). Activision is a kind of mother ship—you’d be hard-pressed to find anyone in the business who hasn’t been connected with the company in some way. “We used to refer to Activision as ‘Game College,’  ” says Eric Gewirtz, who worked there in the late 1990s as an intern and went on to become a designer for several titles before cofounding Seismic Games. “Tremendously long hours and a college dorm life mentality—it was a blast.”

Opinions about Kotick are not nearly as effusive, largely because of what some consider an intemperate style (he once called Activision’s corporate culture a mix of “skepticism, pessimism, and fear”). Not being a big gamer himself doesn’t help Kotick’s standing. Jeffrey Katzenberg, head of DreamWorks Animation, described him in Forbes as “a crazy, ambitious, funny lunatic.” Kotick went through a well-publicized skirmish in 2010 when the two former lead developers of the production house Infinity Ward filed suit against Activision. They say that the company fired them on trumped-up charges of insubordination and breach of contract right before they were to receive sizable royalty checks for Call of Duty: Modern Warfare 2. Activision countersued, claiming that the developers were “self-serving schemers who attempted to hijack Activision’s assets for their personal gain.” The case remains in litigation. About 30 Infinity Ward staffers siding with the developers quit over the squabble, though Kotick is quick to point out that the production house received 5,000 résumés after their departures. “I’ve had the pleasure of being sued by Bobby a number of times,” says Weisman. “It’s almost a sign of affection from him.” Like other game developers, he admires Kotick but says that creative types are treated too much like commodities that can be easily replaced.

When I bring up his less-than-flattering reputation, Kotick shrugs. “Look, I can’t control what people write or say. They spend a lot more time thinking about that than I do,” he says, claiming that the comments he makes at investor conferences often get blown out of context (video game bloggers are prolific and often fiery). “Besides,” he adds, “it’s very easy to criticize the CEO of the market leader. I’m here because the shareholders give us the capital to generate a return, which we do.” For all the parallels with Hollywood, Kotick runs Activision like a packaged goods business, which means being cautious, unemotional, and focused squarely on profit. That’s why he’s dragging his heels about social networks. The business model is just too shaky.

Last summer San Francisco-based Zynga, which created FarmVille and other casual games for use on Facebook, began preparing a public offering that valued the company at up to $20 billion—an insanely high number for a business that’s only four years old. Then came a sharp drop in earnings, followed by the stock market tumble, and by October the number being thrown around was closer to $10 billion. With the IPO being finalized, reality is setting in. Since Zynga’s games don’t cost anything to play, the company makes its money through the sale of add-on virtual goods like imaginary chickens or skyscrapers—and only 5 percent of the 150 million unique monthly users spend money on those items. In addition, Facebook takes a 30 percent cut of whatever Zynga collects. True, the games are relatively cheap to develop, but when so few players are paying customers, it’s bound to raise questions. Recognizing the vulnerabilities, Zynga has announced plans to start its own social network, though it will continue to offer games on Facebook. Denis Dyack, president of Canadian video game developer Silicon Knights and an outspoken critic of casual gaming, told a trade publication earlier this year that when the business crashes, “it’s going to crash very hard. I don’t see there’s an economy there.”

That’s why I like Activision’s go-slow approach. Media companies are throwing lots of spaghetti against the wall these days to figure out how best to deliver entertainment content, whether it’s in movies, TV, books, or video games, and everyone still seems to be searching. Do you rely on advertising or subscriptions or pay as you go? The confusion could continue for years—and even when the new ways of business are more or less established, Activision might fare best by expanding in its own way and at its own pace. “You put some things out there,” says Kotick. “Some work, some don’t, and then one really takes off and that pays for your failures. Then you go on to the next one.”

The Voice Actors Behind Video Game Characters Are Famous, but Also Nearly Invisible