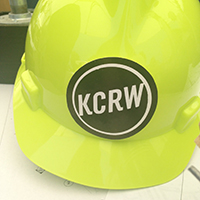 KCRW will finally see the light of day. The public radio station, which has existed for more than 30 years in a cramped warren of underground studios on the campus of Santa Monica College, is getting a spacious new home.

On Wednesday of last week, the college and the radio station broke ground on a massive joint project: a 38,500-square-foot facility. Located at 1660 Stewart Street, about a mile-and-a-half northeast of SMC’s main campus, it will be home to Santa Monica College’s Academy of Entertainment & Technology Campus.

During the last three decades, KCRW grew from 14 staffers to 110, so you can imagine the space issues. Those should be resolved when the facility opens hopefully in early 2016. Total cost: $91 million.

The three-story building designed by Clive Wilkinson Architects will contain a 1,400-square-foot studio where approximately 40 people can watch performances during shows like Morning Becomes Eclectic. It will also include a 180-seat auditorium and a large courtyard where the station plans to host concerts and other events. The campus will also include a 50,000-square-foot teaching facility with TV and production studios, a cafe, and a 430-space parking garage.

At Wednesday’s groundbreaking ceremony, which featured a short performance by Ben Harper, KCRW music director Jason Bentley described his first gig at the station. He started in 1988 as a volunteer, answering playlist questions. Listeners would call and ask what songs were on the air and he would jot down the caller’s address, print out a hard copy of the playlist, and mail it to them—in an envelope with a stamp. Like the station, he’s come a long way.