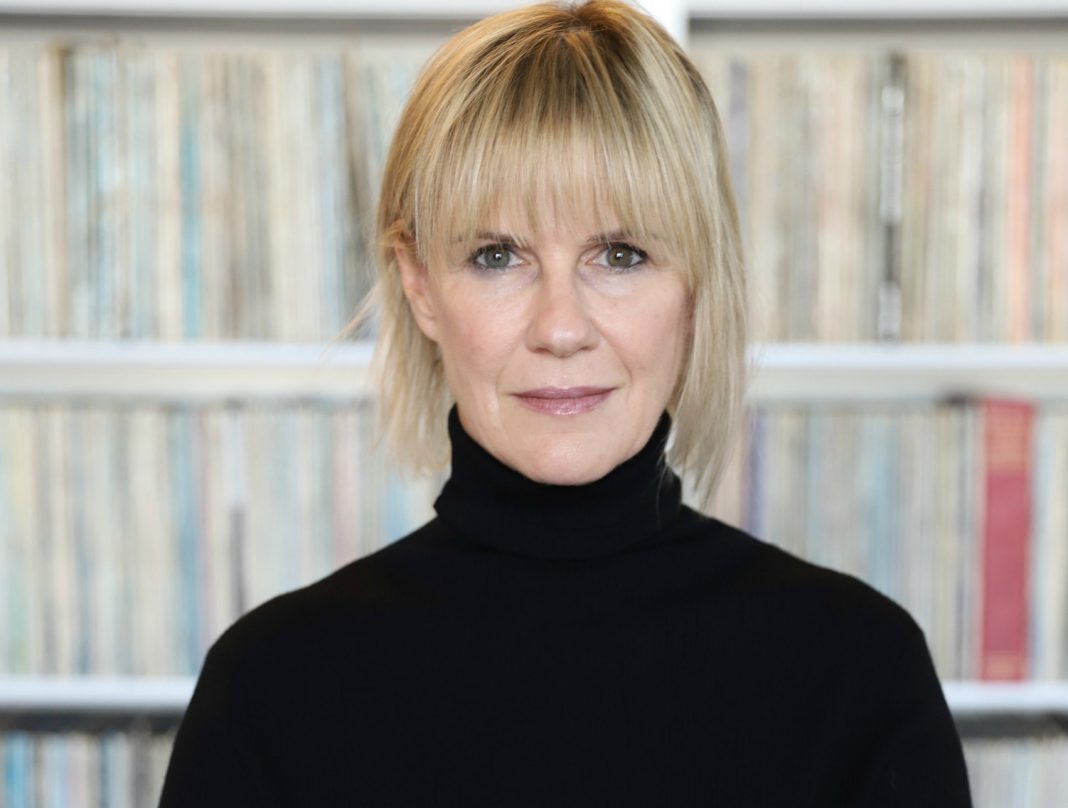 Longtime KCRW DJ Anne Litt has just been named the station’s new music director (or program director of music, as her official title will read). She’s the first woman to lead the beloved local tastemaker music station, which has a national reputation for breaking new music. Litt’s been on air at KCRW since 1996, and follows Jason Bentley, Nick Harcourt, Chris Douridas, and Tom Schnabel (in reverse chronological order) in the music director role. Since Bentley’s departure last summer Litt has served as interim music director. In the past, the KCRW music director also hosted KCRW’s signature music program Morning Becomes Eclectic (MBE), however, as KCRW has expanded, the two positions will now be separate. Litt will help choose the new MBE host, and until then she’ll host the program.

Litt, who confesses that “I wanted to be a DJ since I was little,” grew up in Richmond Virginia. She would record University of Richmond radio programs she liked off the radio to play over and over again on her cassette player. At the University of North Carolina, she did college radio at WXYC which she describes as “probably my favorite thing that I did there.” After graduating she worked in commercial radio in North Carolina, and worked for Mammoth Records, an independent label. “I did everything, radio, publicity,” says Litt. “I was [also] the bookkeeper which they should have never let me do.” Then she moved to California and soon joined KCRW.

During Litt’s time at KCRW she’s hosted a long-running weekend program, as well as filling in wherever and whenever needed. Her tastes do run to the eclectic—for example her 2019 end-of-year favorites list included Automatic, J.S. Ondara as well as Karen O and Danger Mouse. She’s also hosted KCRW’s World Music evenings at the Hollywood Bowl.

You’ve been hosting an afternoon show on KCRW and you’ve subbed on MBE many times, but is there anything different about being appointed program director of music?

You know when it’s your birthday, and people say: Do you feel older? And you’re like, No. [Now, instead] I feel it. I feel excited to have this opportunity…. To have this moment is really exciting.

MBE, for those who listen to it regularly, it’s an ongoing relationship that’s part of their lives.

In fact, I met a guy who was a listener and he said that when he was sick in the hospital, he knew what time of day it was by listening to KCRW all day. So, when you asked if it feels different, it feels like…I feel confident and I’m happy and grateful for the opportunity to share [the music].

Each of the prior music directors—Tom Schnabel, Chris Douridas, Nick Harcourt, and Jason Bentley—had a certain flavor that they brought to the station and the artists they championed. And, I can’t help but point out that they were all male. So, do you believe you will be bringing an added dimension to being KCRW’s music director that perhaps hasn’t been there before?

That is one of the things I’m most interested in doing. Look, we all come at it [from] different points of view. I grew up in the South in the ’80s, and I joke [that] I’m a Jack of all trades and master of none, but I love so many different kinds of music. I love Brazilian music and I grew up in a house where my parents were listening to everything from Dave Brubeck and Herb Alpert and the Tijuana brass. And my mother loved Barry Manilow, The Carpenters, Harry Belafonte, and Johnny Mathis. and then I started to discover my own [music] and was going to concerts.

The reason listening to radio always appealed to me is that it’s visiting a new world. It’s learning something new about a different culture or a different time in history. Or about someone thinking in a different way than me [that] I’d never thought of until I heard that. I find that so fulfilling and it’s my sustenance. It’s what I hunger for. The other thing I love [is] as we go global with the Internet and technology, I’m hearing all these genres starting to blend with each other. You can talk about Kamasi {Washington] or a Thundercat and Kendrick Lamar, [and] Flying Lotus and that, to me, sounds like Southern California as much as the Beach Boys or Los Lobos. When I listen to KCRW, I hear Southern California.

When people talk about MBE, they tend to focus on the eclectic. But I wondered if you have a sense of what “morning” music should be?

That’s an interesting question. Look, I think one of the things that Jason did that I thought was great was to bring some of the nighttime to the morning. I think people do want to feel optimistic in the morning. But It’s not something I think about, it’s more of a sense of [the broadcast]… let’s go crazy this morning, or I play play Lizzo into [a whole set] and sometimes people are feeling it. So morning music, I think it rolls around in my subconscious.

Traditionally, the host of MBE has also been KCRW’s Music Director, but those functions are now going to be separated. Do you think that makes sense?

It’s such a different landscape [now] because there’s digital, and we’re doing more events than we’ve ever done before. It’s become too big a job for one person. I’m actually doing both jobs right now and it’s a lot. I think it’s a smart idea to separate out the two jobs. I really do.

There’ve been so many changes at KCRW with its new headquarters and studios, is there a sense of the mission having expanded as well?

I think that our mission is to serve the community, to present this mix of news and music and culture, that is unheard of in public radio. So, I don’t think the mission has changed. But If we [now] have the capacity to host more artists and break more artists or to have events in this beautiful performance space — We couldn’t do that before. So, we can say: How can we better serve our music community? And the news community is doing it too. What I feel is that we’re becoming better able to push the mission further out. To expand on it.

Strangely enough, each of the prior music directors each held the job for a decade. Are you looking at your becoming program director of music as a ten-year gig?

I would love to be of service for as long as it makes sense for me and for the station. It’s slightly coincidental that it’s all ended up being ten years. You know, I love KCRW. My joke, and I said this in the fundraising letter I sent out, is that KCRW is the longest-running relationship in my life (and I’ve been married twice, so that’s saying a lot). I so believe in what we’re doing and what we’ve built and what we continue to build, that I’d like to be of service as much as I can, in any way I can, for as long as I can.

RELATED: Jason Bentley Explains Why He’s Stepping Down at KCRW