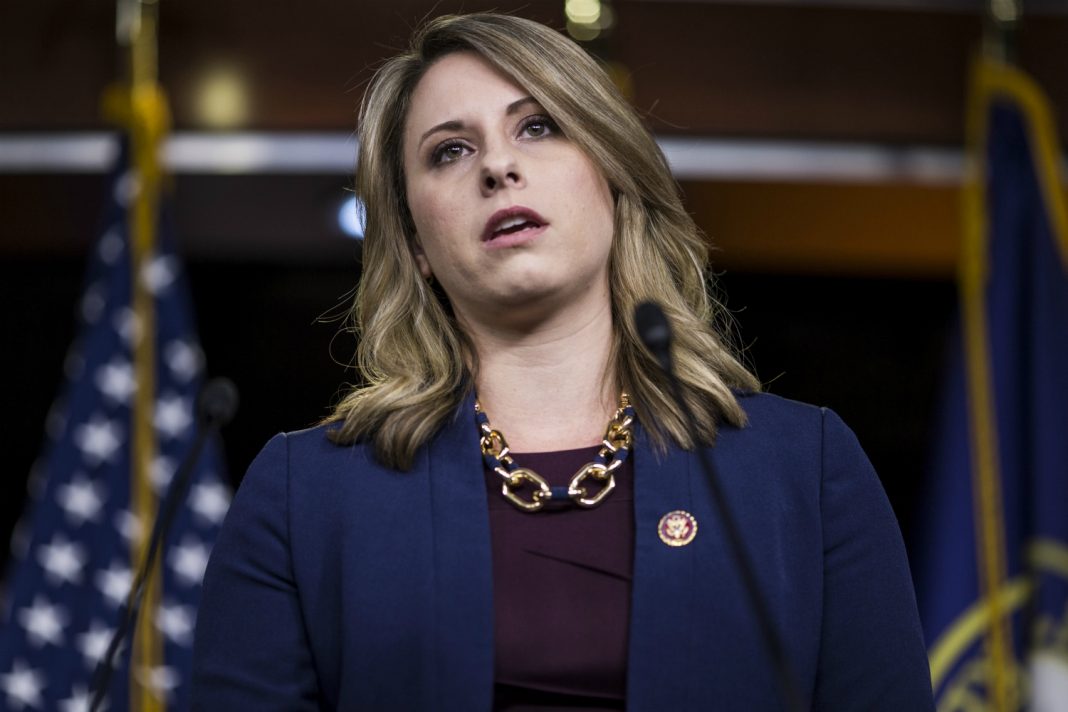 Tuesday was shaping up to be a big day for former California Congress member Katie Hill. As the Hollywood trades reported yesterday afternoon, her recent autobiography, She Will Rise: Becoming a Warrior in the Battle for True Equality, has been optioned by megaproducer Jason Blum to be adapted as a movie starring Elisabeth Moss. Hill herself will serve as an executive producer on the project.

Shortly after the news was made public, however, a series of nine tweets dispatched from her Congressional Twitter account put a damper on the excitement. Credited to “Katie’s former staff,” the tweets allege workplace harassment and abuse of power. “Disappointed in so many folks,” the Twitter thread, which is still live, begins, “Including Elisabeth Moss, @Blumhouse, & [writer] @michaelseitzman – regarding today’s announcement. This is an incredibly sensitive situation. We appreciate the instinct to defend our former boss, an LGBTQ+ woman who faced abuse from her husband.”

“Katie Hill can be both a victim and perpetrator,” one of the tweets reads. “And, staff can experience severe consequences for speaking out against their powerful boss.”

“Katie took advantage of her subordinates,” another tweet claims. “She caused immense harm to the people who work for her, many of whom were young women just beginning their careers in politics.”

“Thanks to all who let me know my government official Twitter account was hacked,” Hill tweeted from her personal account early Wednesday. “Control of my account was immediately handed back to the House Clerk when I resigned, including password changes and access restrictions.” Prior to the offending tweets, the account hadn’t been utilized since October 2019, when Hill stepped down from her seat amid scandal.

In 2018, a 31-year-old Hill managed to defeat incumbent Republican Steve Knight to represent California’s 25th Congressional District, which includes parts of the Antelope Valley, Santa Clarita, and Simi Valley. Her book, recently excerpted in Los Angeles, details the darkness behind the underdog tale, including a cycle of domestic abuse that led to Hill’s resignation from Congress following conservative blog RedState’s release of intimate photos and sordid details of affairs, one of which Hill admitted was a consensual polyamorous relationship. Hill has accused her ex-husband, Kenny Heslep, of leaking the intimate images as a form of revenge.

Reached for comment, Hill directed us to her statement on Twitter: “Regardless of their author, the content of the hacked tweets is something I have talked about at length in my book, in podcasts and in countless interviews regarding my decision to resign, as well as the constant work and reflection I’ve done since then.

“I look forward to continuing to have conversations around these issues and using my platform to support women in any way possible.”

RELATED: In a New Memoir, Katie Hill Recounts Battling Through the Scandal that Almost Destroyed Her

Who’ll Be Next to Land a Coveted Spot on the L.A. County Board of Supervisors: Herb Wesson or Holly Mitchell?

The People on These Political Signs All Have Something in Common

Can a Fervent Trump Supporter Keep His Seat in a Purple California District?