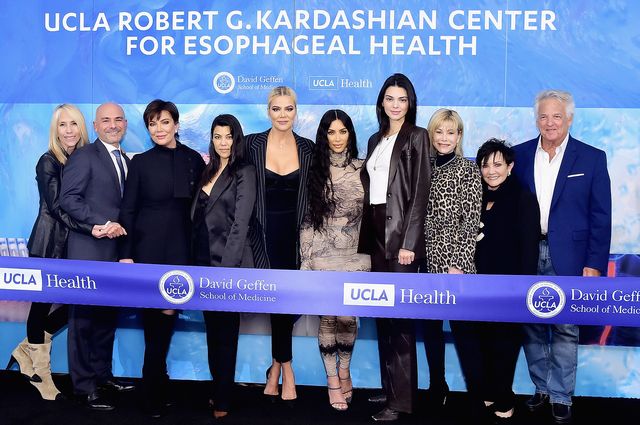 Robert G. Kardashian—the prominent L.A. attorney who defended O.J. Simpson and sired Kim, Khloé, Kourt, and Rob—died of esophageal cancer in 2003, just two months after being diagnosed with the illness. Now, to honor his memory and help prevent the cancer that killed him from claiming more lives, the Kardashian-Jenner family has partnered with UCLA to establish the Robert G. Kardashian Center for Esophageal Health.

The new center, part of the university’s David Geffen School of Medicine, will treat patients with an integrative approach that combines cutting-edge cancer treatments with preventive care including nutrition and wellness-based approaches.

Recently, the number of people diagnosed with esophageal cancer each year has risen, according to a statement by UCLA announcing the new center. Cases may be triggered by diet, lifestyle, or gastroesophageal reflux disease; many patients don’t even notice symptoms during the early stages when the cancer can most effectively be treated.

“Our family is proud to pay tribute to our father by partnering with UCLA Health to establish the Robert G. Kardashian Center for Esophageal Health,” Kim Kardashian West said at a ceremony on Tuesday. “We hope to save lives and help the community for many years to come in honor of our father.”

In addition to lending the Kardashian name to the center, the family will be leading on-going fundraising efforts to support the initiative.

Kardashian West is also honoring her father’s legacy in another way of late, with the recent announcement that she’ll be following in his footsteps pursuing a new career as an attorney.

RELATED: The Renegade Doctor of Skid Row Is Caring for Homeless Addicts in Revolutionary Ways