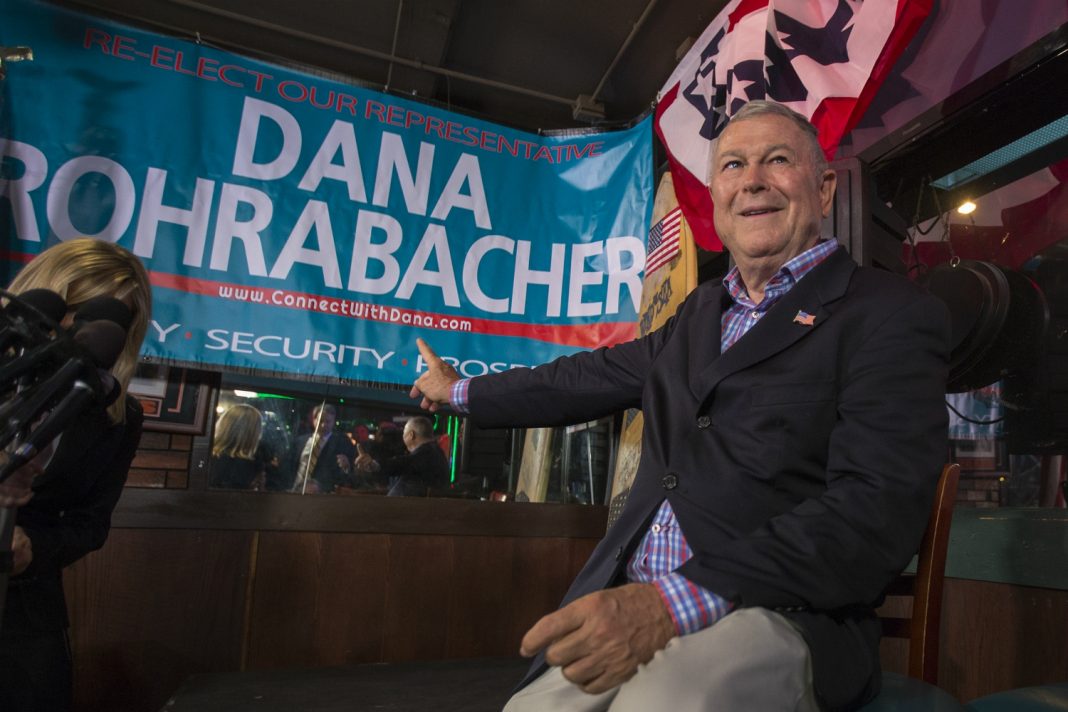 Former Orange County representative Dana Rohrabacher confirmed in an interview and in a post on his website that he offered to obtain a pardon for WikiLeaks founder Julian Assange in exchange for disproving that Russia had been the source of hacked emails from the Democratic National Convention.

The allegation that Rohrabacher had offered Assange a presidential pardon first came out in a London court on Wednesday, where Assange appeared via videolink to fight his extradition to the United States. Edward Fitzgerald, a lawyer for Assange, pointed to the pardon offer as evidence of the politics tainting the case against his client.

There is a lot of misinformation floating out there regarding my meeting with Julian Assange so let me provide some clarity on the matter: https://t.co/4ujr21e6YH #FreeAssange #SethRich #justice

The White House has also strenuously denied the claim that it had any involvement in Rohrabacher’s scheme.

“The president barely knows Dana Rohrabacher other than he’s an ex-congressman,” White House spokeswoman Stephanie Grisham says. “He’s never spoken to him on this subject or almost any subject. It is a complete fabrication and a total lie.”

Rohrabacher confirmed that in 2017—while he was in office in California—he met Assange for a three-hour meeting in the Ecuadorian Embassy, where Assange lived for seven years to avoid prosecution for charges of rape in his native Sweden.

The former congressman described the meeting as a “fact finding mission.”

“I spoke to Julian Assange and told him if he would provide evidence about who gave WikiLeaks the emails I would petition the president to give him a pardon,” Rohrabacher told Yahoo News. “He knew I could get to the president.”

After his meeting with Assange, Rohrabacher called White House chief of staff John Kelly to discuss the possible arrangement. While the phone call was “courteous,” Rohrbacher said that neither Kelly nor Trump followed up with him.

Rohrabacher hoped to obtain evidence from Assange in support of a roundly debunked conspiracy theory claiming that former DNC staffer Seth Rich, not Russia, was the source of the DNC emails disseminated by WikiLeaks. Rich was murdered in 2016 in what Washington, D.C., police describe as an attempted robbery.

Rohrabacher, Republican, represented Orange County from 1989 to 2018, when he lost his bid for reelection to Democrat Harley Rouda. Throughout his congressional tenure, he has departed from his Republican colleagues in his strong support for Russia and Russian President Vladimir Putin, leading to questions about his relationship to the country. The FBI warned the congressman in 2012 that the Kremlin had given him his own codename and regarded him as an intelligence source.

Others on the 2016 phone call laugh, before McCarthy adds: “Swear to God.”