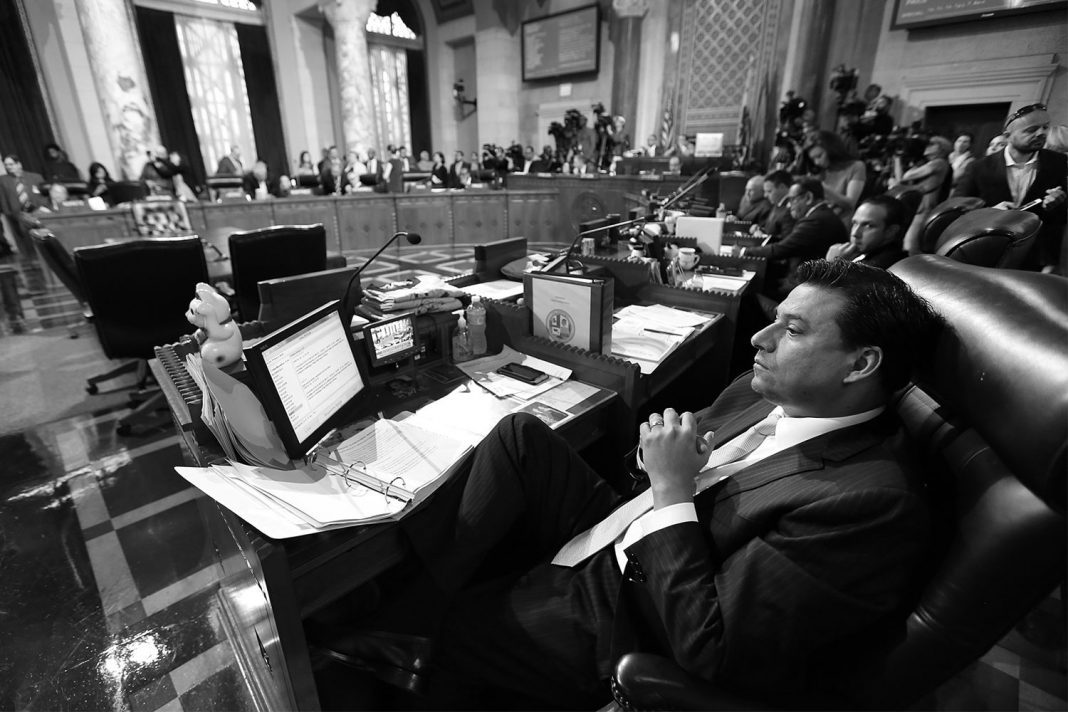 As I’ve watched the implosion of the career of District 14 Councilman Jose Huizar, I’ve encountered an unexpected feeling. At first I thought it was indigestion, but when a grand jury returned a 34-count indictment against him last Thursday afternoon—including charges of RICO conspiracy, money laundering, and bribery, oh my—I finally recognized what it is: disappointment.

I’m not being facetious. As a journalist I covered Huizar for 15 years, and became habituated to a big grin and a sometimes bounding puppy-dog energy—the guy was easy to like. Sure, he made some forehead-smacking missteps, and we had our ups and downs depending on what he thought about what I wrote, but until everything came crashing down he seemed earnest and eager. He had big plans and visions, some of which he achieved, to the benefit of his district.

The allegations laid out against him in a 116-page Department of Justice complaint have sparked disgust in and outside of City Hall, not only for what he is accused of, but also because his approximately 250,000 constituents have been left in the lurch. After the infamous FBI raids of his home and offices in November 2018, Huizar was stripped of his committee assignments and effectively politically neutered.

Huizar had everything, but it’s all been squandered. His reputation has been torched and he faces decades in prison, and for what? Greed? A pile of cash? It’s all a stunning case of political malpractice.

I first met Huizar when he was a school board member on the rise and a favorite of Antonio Villaraigosa. When AnVil trampolined from councilmember to mayor in 2005, the political machine revved to get Huizar elected to the vacant District 14 seat. I covered his campaign, and for one story walked precincts with him on an afternoon in Eagle Rock. I still remember him encountering a long-haired dude he knew who had played in a heavy metal band he liked—Huizar would wear sharp suits in City Hall, but the rocker never left the building. In 2017 he facilitated the creation of an Arts District mural of Mike Muir, the vocalist of one of Huizar’s favorite bands, L.A. legends Suicidal Tendencies.

Huizar won his first council race the same day as Herb Wesson, a shrewd political operator and the former speaker of the State Assembly. Wesson became council president and two developed a tight alliance; when the District 14 rep was under fire in 2014 for having an extramarital affair with a staffer, Wesson appeared at a downtown fundraiser and from the stage called Huizar “my brother, my best friend on the council.” It was Wesson (now running for County Supervisor) who installed Huizar as chair of the council’s powerful Planning and Land Use Management Committee.

The post afforded Huizar tremendous influence over real estate developments proposed in Los Angeles, and he gained double power by virtue of representing downtown, where developers were investing billions to construct residential skyscrapers to serve a well-heeled people who want to live close to where they work. Court documents allege that Huizar secured more than $1.5 million in cash bribes and other illicit benefits, and in exchange helped push favored projects through the cumbersome and costly city approvals process. Prosecutors also assert that he sat atop a criminal enterprise that existed to enrich the cabal in the present and the future; the filings allege efforts to funnel funds to the political campaign of a relative. Indeed, in September 2018, Richelle Huizar launched a campaign to succeed her husband on the council, though she quit the race two months later, after the FBI raids.

Richelle Huizar has not been arrested or charged with a crime, but four other individuals, including ex-District 12 Councilman Mitch Englander—have either pled or agreed to plead guilty. All have pledged to cooperate with investigators about the alleged pay-to-play scheme.

When I first started reporting on Huizar, there was so much promise. His personal story was compelling; born in Zacatecas, Mexico, he was four years old when his father moved the family to Boyle Heights. He overcame youthful troubles including getting kicked out of school, and would go on to earn degrees from Berkeley and Princeton. He’s the father of four kids and, before the affair, was prone to publicly gush over Richelle; I remember numerous events where, from the stage, he’d refer to “my beautiful wife” in the audience.

For a while I experienced him as both a constituent and a councilman I was covering. My home was in District 14 until the 2011 redistricting process (the city boundaries changed; I stayed put), and I saw him at everything from a neighborhood watch meeting to the public inauguration of a “parklet” on York Boulevard. One Sunday afternoon our families crossed paths at a kid-friendly restaurant in Highland Park. We walked in at about the same time, both of us with the same dumb “what are you doing here?” look on our faces.

He scored some notable wins. I covered a 2008 press conference in a historic downtown theater where he announced the ten-year Bringing Back Broadway initiative. It was easy to dismiss, as there had been numerous failed efforts to revive the thoroughfare that was home to a dozen gorgeous-if-faded movie palaces. But it was under Huizar that Broadway finally enjoyed a turnaround, welcoming the Ace Hotel, a clutch of trendy stores and, oddly, a collection of sneaker shops. His envisioned streetcar may never materialize, but he pushed the once-forlorn stretch forward.

He sought to make downtown and other neighborhoods more walkable, and propelled a plan to reimagine the concrete catastrophe that is Pershing Square. Even if the downtown development boom is tainted due to the ongoing investigation, the community is far more vibrant than it was when he arrived. He had a number of ardent supporters who would step up when called.

Yet even when things were rolling, Huizar was prone to mistakes. The Los Angeles Times in 2011 reported that his office compiled “power analysis” lists that graded civic leaders based on their support for the councilman and their level of influence in the community. In the 2013 city primary elections, not one of the eight people he endorsed finished in first place, which is a spectacular record of misses. Later that same year Francine Godoy, a former staffer in his office, accused him of sexual harassment and retaliation. Huizar denied the charges but admitted to a consensual affair.

The corruption investigation sparks headline after headline, but there’s no joy in seeing Huizar go down.

A lawsuit filed by Godoy was privately settled. Court documents released as part of the corruption investigation allege that $600,000 to pay for the settlement was provided by the head of a Chinese development firm seeking to build a high rise in downtown. Everything, it seems, comes full circle.

The corruption investigation sparks headline after headline, but there’s no joy in seeing Huizar go down, no pleasure knowing that the residents of Boyle Heights, downtown, and Northeast L.A. have barely had political representation for two years. He faces arraignment on Monday, August 3.

He seemingly had everything: a hefty salary, a beautiful family, a growing legacy. The name “Jose Huizar” was primed to go down in the L.A. history books.

It still will, but not for the reasons anyone expected—or wanted.

The Redistricting Process Is a Cartographic Murphy’s Law