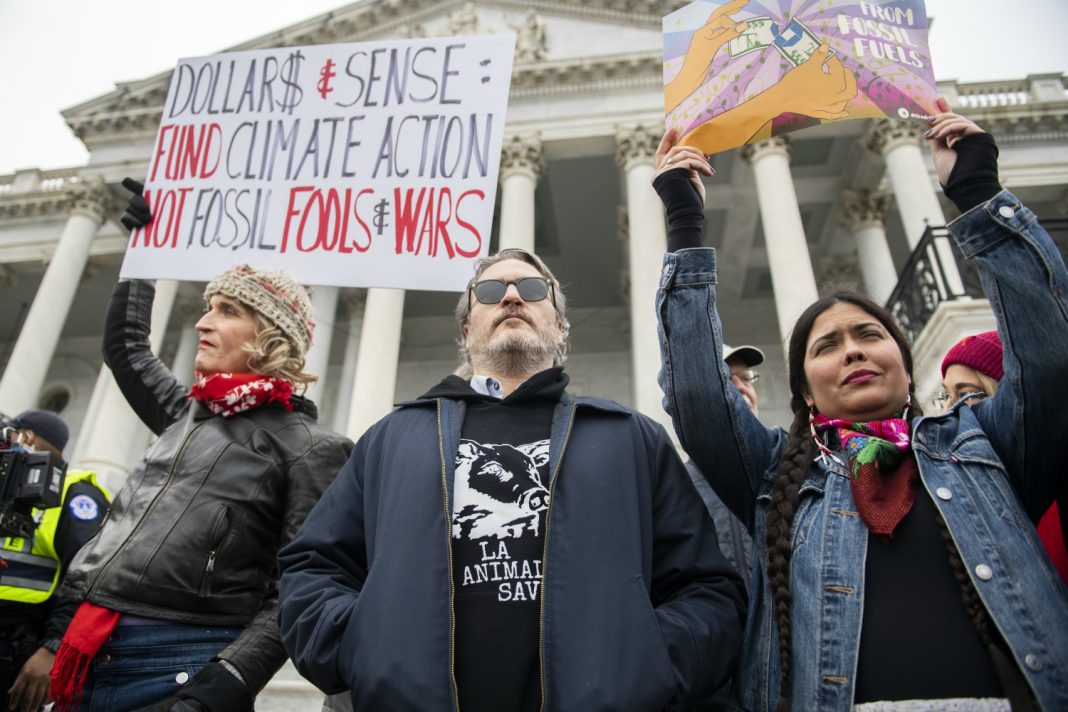 Prior to the protest being broken up, Phoenix took the podium to promote veganism as a way to combat the global climate crisis.

“I struggle so much with what I can do. At times, there are things I can’t avoid. I flew a plane out here today, but one thing I can do is change my eating habits, and so I just want to urge all of you to join me in that—and you as well, Jane,” he said. In the past, Fonda has described herself as “not quite vegan.”

On Sunday, Phoenix made a similar appeal to a room full of Hollywood A-listers at the Golden Globes. Accepting the best actor award for his role in Joker, Phoenix praised the Hollywood Foreign Press for opting to serve a plant-based dinner, saying that is sends a “powerful message.”

He went on, “Contrary to popular belief, I don’t want to rock the boat, but the boat is fucking rocked. It’s really nice that so many people have come up and sent their well wishes to Australia, but we have to do more than that. …It’s great to vote, but sometimes we have to take that responsibility on ourselves and make changes and sacrifices in our own lives… We don’t have to take private jets to Palm Springs. I’ll try to do better and I hope you will too.”

Since October, Fonda has staged weekly protests on the steps of the capitol, all of which culminated in the arrests of big-name Hollywood actors, including Ted Danson, Sam Waterston, Casey Wilson, Paul Scheer, and Fonda herself. Today marked the end of Fonda’s D.C. “residency,” but NBC News reports that “the operation is set to move to Los Angeles.”

RELATED: Jane Fonda, Still a Revolutionary at 81, Was Arrested During a Climate Change Protest