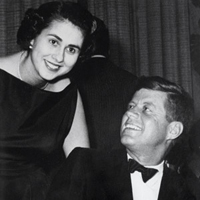 When John F. Kennedy launched his campaign to become the President of the United States in early 1960, he was a young Democratic senator from Massachusetts. His run for the highest office brought him often to California, where he met regularly with local leaders and early supporters to discuss the state’s needs and important issues. Rosalind “Roz” Wyman, then a member of the Los Angeles City Council, was one of those early supporters, and she became instrumental in organizing Kennedy’s appearance at the Los Angeles Memorial Coliseum on July 15, 1960, where he accepted his party’s nomination.

On the 50th anniversary of his assassination, Wyman, who is still a player in the Democratic Party today, tells us about her early impression and lasting memory of our 35th President.

I know how involved you were in organizing the Democratic National Convention of 1960 in Los Angeles, where JFK was nominated. But what was your first in-person impression of the President?
We used to meet at his sister Patricia [Lawford]’s house in Malibu, and we would sit around and discuss the issues that affected California at that point. He would have a group of people he would meet with regularly, and when you were not with him you would send in to a special division of his campaign the issues that were important.

My first impression was that he was so smart! He was so bright, so charismatic—and good-looking, I must say! He was charming. He was quick. He was well versed when we were together, and sometimes he would tell us great stories. It was wonderful to be with him.

Did you share any particular exchanges that stand out now?
He would tell some things about his family. He would tell us how it was important no matter what he was doing to keep in touch in his family. He didn’t let a week go by that he didn’t speak to almost every member, no matter how busy he was. I always found it impressive.

Pat was always saying “I just finished talking to Jack.” She had a funny line one time while we were out campaigning. She really didn’t like doing it—she was so shy—and she said, “How about my brother and his big ideas?” I often thought about that line after that.

When was the last time you saw the President?
I can’t remember exactly. It was probably in the White House after he was elected, the only time I was alone with him, although [Kennedy advisor] Kenny O’Donnell sat outside his door. I was there for a meeting. There was some land behind the federal building on Wilshire Boulevard, and I wanted to get it for a park for Los Angeles. There was a rule that if the land was declared a surplus we could get it for half price, and that was the only way we could afford the park.

In those days, once you got cleared to go into the White House for a meeting, you could go from one office to another. After my meeting I decided to go say hello to Kenny O’Donnell, who was sitting outside the President’s office, and while I was there he received the invitation list for a big state dinner from Jackie Kennedy’s social secretary. Well, he looked at the list and said, “We never get any Democrats in here! It’s all blue bloods!”

I said, “Don’t have any blue blood in me. I’m just a red-blooded American who voted for John F. Kennedy!”

So the President came out and he said, “Roz how are you?”

He said, “Have you ever seen the Oval Office? Come on in, I’ll show it to you.” He was so gracious and lovely.

Then Kenny O’Donnell came in with this guest list and it was like an echo. JFK says to him, “Is there anybody on the list who voted for us? Who gets to come to these parties?” Then he said, “Roz, are you invited?” I said, “I haven’t heard if I’m on the list, but if you put in a good word maybe I can make it to one of the dinners.”

How did you find out about the assassination? It must have been an incredibly difficult time.
I was on the floor with the [Los Angeles] council, and I got a call from my husband. He just said, “Roz I have terrible news. The President is dead.” I stood there for a few minutes, and then I said, “Did you say the President is dead?” And he said, “Yeah Roz, I know. It’s shocking for us all.” We were in session, so I hung up and went to the microphone—I didn’t even ask for recognition—and I said, “The President is dead.” We adjourned the council, obviously.

Fifty years have passed since then. How do you remember JFK after all this time?
I remember a great President. When he spoke, he always had something of meaning to say. When he would talk about the astronauts going up, what it meant to us, he said something of substance. He talked about the treaty with the Russians and all of the issues—the Bay of Pigs with Cuba.

I, like so many others, wonder what if he would have lived? He was worried about re-election. Would he have gotten re-elected? I thought he would. I wonder what else he would have done. He was working on Civil Rights, and then Lyndon Johnson had the opportunity to bring it in.

It was a great to have the honor to know him and to work for him, and to believe in him and what he stood for. I felt that he represented my country so beautifully.

When you’ve spent 60 years in politics as I have, you remember some moments of your political career more than others, and I remember a warm relationship with the President and the whole family. I look back on it fondly. I think America was great to have had him, at least for a thousand days.