Home Environment Will a Pair of Beloved Jewish Summer Camps Rise from the Ashes... 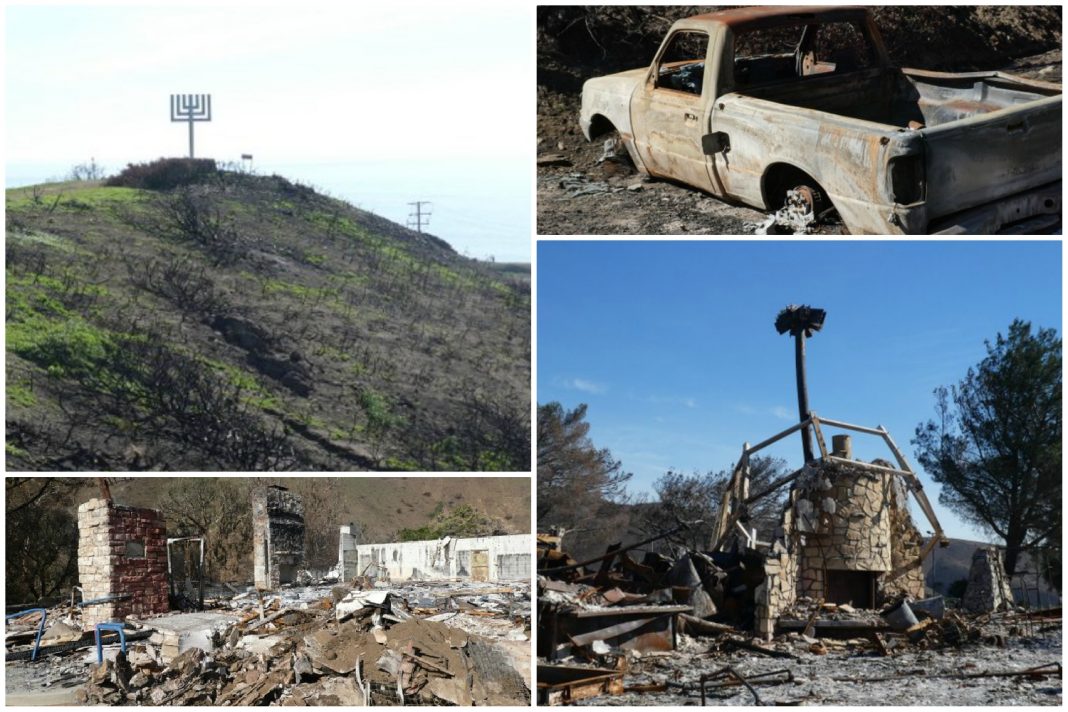 From the Pacific Coast Highway, just past Neptune’s Net, you can see Camp Hess Kramer’s giant menorah still standing. However, after last fall’s devastating fires and the winter’s subsequent mudslides, the fate of the landmark and its surroundings remains uncertain. On a recent visit to the beloved Jewish summer camp, which is still closed to the public, the nature-made destruction is so great, savage, and indiscriminate that saying it’s “of Biblical proportions” is entirely appropriate.

On the night of November 8, 2018, more than 150 students from L.A.’s Outdoor Science School were spending a week at Hess Kramer when Doug Lynn, the camp’s executive director, received a call suggesting a voluntary evacuation as the Woolsey Fire approached. At 10 p.m., they began evacuating the students. “We always err on the side safety,” Lynn says.

For much of the last 70 years, Camp Hess Kramer and Gindling Hilltop Camp, Jewish summer camps attended by generations of families and over 40,000 children, have occupied 187 acres just North of Malibu. Owned by Los Angeles’ oldest congregation, the Wilshire Boulevard Temple (WBT), the camps take up most of a hill that rises to a bluff with unobstructed views over Malibu and the Pacific Ocean. The camps are also home to myriad conferences, workshops, family weekends, and other programs including Camp Harmony, a camp program for impoverished and at-risk children.

On the night of the evacuation, Bryna Nevison, on-site events manager for the campus, helped keep everyone calm as children and parents were put on buses; a group of adults intending to have a weekend conference at Gindling Hilltop camp further up the hill was also evacuated. At around 3 a.m. on the morning of Friday, November 9, with the fires still 30 miles away, Nevison drove out of camp, exhausted but happy that the kids had evacuated safely and peacefully.

In the subsequent hours, as the winds picked up and the fire spread more quickly than anyone could have imagined, Malibu was placed under mandatory evacuation. After that, it was impossible to know if Hess Kramer and Gindling had been or would be affected. The first report that the fire had spread to the campus came via twitter, as someone who was driving by on PCH was able to film flames and smoke still rising. Still, access to the camps was closed off, so it was impossible to see the extent of the destruction.

That Sunday, November 11, NBC4 investigative reporter Joel Grover managed to get past the police blockades in order to report on the damage. Grover, who was born and raised in L.A., had attended Jewish camps himself (although not Hess Kramer), and just a month prior had been to the camp to celebrate his niece and nephew’s bnei mitzvah there. “It was apocalyptic,” Grover said of the scene. “A cloud of black smoke. There were very few people around and there were ashes everywhere.’

When Grover entered the camp that Sunday, not even the leaders of the Temple had been there. The devastation was overwhelming: 87 of the camps’ 97 buildings were destroyed. “It was surreal,” he said. “It was emotional. I went into the outdoor chapel and put my hands through the ashes of the ark where I was standing with my niece and nephew, just a month earlier.”

Wilshire Boulevard Temple’s summer camp was the brainchild of Rabbi Alfred Wolf who had grown up in Hitler’s Germany. As a young man he often found strength in leading Jewish youth on nature hikes where they could practice their religion freely in “God’s Sanctuary,” as he called it. In 1935, his life was saved when he was one of five German Rabbinical students invited to study at the Hebrew Union College in Cincinnati, Ohio. Still, 70 of Rabbi Wolf’s relatives were murdered in the Holocaust, according to his son, Dan Wolf.

Rabbi Wolf, who died in 2004 at age 88, joined Wilshire Boulevard in 1949 in charge of revitalizing youth programs. His suggestion: camping. After two summers of camping in tents in the Pacific Palisades, the temple found the Malibu location, which was donated by congregant Harry S. Mier in memory of his friend and business partner Haskel (Hess) Kramer. Rabbi Wolf personally built the camp’s stone amphitheater, one of the few structures that survived the fire but was affected by the mudslides that followed. In 1968, Wilshire Boulevard opened the nearby Gindling Hilltop camp, adding some 80 acres to the property.

When Grover left Hess Kramer that Sunday afternoon, there were still parts of the camp that were either untouched or where one could imagine rebuilding. That was before heavy rains further ravaged the site. A river of mud had raced through the camps, taking out bridges and raising the ground level by several feet in certain places. When I visited recently, the camp’s swimming pool which had been drained before the fire and was undamaged was now filled to the brim with mud. The greatest impact had been on the camps’ infrastructure: electric lines down, water and sewer systems all ruined. Due to the displacement of so much land, the ground has not settled and is therefore not yet stable enough for human visitation and re-building.

And there was another concern. Given that chemical fire retardant had been copiously sprayed to suppress the Woolsey Fires, the fear was that the rains and mud flows had dispersed those toxic chemicals throughout the property, polluting the land where children once played and slept. According to Lynn, the camps themselves were not doused in fire retardant, but there is still cause for caution. He says the EPA has already inspected the site, and is conducting soil evaluations. They continue to await results from various state emergency agencies but, Lynn says, “We will rebuild.”

For this summer, the WBT camps have rented the campus of CSUN Channel Islands, 45 minutes north of Malibu, to hold their summer sessions. When and if Camp Hess Kramer and Gindling Hilltop Camp can be rebuilt in Malibu is still unclear.

Walking around the devastation, Lynn speaks of how these camps were created to allow people a greater understanding of nature; and that in this terrible instance, nature had asserted itself. “There’s an eerie beauty here now,” Lynn says, “[One] that we never saw before.”

RELATED: The Restoration of Wilshire Boulevard Temple Became a Doc About the Power of Place