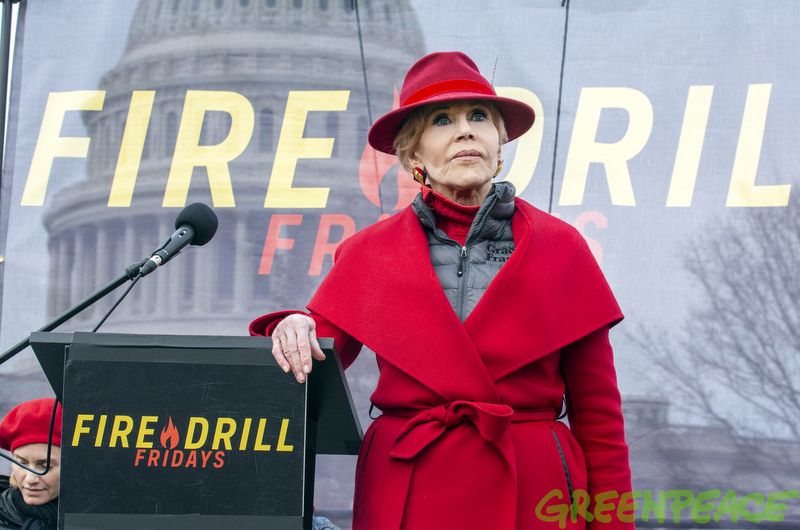 Jane Fonda is willing to make a scene to raise awareness about climate change. The 82-year-old actor and activist has staged 14 weeks of her Fire Drill Fridays rallies in Washington, D.C., many of which have ended with her and her fellow protestors being arrested or detained by local law enforcement. Zip-tied by her side have been some famous friends–Martin Sheen, Susan Sarandon, Joaquin Phoenix, Sam Waterston–who share her passion for raising awareness about climate change. In December, 138 people were arrested during a Fire Drill Friday action at the Hart Senate Office Building.

Now, the civil disobedience is coming west. Fonda will be staging a Fire Drill Friday rally at L.A. City Hall on February 7 at 11 a.m. Working with Greenpeace, Fonda is set to be joined by an impressive group of environmentalists, activists, and celebrities.

“We are excited to build off of the extraordinary energy from our time in D.C. and bring our call for action to Los Angeles,” Fonda says. “During this key period where action is essential and inaction is criminal, we’re going to massively scale up to take on the climate crisis. We know this is one of the last possible moments we have to change course and save lives and species on an unimaginable scale. The only thing that can stop the climate crisis is people organizing to demand change.”

After the L.A. City Hall event, Fire Drill Fridays will move around California, popping up at different locations, including oil and gas operations around the state. In coming weeks, Fonda, Greenpeace, and Last Chance Alliance say they will be launching a series of Fire Drill Fridays-inspired events across the United States.

RELATED: Steve Mnuchin Thinks Greta Thunberg Needs to Go to College Before She Can Speak on Climate Change